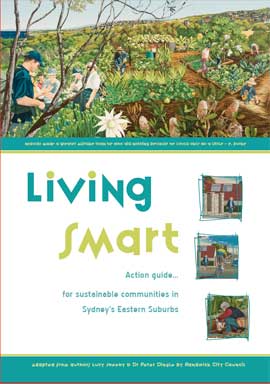 IN TERRACIRCLE INC’S SECOND PROJECT within Australia, the writing of content for a community sustainability action guide has been completed to its first draft and has been tested.

The trial of the Living Smart Action Guide took place during the first pilot presentation of the course in late 2008. The course, offered by Randwick City Council through their Sustainability Education Officer, Fiona Campbell (a TerraCircle associate), targets citizens of Sydney’s Eastern Suburbs who have made, are considering or are on the verge of changing the way they live so that it is more sustainable.

Council’s established sustainable living courses and workshops have disclosed considerable citizen interest in being proactive in making the change towards sustainability. The Living Smart course offers a longer, more intensive course for motivated people. In terms of ideas diffusion in society, these people are the ‘early adopters’ and those in the pre-change phase who are considering changes to their lifestyles.

The Living Smart course was brought from Western Australia, where it was devised, by Fiona Campbell and Council adult educator consultant, Renata Sheehan, in 2008. The course has been quite successful in Western Australia, however considerable work had to be done to repurpose it for NSW conditions, specifically for Sydney’s Eastern Suburbs. This included the localisation of the Living Smart Action Guide and writing additional material for inclusion. The Action Guide takes the form of print pages supplied to course participants a week prior to each of the eight meetings. The idea is that participants come to the meeting having read that week’s content. By the end of the Living Smart course, participants have a reference book on sustainable living. At the completion of the course, participants are awarded a certificate by Randwick’s deputy mayor.

Topics covered in Living Smart, and which appear as chapters in the Action Guide, include:

In addition, the Action Guide includes a chapter briefly introducing the geography, built environment, indigenous history and biogeography of the Eastern Suburbs bioregion. An introductory chapter on global challenges has been included to provide a global context for householder and community actions.

Revisions for the second draft of the Action Guide include refining existing chapters, adding more diagrams and photographs and producing a ‘food smart’ chapter on food issues, Sydney’s urban food system and the economic and environmental importance of localised supplies of food.

The food chapter has been planned because of the growing realisation that the first and probably ongoing large scale impact of climate change will be regional, and perhaps a global, food crisis. Research findings from last year’s University of Melbourne project, Sustainable and Secure Food Systems for Victoria, are included as they demonstrate the critical role of food choices on domestic energy consumption (and, therefore, greenhouse gas emissions), water consumption and waste production. Material developed by the Sydney Food Fairness Alliance will also be included.

Production of the NSW iteration of the Living Smart Action Guide is being done by Russ Grayson, a member of TerraCircle. TerraCircle’s first activity in Australia was a community training workshop in compost production for Wahroonga Council.

Adrift in a strange land