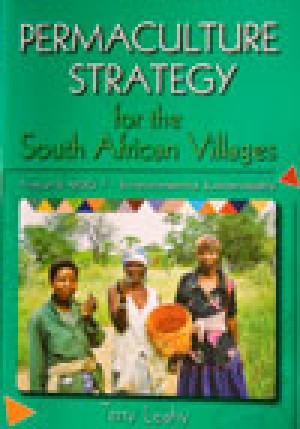 This is a manual on the African implementation of ideas in the permaculture design system and as such it is a reality-based volume reporting what has been done and what could be. For practitioners of international development and and permaculture as overseas development assistance, this is a must-read.

These are all valuable books by knowledgeable authors. Fewer, however, are books applying permaculture design to specific national and cultural settings. There was Getting Ready, a publication a team of us here in Sydney produced in the 1990s for people planning to apply permaculture design in an international development context. That achieved a level of popularity and the support of the Permaculture Global Assistance Network, an initiative that has unfortunately never been replicated. There was Solomon Islander, Joini Tutua, wit his book Sapa. It did not address permaculture in particular, rather a home and village-based approach to organic agriculture and food security in his home islands. That, too, experienced a level of demand among permaculture educators in Australia.

Now, Terry Leahy has added to this modest library of culturally and regionally specific permaculture literature with the release of his Permaculture Strategy for the South African Village.

A book for development workers

I first met Terry while he was giving a permaculture workshop in the park across the road from the building where Fiona Campbell, Morag Gamble and Evan Raymond (SEED International) and I were attending a UN conference in Newcastle in, I think it was, 1996. Since then, Terry — he’s on the academic staff at Newcastle University — has gone on to author permaculture and sustainability related material which you can find on his university website.

The stimulus for Terry to write Permaculture Strategy was South African students attending his course at Newcastle University and his spending several months living in South African villages. This provided the visceral experiences that informed his book and the platform through which to develop his ideas.

The product of that experience combined with Terry’s critical thinking coming from his work in academia to produce a book that is surely of great use to people working in South Africa. In it, the chapters cover permaculture and the Millennium Goals, why agricultural projects fail in South Africa, promoting permaculture in the villages, jobs and entrepreneurialism, national myths and local strategies and more.

As a book about permaculture strategies and ways to implement them, Terry devotes a chapter to the idea of a ‘food safety net’ for villages and reiterates guidelines made by Bunch in his important book for international development workers, Two Ears of Corn. Terry goes into the components of the home base such as housing, the kitchen, fencing, water tanks, mulch/fodder/wood/compost, fruit and nut trees, cropping poultry and more.

Appendices include a plant list, plans and diagrams for the homestead and green manure and cover crops.

Questioning what we believe

Terry also applies his critical thinking to the meaning of permaculture itself, and he doesn’t hesitate to question accepted permaculture beliefs. To do this is important, of course, because if we don’t revisit core beliefs and practices then we risk becoming irrelevant when things change.

He warns that permaculture may be seen as being equivalent to environmentalism is we persist with even parsimonious use of nonrenewable resources, as Bill Mollison proposes in the Designers’ Manual. Permaculture, Terry suggests, could be better situated as a “ …set of topics within environmentalism” and that it organises agriculture and the design of settlements to fit “…within the goals of the environmental movement as a whole”.

What I am getting at is this. Permaculture, at basics, is not a philosophy of preservation. It is one of change and development. That is, permaculture design sets out to create, to build, to change for the better… to develop. Preservation is about the status quo. Permaculture is not. An illustration: environmentalists have been responsible for displacing indigenous people from their hunting grounds and the lands from which they have traditionally drawn resources. Permaculture would see those people not as some alien thing in the landscape, but as part of that landscape itself in the same way that people in the big city are an integral part of the landscape that they inhabit. Permaculture would propose that those people retain their traditional rights and would apply design thinking to solving the environmental or resource difficulties their use of the land creates. And, they would do that directly with those people.

Enlightened environmentalists, presumably, would do the same thing, however environmentalism’s record is different. The point is that permaculture is about satisfying human needs in a way that does not degrade the resource base or the environments we live in. This involves social, economic and political considerations, as well as environmental planning, and it is in this broader ambit that I see permaculture as being quite different to environmentalism as it is popularly depicted.

Terry also questions Bill Mollison’s idea that “without permaculture there is no possibility of a stable social order” that appears in his Permaculture — A Designer’s Manual. Terry writes that he is unsure that a stable social order is always a good thing, and that, providing “ …no one gets hurt and the environment is looked after”, then why is social change such a problem?

He then goes on to redefine permaculture for a South African development perspective after bravely calling the definition of permaculture in the Designers’ Manual a “dog’s breakfast”.

There’s so much more in this book… a visit to permaculture’s ethics, discussion of the role of the food forest model, of plant types that might be suitable and on into some of the principles more recently promulgated by David Holmgren. It’s refreshing to read new interpretations of these principles.

A word or two about Terry’s graphics. All too often we see photographs in otherwise respectable books that are reproduced at too small a size, that are poorly focused and poorly processed – or, most likely, not processed at all. It is as if the publisher’s graphic designer had never heard of Photoshop, or it could have been that the images supplied were simply too ratty to do anything about.

Not so this book. The images — there are both colour and black and white — are often reproduced at half-page size, so detail can be seen. Some are larger, some smaller but not too small. They are also given a little extra visual zest by application of a shadow effect to lift them from the page.

Line drawings are likewise of good size, and clean. Tables, too, are clean and fine-lined, lacking the clunky disfigurement of thick, visually heavy linework that mars so many publications. The subtle use of colour, cell padding and white space lifts their useability as summaries and references. And, although the book is text-heavy (ie. it has a lot of text), the designer’s use of the two column format, generous line spacing and gutter to separate the columns, and white space on the page, makes it easily readable.

The graphic design of publications is so important to their useability and it is pleasing to see that John Dick, of PI Productions Photography, who did the design, has paid a lot of attention to visual design.

Is it real value?

I don’t mean value in monetary terms, although Terry’s book is that. I mean value in terms as an information and ideas source as well as a knowledge base for people who might one day find themselves working in development in South Africa.

But the book is more, for development ideas applied in one country can often be repurposed for application in another. That is a round-about way of saying that the book may well be of value to people contemplating entering the challenging and often difficult working world of international development and those already engaged in it.

Proceeds from sales will be used to ship copies to South Africa for distribution.

NGO workers in developing countries may be eligible for free copies. Enquire at the below email.