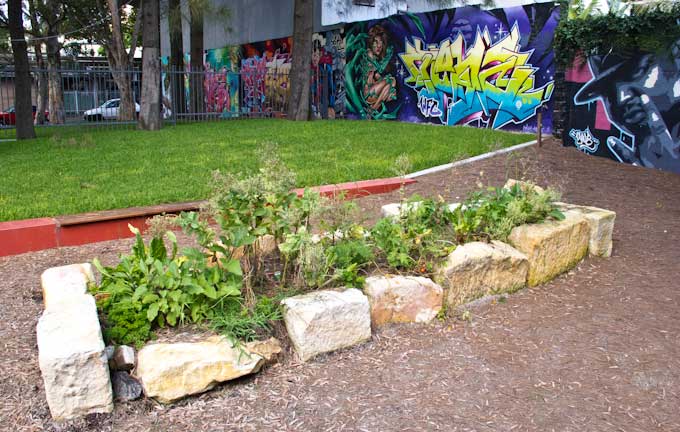 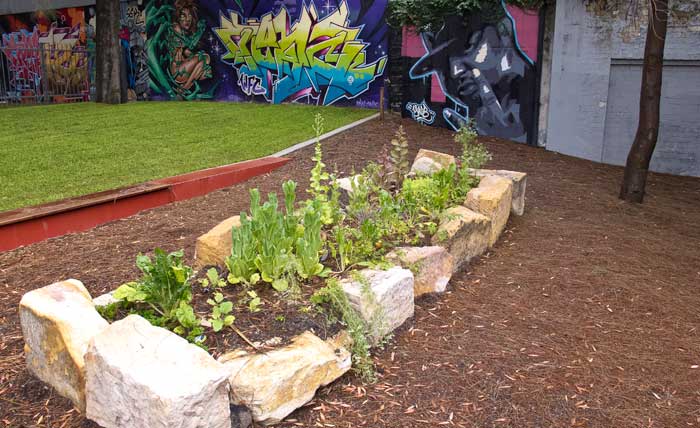 ONE OF MY FINAL PROJECTS before finishing my tour as the City of Sydney’s community garden coordinator was to get the Bourke Street Park Community Garden started in Wooloomooloo. This will be Woolloomooloo’s second community garden, the first one, in Sydney Place, now being in full use.

The fact that a community garden was coming was highlighted on the opening day of the renovated Bourke Street Park by Lord Mayor, Clover Moore, in late 2011. An area at the rear of the park was allocated for the garden and for the later addition of a community activity shed—intended to be an old, converted tram a number of which the City has in storage.

The design of community gardens is a great deal more than having a landscape architect draw up a site plan—that comes later as community gardens are people-driven, not design-driven initiatives and social design comes first. Collectively, we have enough experience in developing community gardens around the country to know this. Social design is participant-led rather than the design-led approach common to professional designers and is a better approach to community garden development. Faith Thomas and I used this approach in setting up the Carss Park Community Garden.

In Woolloomooloo I wanted as much community involvement in the design process as possible because this provides a greater sense of project ownership by those who will use the garden. The prospective community garden group visited the site during the planning process and a couple meetings were organised.

Involving users is part of the participatory design process known as placemaking and it stands in marked contrast to the council-and-designer-led approach. It seeks direct user-participation in creating the places they will use. The value of doing this has been proven over the past 30 plus years of community gardening in Australia.

So, where’s the community?

The first phase of the development was to enlist council’s City Engagement crew who organise community consultation. We devised a simple expression of interest document and circulated it via letterbox drop and in local media. This enlisted around 30 responses including one from a rehabilitation training provider assisting some of Wooloomooloo’s sizable homeless population.

Next, the first of two public meetings took place at the community centre across the street from where the garden would go.

Needs analysis is part of the social design process and it formed the core of the first public meeting, the purpose being to identify what those who responded to the expression of interest, and who turned up for the meeting—around a dozen people—wanted to do in the space and what they wanted from their community gardening experience.

Needs analysis is a necessary part of community garden design as it informs the social and site design. Competent designers do not turn up with preconceived ideas of what gardeners need. They empty their minds and listen to what those who will use the garden want, then utilise that information in the design of the garden. To draw a comparison with the formal landscape design process, it’s like developing a design brief datailing what the client wants.

Some of the needs coming from our session included space for horticultural therapy, vegetable and herb growing—mainly as shared growing space as well as some personal plots and, in one case, orchid growing.

We know from years of experience now that working constructively with people is the hardest part of successful community gardening. In contrast, the horticultural side is more easily learned.

Our second community meeting was to complete the social design process by developing a simple governance arrangement. This covered how decisions would be made, how conflict would be dealt with and how the group would communicate.

Because the group was eager to make a start and because we didn’t want it to lose momentum and risk losing participants, I produced a simple gardeners’ agreement and this was accepted by the group. I suggested it should be regarded as a temporary agreement and amended later if needed, modelling it on an earlier community garden document produced for another community garden start-up and the council it was working with.

Had the need to maintain momentum not been so important—its importance was made clear to me at the meetings—I would have adopted a more participatory process and spent time developing a management plan with the gardeners, however they wanted to expedite the garden and agreed with my suggestion at the first meeting that I produce a guide. This is something I have learned in working with community garden groups. Some want full participation in the process of planning and starting the garden while others are less interested in that.

The next step was to conduct a participatory site analysis.

Information gained from this will be combined with that developed during the social design process to produce a concept plan. At the meetings we discussed how this would be drawn up by the consultant landscape architect engaged for the process (Steve Batley from Sydney Organic Gardens, perhaps the most experienced community garden designer/educator in Sydney), brought back to the group to discuss changes and then developed as a working plan is as short a time as possible so as to move rapidly to the construction phase.

I planned the participatory design process and commissioned Steve just before my posting ended at the City. I would not be at the City for the construction phase and the handover of the community garden, however I did what I could to get it going as a participatory process and to maintain its momentum.

When the Bourke Street Park Community Garden comes into use it will supplement the existing Woolloomooloo Community Garden and provide new opportunities for local people, including some of the homeless associated with the local training organisation.