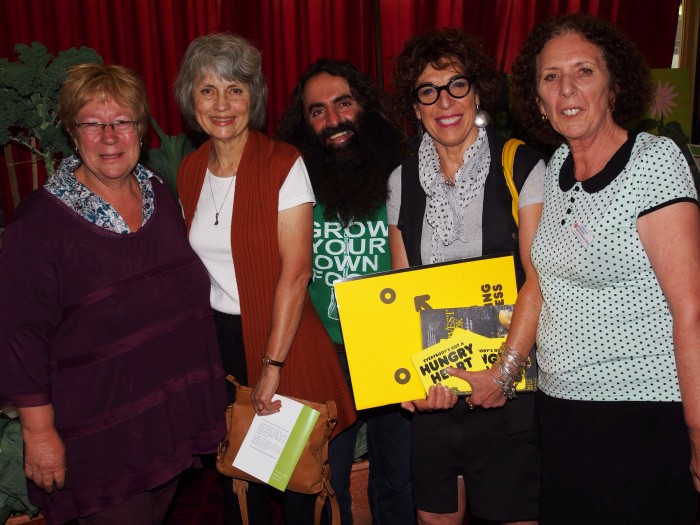 IT WAS A TALE of two farmers. The first came as a call from a Sydney region grower. Would Ronny like to come and collect some oranges? It was cheaper not to take them to market, said the grower. Two tonnes were collected. The second farmer to call had 16 tonnes of carrots. The supermarket buyer had rejected them because they were not straight enough or orange enough. Cosmetically imperfect, the whole 180,000 of them, though this says less about the farmer than the skewed and somewhat bizarre thinking behind the supermarket’s buying practices.

These were the tales told by Ronny Kahn, the social entrepreneur who started Sydney’s food rescue organisation, OzHarvest. Ronny was one of the speakers at the celebration of the Macarthur Food Security Project, an initiative to network, educate and multiply local food initiatives in the Macarthur region around Campbelltown, about an hour’s train journey south-west of Sydney’s Central Station. Auspiced by Macarthur Diversity Services and led by Sue Gordon, the day’s event marked the conclusion of the project. 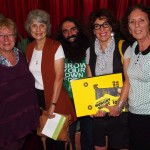 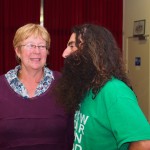 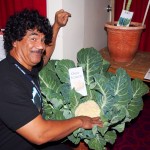 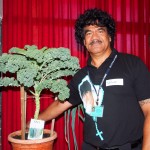 Ta’ane Tupola with leek he grew on display at the Macarthur Food Security Project event.

Since she created OzHarvest, Ronny has become an advocate for regional food systems and for reducing the 300,000 tonnes of food wasted in the Sydney region by the restaurant and catering industry and others. Being an expert in the salvage and creative reuse of food, she went on to criticise the ‘best before’ and ‘use by’ dates on food products because they, too, lead to food waste as people discard perfectly good food simply because the dates have expired.

According to Ronny, and to other speakers at the event, cheap imports of unknown provenance sold through the supermarkets — we don’t know how they have been produced, what has been been used to grow them or how they were produced — are putting Australian farmers out of business. She called upon us to support local producers.

“Change is possible”, she said, “and we are the trailblazers”.

WOMAN WITH IDEAS FOR CHANGE

She might be a petite woman now nearing 70, however Rosemary Stanton’s message about the food we eat is as strong as it’s always been. She reiterated Ronny’s comment about imported food by saying that food production standards in exporting countries are likely weaker than Australia’s.

The current food system, said Rosemary, promotes overconsumption — it is often difficult to buy single items. “We don’t know what the ingredients mean, people often can’t pronounce them”, she said, pointing out the link between food products and the triple increase in diabetes over the past 20 years. In a country in which around half the population eat their meals in front of the television, she believes the cost of treating an increasing incidence of the disease will finally trigger government to do something about food quality.

“We have to learn about the seasons and their food”, said Rosemary in describing solutions. “We need to participate in the food production process, to use, select and share foods, to promote flavour and change our attitude to food waste.

“Gardens are important for local food, home gardens, gardens in schools, community gardens, fruit trees on streets and in parks”.

Costa Georgiardis, host of ABC Gardening Australia, permaculturist and supported of the Australian Food Sovereignty Alliance’s Peoples’ Food Plan, told of how a viewer of his program told her son to watch ‘the hairy man’ on the ABC. Hairy man though he might be with his curly locks and unkempt beard, Costa has become an advocate for a fairer food system for Australians, championing local growers and home and community gardeners around the country.

“Food is a community blender. Cheap food is also cheap on our farmers, our health, our environment… and some day we’ll have to pay for that”.

He went on to congratulate those present from the organisations that make up the Macarthur Food Security Project.

“It’s about having a go, about recognising the skills of people in your community”.

His speech finished — Costa’s speeches carry serious messages peppered into acceptability with lavish sprinklings of humour — Costa and I launched the Australian Food Sovereignty Alliances’ Peoples’ Food Plan. Not that we had prepared anything for this, our presentation was rather impromptu, we did a simple Q&A out there in front of the audience and I suggested they could contribute their ideas for a better, fairer food system for Australians by sending their ideas to the Alliance.

It was good to hear self-described ‘community activist’, Peter Butler from East Campbelltown Community Garden, later tell the audience that “We need a revolution and it starts at the grassroots, and part of that revolution is the Peoples’ Food Plan… and we can be part of that too”.

The second half of the day was taken up by the regional food initiatives brought together by the Macarthur Food Security Project.

The Macarthur Silverdale Neighbourhood Centre’s Healthy Families project focuses on healthy eating and consists mainly of mothers from the area who made use of the kitchen at Warragamba Baptist Church. One of the outcomes, said spokeswoman Julie Longford, was the creation of a social network, demonstrating the social and well as the nutritional benefit of people gathering around food.

A project of South West Macarthur Cultural and Community Centre based at a council facility, the project attracted people aged 20 to 82 who came together to share their food knowledge and recipes, and who are looking at opening a community pantry.

“I rally enjoy gardening, I can tell you that”, said Ta’ane Tupola, the multicultural liaison officer for the NSW Police in the area who is behind a number of community growing initiatives.

Tall, muscular and with a mop of dark, curly hair, Ta’ane has been a police officer for a decade and started his gardening projects at a local men’s shed. His stature is reflected in the vegetables he grows, some of which were on display at the event. The leek and broccoli were among the largest I have seen.

“I’m used to growing tropical vegetables and was unfamiliar with these”, he said, pointing to the cauliflower, leek and broccoli behind him. “I grew them using how I already knew, by burying food waste in the ground and planting them there”.

Ta’ane also works with youth in need of guidance. Costa said of his role with the police: “This is not about political correctness, it’s about connections… community happens”.

An initiative of Camden Community Connections, the organisation set up workshops about food choices, attracting people in the 15 to 60 age range. They are now starting a cooking club.

Gardening a small patch of church land and assisted by TAFE Outreach, the initiative started as church outreach, then became independent. The organisation offers a cafe service three days a week that, according to spokeswoman Jackie, is where people can meet others over coffee and serves as a soft entry point for people suffering distress. Here, there’s the opportunity to start a conversation.

The garden team produce food for the cafe that benefits from the generosity of local people who donate excess fruit and produce from home gardens. A community pantry has been started. “People make a donation and take away $50 to $60 worth of food”, said Jackie.

Started in 2009 by Tahmoor Uniting Church to promote social values and what spokesman, George, described as ‘church things’, there was initially no focus on food security. But that came and it added to the Tahmoor United men’s shed and monthly market.

“It’s about teaching people to grow food, it’s about community and inclusiveness”, explained George. “There was an 18 week TAFE course and the new garden built on the existing small, raised garden. It’s a child-friendly garden and there are mothers and their kids. There’s the idea of a local food co-op, too”.

Describing the congregation as ‘multicultural’ in the sense that the congregation is of mixed Pacific Islander, African and European people combined, rather than separated into different services, the project features a small food garden and educates in “construction, recycling and upcycling… we care for the Earth”, said their spokeswoman.

“We have a low cost water collection system using olive drums. We can’t afford to buy and have a water tank installed”.

Planned are a community kitchen and children’s garden.

A community garden started by a librarian? Yes, started by the manager of library services at Campbelltown Library around a year ago. The garden is on council land adjacent to the library on what was a disinteresting patch of bare lawn.

There’s a broad range of ages and skills, courses are planned and 80kg of produce was grown last year.

Social isolation is an issue in the economically declining area, according to Peter Butler.

“If you work at it, it will happen”, is the conclusion Peter has drawn from his experience in stimulating the garden which is located on church land. He now wants to start community cooking using the garden’s produce.

Community Garden for People With Disabilities

Ravi, who leads this project for Northcott Community Services, is a young man with the energy to make something new happen.

The focus is on sustainable living, health, kitchen gardening and cooking to encourage independent living for people with disabilities.

“The first people to leave the project now have their own kitchen garden”, said Ravi.

A project of the Cottage Family Care Centre, the focus is on bringing families together and sharing opportunities around food. “We give people a positive experience around food”, said their spokesperson.

The project has a small garden and meets weekly in the kitchen.

An initiative of a local health service for the Aboriginal community, the focus is nutrition and physical exercise.

Mark works with Ta’ane Tupola through the PCYC. He said that Costa was to blame for getting him into this type of police work when his parents said to him: “You’ve got to watch the hairy man show”.

“We go to peoples’ homes and find people are hungry”, Mark said.

“We started small. You’ve got to find the kids with passion, and if you’ve got a passion for things then you can make it work. If I could do it then anybody can”.

Mark’s observation: “Be generous with your project and that will come back. If I give away what I have you will get it back.

“Fresh veges are so much better than the canned stuff”.

Seed saving was something a number of these projects had in common, as was linking the community garden to the nutritional act of cooking in company. The other commonalities were the presence of enthusiastic people who have an ethic of serving their communities, churches taking a social role, support from local business and community gardens serving a combined nutritional/educational/social role.

What we saw at the conclusion of the Macarthur Food Security Project was a demonstration of people working with limited resources to make something worthwhile. The projects were not the result of airy thinking but were firmly anchored in community needs, giving them that practical edge and earthiness that comes with work-in-the-real-world.

It has been a credit to Sue Gordon and her supporters, an example of applied social permaculture action on her part and the result, I suspect, of hours well in excess of her usual working day.

Many of the projects plan to continue, ensuring that the Macarthur project leaves a local legacy.