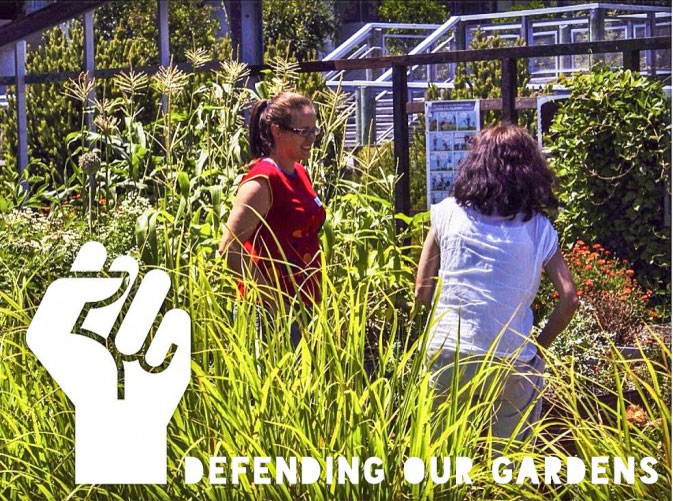 This article was written for the Australian City Farms & Community Gardens Network following criticism in February 2014 of community food gardening and farmers’ markets by a representative body of the vegetable industry.

IN MID-FEBRUARY 2014, community gardeners around Australia suddenly found themselves under attack from the horticulture industry. Ausveg, a national industry organisation, had just issued a media release congratulating the federal government on its axing of the Community Food Grants scheme and alleging that community gardens are a biosecurity threat to the industry. Ausveg also welcome the fact that axing the grants also deprived farmers’ markets from benefiting from them.

I first became aware of the media release when Nick Rose, coordinator of the Australian Food Sovereignty Alliance emailed me, asking if the Australian City Farms & Community Gardens Network (ACFCGN) was interested in responding. His organisation was.

As usual, old media lagged social media in acting on this, and as word spread through social media about Ausveg’s allegations, community gardeners became incensed, and they were making that known. Here was an industry lobby group attacking small community organisations and making allegations that gardeners knew to be imaginary.

By the end of the following day the Australian Food Sovereignty Alliance had produced a media release rebuffing Ausveg’s allegations and criticising their support for the government in axing the grants scheme. That was to attract media coverage both on old media such as radio as well as on social media. Permaculture Australia, a national organisation managing the Permafund scheme and nationally accredited permaculture education, with members active in community gardening, followed with a media release over the following two days. The Australian City Farms & Community Gardens Network added our own media statement. So did the Canberra Organic Growers’ Society which auspices a dozen community gardens in the ACT.

Suddenly, the often placid worlds of community gardening and permaculture design had inadvertently acquired an urgent capacity for advocacy.

NUMBERS MATTER
Senator Christine Milne, the Tasmanian who heads Australia’s Greens party, had spoken with ACFCGN people during a 2010 Canberra University seminar on community gardening. She had offered advice that the Network was acting on. She explained that the Network would need to develop an advocacy capacity if it was to represent the practice of community gardening and related activities and to act in gardeners’ interests.

One of her suggestions was that the network develop some idea of the numbers engaged in community gardening and the number of gardens in Australia. The Network is developing an online map of community gardens, though putting a figure to the number of participants nationwide is quite difficult. This is due to seasonal fluctuation in participation in community gardening and to people coming and going, especially in high rental areas. Then there’s the up-and-down cycle in participation over time, with gardens going from participation so low that it makes garden maintenance difficult, to having so many people they have to start waiting lists for membership.

A VALID URBAN LANDUSE
Thanks to their rate of growth over the past 15 years, community gardening and allied, food-related initiatives are now integrated into the urban fabric of our country. Here, they are affected by legislation and public perceptions, both of which could be influenced by their critics.

It was too important to ignore and hope it would go away. The Network acted by countering Ausveg with its own media release that positioned Ausveg as out of touch with community gardening and suffering a pathology of error, as did the Australian Food Sovereignty Alliance and the Canberra Organic Growers’ Society.

A STRATEGY OF ENGAGEMENT
If the civic agriculture movement — I should explain that this is a collective term sometimes used to describe community and school-based food gardening, food exchanges, Landshare, home garden food production and the like — is to develop a self-defence capability so as to fend off future critics and the reneging of government on its promises, as in the withdrawal of the Community Food Grants scheme, then it might adopt the following practices.

Context localism in the big picture
Local stays local unless it is embedded in the regional and national context of civic agriculture. Without collaboration across community gardens and other community initiatives, gardens remain isolated and politically weak, and subject to stronger forces of the political and economic kind. The practice of localism by itself can be isolating.

Darren Phillips had learned this by the time he set up the Network in 1995. His research into community food and employment initiatives had made him very much aware that these worthwhile endeavours suffered the isolation of being local phenomena without connection to the larger context. The Network, he said, would be the means of connecting these initiatives and of sharing learning and knowledge.

It was a purpose in setting up the ACFCGN that it would network community gardens and similar community food initiatives and in doing so establish a kind of voice for civic agriculture, overcoming the isolation of localism while, at the same time, encouraging people to act locally. Think of this as networked localism.

Grow some political savvy
Politics is — let’s not call it an art, for that is something it isn’t — the means through which we interact with individuals, institutions and other organisational entities to reach some decision, solve some problem or start some new initiative.

Having political savvy is about gaining the skills to navigate the Byzantine labyrinth of local, state and federal government and about understanding how to approach people, how to word media releases and how to frame ideas so that they appeal to particular political and economic biases.

Avoid parties
It’s quite clear now that political parties, especially the Big Two, are held in disrepute, even contempt, by a growing number of Australians. Evidence for this are declining membership numbers and politician credibility and, at the same time, an increase in participation in civil society social movements. It seems people want to bring positive change but that political parties are not seen as the way to do that.

The move today seems to be towards social movements rather than political party membership. These come and go, decline and re-form and reconfigure for new challenges. They eschew the old, permanent structure of the parties. They are adaptive and they are agile.

The untrustworthiness of parties is a good reason for the practice of civic agriculture to maintain its political independence and not offer support or alliance with any parties.

LET’S RECOGNISE OUR STRENGTHS
Community gardening has nearly 40 years of history and experience in this country. Today, it forms a populous element within the incipient fair food movement that is gestating across the nation. This movement is still in its early adopter phase. However, with its socially mainstream acceptance and institutional support, the community gardening element seems to be flowing into the early mass adoption phase.

The fair food, let’s call it a proto-movement, has yet to recognise its unity and strength and is yet to be fully born, but if that does happen then community gardeners who choose to identify as part of it will form perhaps the most numerous, geographically decentralised element.

THREATS AND OPPORTUNITIES
When we stand back and look at the Ausveg incident, and when we include not only the media releases issued but the social media comment so critical of Ausveg as well as the personal attempts to make contact and educate Ausveg, we see the vestiges of an innate self-defence capability developing in the civic agriculture/community food sector. Like other practical initiatives, it is experience that has shaped action rather than theory.

In a way, the response to the Ausveg allegations took the form of a spontaneous swarm. It was largely uncoordinated and organic in that it emerged from networks — it was a self-defence capacity as an emergent property of those networks. It suggests the value of building an informal alliance of mutual interest around the alternative food system as the basis of developing a cohesive capacity for rapid response to threats, as well as to seizing opportunities as they arise.

Movie of a troubled life