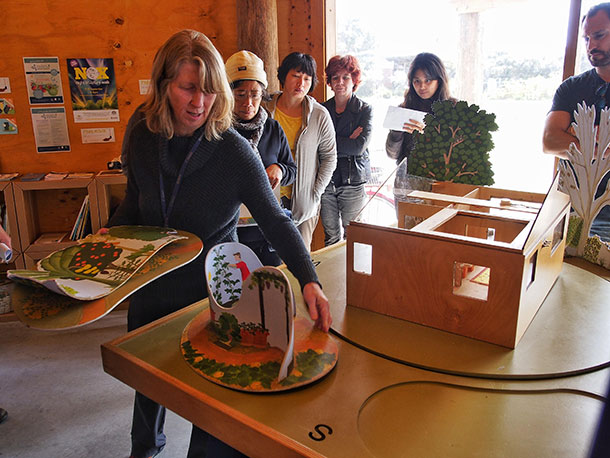 CITIES are unfinished places. With old buildings being demolished and new ones being built they are in a constant state of rebuilding.

It can be the same with the homes in those cities. As generations replace each other in those homes they modify them to reflect current ways of living and thinking about family, livelihood and lifeway. It is this churn in building and rebuilding the interiors and exteriors of our houses and apartments that underwrites the renovation industry and sustains the hardware shops favoured by those taking the DIY route to home renovation.

Nobody knows more about renovation than the architects called in to redesign our old-homes-made-new. Terry Bail is one of these. He is an architect catering to the growing demand for renovations making use of environmentally sustainable building materials both new or recycled.

In September this year Terry led a workshop — Renovating With Permaculture — in the new, recycled-materials building, the classroom at Randwick Community Centre. It is no coincidence that Terry was the architect who designed the structure. Attending were not only local Sydney Eastern Suburbs residents but people from as far away as Campbelltown, out on the city’s far south west fringe.

“Let’s think about what permaculture might be”, said council sustainability educator, Fiona Campbell, who organises the community resilience workshop and course series at the community centre.

As usual when she asks that question at workshops, there’s quite a range of understandings. At this workshop it was interesting that many of those attending had a reasonable understanding of the system, and not only those who had attended previous workshops that might have included Introduction To Permaculture. Architect Terry Bail discusses insulation with participants at the Renovating With Permaculture workshop.

Participant understandings of the permaculture design system have changed over time. Fiona has tracked this over the years and finds there been a noticeable increase in the public understanding of permaculture. For sure, there still are many who don ‘t know of it and many of those who have heard of permaculture consider it a type of organic gardening. More recently, though, there’s been an increasing number of workshop and course participants who see permaculture as a design approach, though what that actually involves is a variable understanding.

As Fiona started to draw a mindmap on the whiteboard people called out what they thought was included in permaculture. Occasionally she would stop and ask someone to explain a bit more about that they said, in doing so opening a deeper conversation on the design system’s components.

“Now, let’s look at the principles behind permaculture that are relevant to renovating with its ideas”, she followed-up with.

Terry and Fiona explained that each of the inventors of the permaculture design system, Bill Mollison and David Holmgren, had formulated their own sets of principles but that they were compatible and complementary. When it came to renovating, those relevant were chosen. “They form a way of thinking about what we’re doing, and a guide”, explained Terry. Assisted by the examples of materials and fittings Terry had at hand, the details and technologies of renovation were now the topic. Then it was time to take a walk.

“Let’s take a walk now and look at some of the things we’ve been talking about and how they have been used in retrofitting this community centre for energy and water efficiency”, announced Terry.

Lighting, shading devices, low VOC materials (volatile organic compounds that are outgassed by some building materials and which can be an irritant), insulation materials, the use of ceiling fans instead of air conditioning, water storage tanks to make best use of rain falling on roofs, photovoltaic and wind energy technology, solar hot water and the community centre’s public reedbed toilet were some of the design innovations and technologies visited.

Sitting on seats is no way to run a workshop, which is why Terry and Fiona include the walkabout of the community centre and its design and fittings after the first part of the workshop, covering basics, that is spent inside the classroom. Seeing, touching and watching something work is a type of active learning and supplements what has been discussed in the classroom.

Doing this engages participants in the first two phases of the ‘action learning‘ sequence — look and think. It is then up to them to enact action learning’s third phase — acting — when they are ready to put into effect what they learn at the workshops. The process is cyclic and, after taking action, the look > think cycles follow again.

Even the classroom session is participatory, the pair making use of question and answer to extract knowledge and experience from participants and making use of props such as material samples and technologies that participants can handle. Fiona makes use of the strategic questioning technique known as ORID, which takes the form of a conversation around four types of questions: Objective > Reflective > Interpretive > Decisional (training in the ORID technique is provided in the community leadership course offered at the community centre).

Morning tea break is an important time. It is not only the chance for a break but a time for participants to ask questions of the presenters and to talk among themselves. Allowing sufficient time for this is built into the workshop plan. Fiona makes sure that brewed coffee is ready for those who prefer that to the less-appetising instant, that there is a selection of teas and that better food than the sweet, fatty biscuits often offered at workshops is avoided, Fresh fruit is supplied. Participants in past workshops have commented on the better food provided.

As a trained mathematics teacher Fiona plans her workshops on the basis of sound educational practice, drawing influences from recognised experts like Bob Doppelt, health researcher Dr Prochaska and his behaviour change model and her own teacher training. Doing this is important when teaching adults so as to effectively enrol them in their own learning process.

One in a series

Renovating With Permaculture is one of a series of workshops and courses that make up the Randwick Council sustainability unit’s community resilience education program.

The program aims to provide the knowledge and know-how for local people to introduce more resilient systems into their homes, lives and community.

Workshops and courses include:

The workshops and courses are booked through the City East Community College. Check their website to see which are coming up.

The OM1 — a photographic tool for the mountain walker