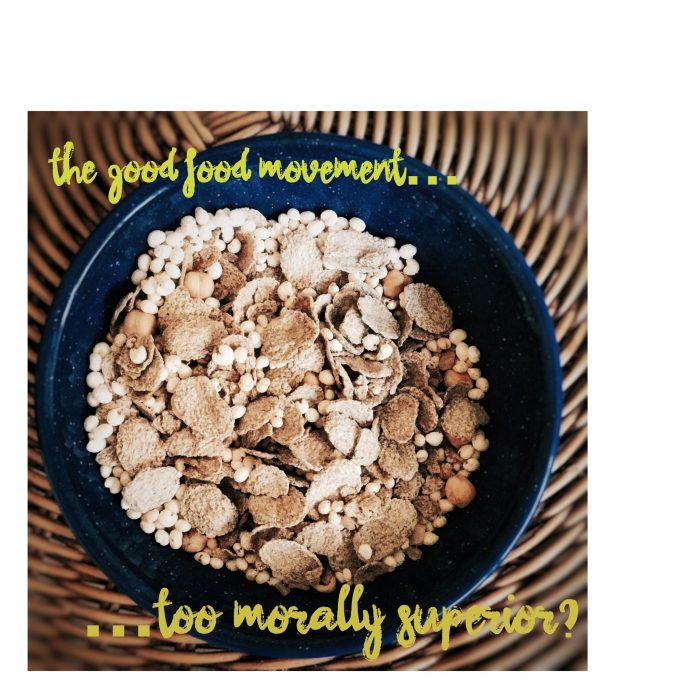 IS THE FAIR FOOD MOVEMENT being inadvertently elitist and morally superior? Does it position its participants above people who do not share its food values?

Yes, says Rachel Ankeny, a history professor at the University of Adelaide in South Australia in an article originally published in The Conversation and picked up by the ABC.

Rachel comments on the moral superiority of some good food aficionados and their judging others when she writes that: “(our research shows that) parents in particular are increasingly overwhelmed by pressure to eat ‘ethically’ and feel judged”.

I inhabit a number of fair food venues online and, like Rachel suggests, I sometimes find a sense of moral virtue and superiority around food choices being:

Rachel suggests this is elitist because, presumably, it excludes foods — and the people who eat them — that lack those characteristics. Thus, the good food or fair food movement can be inadvertently exclusive.

The virtue of DIY food production

On the affordability of good food and having time to prepare it, Rachel reports respondents to her research ” …ask how they possibly can do the ‘right’ thing on a restricted budget and in extremely limited time: not everyone can grow vegetables and fruit or raise their own chooks, only shop at expensive farmers’ markets, or go to many outlets in order to buy only ‘ethical’ products”.

…Those with the time and space have created something of a subculture around urban homesteading with its domestic food gardening, keeping chooks, rainwater harvesting, solar energy production and food preserving… though their primary value is individual and household rather than social…

She reiterates points that I have come across in my work in food advocacy. One of these is that despite the continuing interest in people growing their own fruit and vegetables and in keeping chooks, not everyone is able to do this. Yet, on social media I find statements like ‘everyone should grow their own food’ and similar unrealistic comments that seem to position those with the resources to do this as somehow more virtuous.

Those with the time and space have created something of a subculture around urban homesteading with its domestic food gardening, keeping chooks, rainwater harvesting, solar energy production and food preserving. You can now do workshops and courses in these things. They are all good, of course, though their primary value is individual and household rather than social. The interest in these things has revived the practice of home economics — household management — with people like Sue Dennett, the partner of permaculture design system co-inventor, David Holmgren, being recognised as a leading exponent.

But the opportunity to do these things, as Rachel suggests, is limited to those with a suburban house with sufficient land and time to engage in it. With more and more Australians living in apartments in denser urban areas and with the smaller size of many of those apartments the opportunity to engage in urban homesteading and domestic food production is limited. Statements positioning home food production as more virtuous ignore the reality that a growing number have neither the land nor the time to practice garden agriculture.

On reading Rachel’s article I found I couldn’t really agree with her allegation of farmers’ markets being expensive. I have bought from farmers’ markets in Brisbane, Byron Bay, Sydney and Tasmania, and although I have not made a deliberate comparison, it is my observation that they are no, or sometimes only a little more expensive than supermarkets and other retailers of Australian produce. Farmers’ market food is fresher and buying from them supports the regional economy around food production. I’m talking about fruit, vegetables, bread and the like here, not gourmet foods.

Her source’s comment about the challenge of buying good food on a limited budget, especially if your choice is organic foods, gets at food affordability at a time of economic disruption, employment and income uncertainty and the growth in casual and part-time work that limit incomes. These realities limit expenditure on food, which because it is not a fixed cost of living as are utility bills and rent or mortgage, is seen as an area to reduce expenditure. If these working life conditions continue to grow, it will be interesting to see how they affect food choices.

The source’s comment about visiting several retailers to buy good food is also true. Near where I live, for example, if you want to support smaller food retailers rather than Australia’s supermarket duopoly there is a Harris Farm store. But if you want to buy organic milk then you have to visit Woolworths as Harris Farm doesn’t sell it. It you want any other specialist organic products you have to walk to the small streetfront organic retailer. All that back and forth is a bit of a disincentive to shoppers laden with their purchases. Food from a Tasmanian farmers’ market — morally superior of just good and lcoal?

“As another said: ‘It gets to the point where it’s just too hard, you just buy it, and you turn into a creature of habit … I just can’t find myself analysing all this stuff… you give up, it’s just too much information’.”

The comments reflect the information overload and conflicting information around food and how it leaves people confused. You encounter this on social media especially, with claim and counterclaim about particular foods and health, some the work of those with commercial interests in foods, others the work of people themselves confused, some suggesting the virtue of buying Australian or buying local to support Australian farmers, some promoting organic or vegan. No wonder people are confused and just buy what they feel like buying irrespective of all these claims.

The promotion of ‘superfoods’ is an example of creating confusion. Claims about superfoods are a marketing gimmick. There are no superfoods. Some foods might have more nutritional value than others but that does not lend them some esoteric quality to qualify them as superfoods. It is just another term that confuses people.

The subtle influence of language

On what to do, Rachael says: “Let’s eliminate judgemental language from our conversations about food policy, but most importantly, let’s stop bringing it to the kitchen table.”

She says nothing about what language we would replace it with. Technical language — terms like ‘nutritious food’ or ‘nutrient-dense food’ are no use because they are as exclusionary as those terms Rachel highlights — they therefore suffer from a similar elitism Rachel alleges judgemental language like  ‘good food’ brings.

Jeanette’s selective use of language comes from the real world of advocacy work and is the more credible for that. It is about using terms that trigger an emotional response because emotion is our primary mode of reaction to something. It deals with perception rather than fact, and perception is what leads to the formation of opinion and belief. Politicians and advertisers know this. A publisher I worked for, who was once an editor at a major newspaper, said: “Perception, not facts, is what matters”. He was saying that it is perception that creates personal understanding rather than fact. Fact might modify perception later but people often fail to go beyond initial perceptions.

If Rachel is right, then her assertion that the ‘judgemental language’ that she says signifies social class, educational achievement and a sense of virtue, is something for fair food advocates to look out for. In linking language to social class and education she makes sense because the main agent of social change, and of new food choices, is Australia’s middle class. This is the class with the education and disposable income to spend on foods that match their moral motivation. The choices of low income people are governed by their limited spending power and even if they want better foods they might not be able to afford them.

Rachel’s article is of value to the fair food movement because it questions some of what it does and says. It links good food choices to education, social class and spending power and shows that food is more than a moral choice, it is as governed by economic issues as much as anything else in society. The article also shows how food choices and claims about them can inadvertently position those making them as morally superior and more virtuous. Doing this, though, seems a good way to create social divisions and set up a two-tier food system based just as much on income and wealth as on health and nutrition.

NOTE: My support for fair food is based on improved economic and opportunity benefit to farmers, food processors (canning, baking, bottling, preserving etc) and affordability and high nutritional value for eaters, and on the development of viable regional economies based on regional foods.

The milk wars — it’s not only farmers who are hurting
http://pacific-edge.info/2016/06/the-milk-wars-its-not-only-farmers-who-are-hurting/

Are we looking in the right place to build markets in fair food?
http://pacific-edge.info/2015/11/the-community-food-movement-are-we-looking-in-the-right-place-to-build-markets-in-fair-food/

Save your own, says Jane
http://pacific-edge.info/2015/10/the-commuity-food-movement-save-your-own-says-jane/

TAI findings interesting though with just a little disconnect from experience
http://pacific-edge.info/2015/09/the-community-food-movement-tai-findings-interesting-though-just-a-little-disconnect-from-experience/

The birth of AFSA
http://pacific-edge.info/2015/09/the-community-food-movement-the-birth-of-afsa/

The coming of the advocates
http://pacific-edge.info/2015/09/the-community-food-movement-the-coming-of-the-advocates/

What is the food system?
http://pacific-edge.info/2015/08/the-community-food-movement-what-is-the-food-system/