An end to predictable trail breakfasts 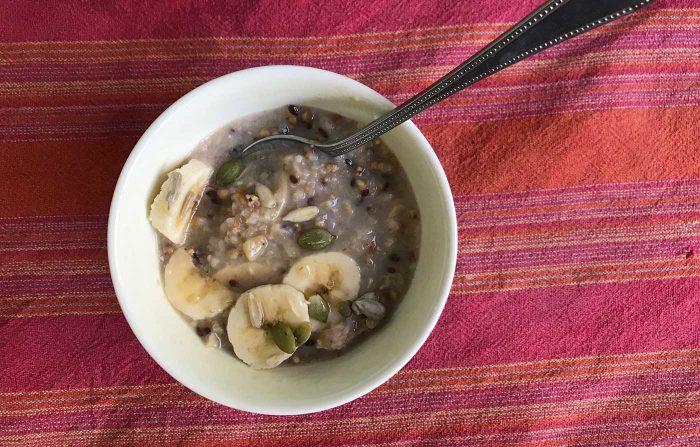 Now, there is something to break that predictabiity.

Meusli is my favourite trail breakfast for overnight walks into the mountains or when travelling and camping by car. You simply pour it into your bowl and add a little fruit juice, milk powder or one of those grain milks and eat. Simple. No fuss. Little washing up to do. It’s quick. I also prefer it no matter the season because I like to make an early start and usually avoid cooking of mornings, hot water for tea or coffee excepted.

Some, though, like something hot. They might add a little water to their muesli and heat it on those really cold mountain mornings when you look out the window of the hut to see a light coating of snow on the ground. On frosty winter mornings, oats with sultanas, pepitos, chopped dried fruit and a few other seeds tossed into the billy is just fine.

Now there’s something else and my partner, Fi, cooked some up this morning because the package was coming up to its use-by date. Better use it, she advised.

It was something called Organic Creamy Banana Breakfast Grains, one of several packages of dried foods that arrived some months ago in a cardboard box, samples from Patagonia, the adventure equipment and adventure clothing business started by one-time dirtbag, big wall climber, fly fisherman and surfer, Yvon Chouinard. 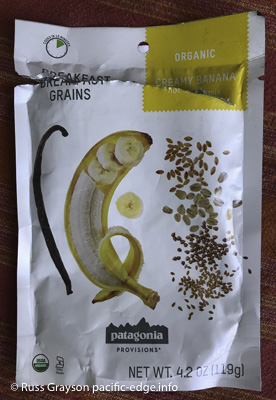 I turned the package over to look for the usual list of ingredients with unpronouncable, unmemorsable, numeric and sometimes suspicious sounding names. All I found was toasted buskwheat, cracked barley, rolled oats, freeze dried banana, nonfat dried milk, flax seeds, vanilla powder, ground rice hulls, sunflower oil (all of these organic) plus salt. I could pronounce them all and I could also recognise them as food. No sweeting is added, the package suggests adding your own preferred sweatener. Fi added maple syrup. She also added other grains such as pepito, and sliced a fresh banana into the bowls.

Cooking took a minute at the boil followed by a nine minute maturing. Taste? Wholesome, if that qualifies as a taste.

So, would I carry this stuff on an overnight bushwalk or longer? As a change from my usual muesli breakfast I would. It is lightweight and the package, which makes enough for two moderate eaters but maybe not for two gluttons, is adequate. I would also use it as an evening meal with other ingredients like seeds thrown in — dining preferences in the mountains are quite different than those in the city.

Bushwalkers usually buy a bag of muesli and divide it into ziplock bags, one per breakfast. Same with rolled oats. That’s still cheaper than the Patagonia product eaten every morning, but what that has going for it is the convenience of a brekky for two in a single bag, easily prepared, and a tasty and nutitious mix. It is a way of disrupting that breakfast predictabiity.

The product bears the organic certification logo of the USDA and is made by Patagonia Provisions.