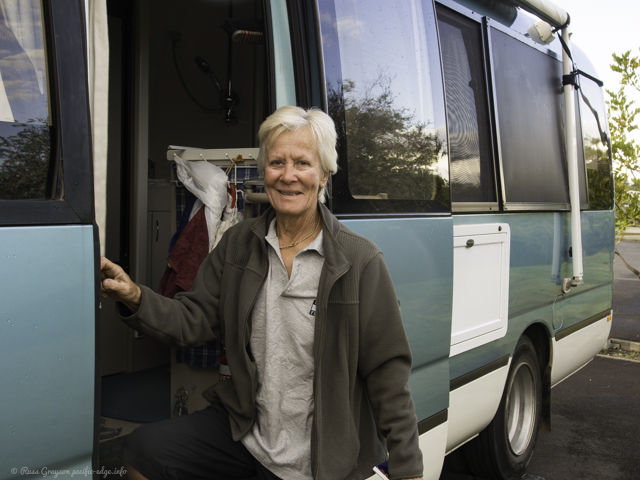 Photo: Anne and her Coaster van.

FOR ANNE and her husband it’s a life spread between beachside Coogee and the open road. Having just returned after a 19,000km journey, the travelling retirees are about to set out again. This time they’re Victoria-bound.

The morning I met Anne she was sorting stuff in her van. Over the months I noticed that her van came and went. It was there, in the same place, for a few months. Then next time I walked past it was gone. I wondered whose van it was. There didn’t appear to be anyone living in it and a sign in the front window said that it was not an abandoned vehicle.

Now I learned whose it is and as I got into a brief conversation with her that sunny, warm morning. I assumed she was perhaps in her late sixties, although I knew better than to ask. Softly but firmly spoken, she came across as a friendly woman, trim and fit looking, her grey hair cut short, her manner relaxed, her face tanned by days in the sun.

Her home on the road was the sage green Toyota Coaster she was sorting stuff in, a converted mini-bus big enough to live in. It includes the luxury of electric light, a small refrigerator and gas cooking. Power for the lighting and other electrical needs comes from photovoltaic panels fastened to a roof rack that feed current into two deep cycle batteries. There’s an awning that rolls out above the side door to provide welcome shade from hot summer sun and shelter from the rain.

“We see a lot of people living in their vans on the road”, Anne said when I asked her whether the van was their fulltime home. “But for us it’s not. We have an apartment in Coogee”.

And accommodation on the road? “We like to bush camp”, said Anne. “Sometimes we stay in caravan parks, but we like the bush camp best”.

I asked about the sign in the window. “We park the van here where there is space for parking. It would take up too much space close to where we live. We put the notice in the window after someone reported it to council as an abandoned vehicle. It explains that it belongs to local Coogee residents”.

Like many, Anne and husband combine a fixed home life with weeks and months on the road.

The right type of vehicle

Anne’s Toyota is similar to the earlier model of the same vehicle that Red Gypsy Lauren and her children drive around the country in. I encountered Lauren when she and her children were staying at a friend’s place in Tasmania. Lauren invited me to peek around inside the van, her family’s fulltime home, and I found it homely despite the space limitations for her and her three young children. Living the mobile life means getting used to living in small spaces. 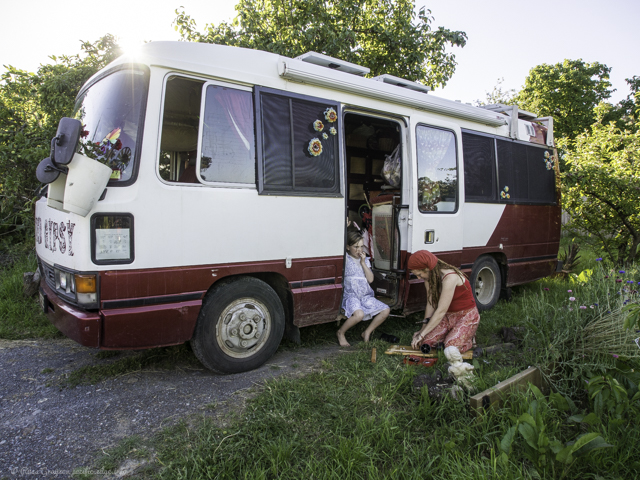 Red Gypsy Lauren and daughter camping among the fruit trees at Tasmanian performance poet, Yvonne Gluyas’s home. The van has taken Lauren far across the Australian mainland and to places distant in Tasmania.

The Toyota Coaster is a popular type of vehicle for living on the road. It is a vehicle I have encountered in different cities over the years, decked out as fulltime or temporary mobile dwelling. One I saw on the Hobart waterfront down by Constitution Dock had canoes and bicycles on the roof rack and hanging off the rear, a family’s adventure vehicle.

New the term might be, older the reality is. ‘Adventure vehicle’ is a term for something that has existed for a long time. It has greatest currency in the USA although it is starting to creep into the Australian adventure lexicon. It describes a vehicle that transports adventure sports practitioners — climbers, bushwalkers, canoeists, skiers and the like — and that, usually parked somewhere in the wild, is used as a base camp for their adventures. 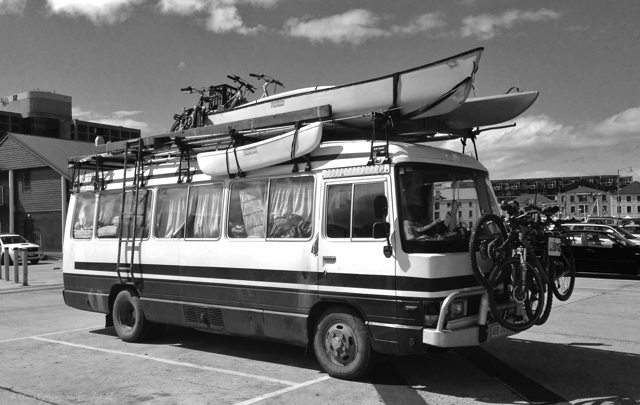 Van as adventure vehicle. A van loaded with canoes and bicycles in Hobart.

As the post-war generation came of age in the sixties the more restless among them, the curious, the seekers of a different way of life forsook the suburban homes of their childhood and discovered nomadism. Enabled by disposable income and cheap oil they popularised an automotive nomadism that would eventually become the vanlife of today.

The VW Kombi became the stereotype vehicle of those nomads. They discovered it could be used for more than transporting people and cargo around the city. The decorated VW hippy Kombi is legend. Now, those old Kombi vans bring very high prices, especially once renovators have finished their work and their new paint job sparkles in its newness. A friend who restores old VW’s told me that although there is a romantic aura around the Kombi of the sixties and seventies, once people drive them and realise how basic they are they sometimes rethink.

There is another artefact of Australian automotive history and nomadic life that seems largely forgotten. It is the panel van, a product of the seventies and usually a Holden or Ford Falcon commercial vehicle intended for urban deliveries. The panel van was adopted as home-on-the-road by surfers travelling the coasts in their never ending search for the best swells. When we occasionally see them as restored vehicles today they remind us of a time that, for those who lived it, seems somehow freer and that was open to so many possibilities. 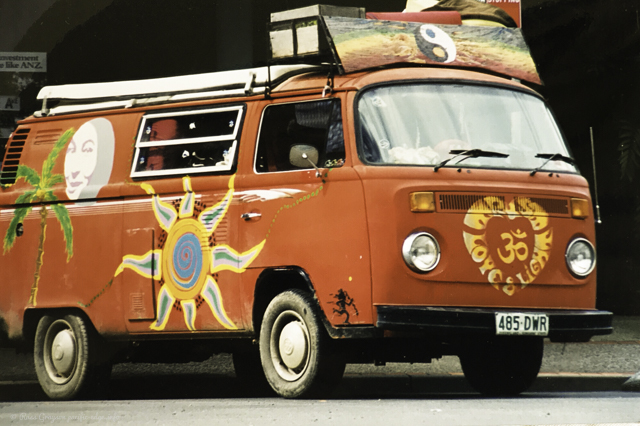 Van as cultural signifier: an artful Kombi decorated with the symbols of hippiedom. Transport and home on the road, there were so many vans like this.

The van is more than a home on the open road. Increasingly in Australia but more so in the US, what seems to be a growing number of people choose to live in their vans because of the high cost of rental accommodation in the big cities. They seek escape from the never-ending stream of rental and utility prices that come with urban life.

Some of these are working people, Some are unemployed or otherwise financially disadvantaged for whom a van forms part of their social safety net. I found it interesting that a comment left on an online story pointed out that in other times those van dwellers would have been classified as homeless people. Homeless, though, is a relative concept. Does a home have to be a fixed address or can a van can be a permanently occupied mobile home?

In both Australia and the US people on limited incomes, including the aged unable to afford high rentals, live in their vehicles whether vans, station wagons or sedans. This is a new face on the old problem of poverty. It illustrates how there are two populations calling their vehicle home, whether for only a limited time or longer: those forced into living in vehicles because of poverty and those doing it voluntarily as a lifestyle choice.

Whatever their motivation, van dwellers are not always welcome. Living in Byron Bay on the NSW North Coast, a popular surfing town now gone expensive, I encountered many a restored VW Kombi or other van the transport of travellers passing through. But Byron Council forbids them overnighting on the streets within the city limits. It was the same in the clifftop parking area at Clovelly Beach in Sydney’s Eastern Suburbs where complaining locals led to Randwick Council banning overnight stays. The problem was that there were no toilet facilities open overnight and sanitation and public health became a real problem. It was the same elsewhere, such as Victoria Street in Potts Point, not far from Sydney’s city centre where backpackers camped in their vans. Again, sanitation was the cause of the council crachdown on van living on Victoria Street

Much of the ill feeling towards overnighters in vans is attributable to backpackers, the budget travellers that move up and down the coast and across the inland in cheap vehicles they trade with one another or buy on the second hand economy market. It  is unfortunate that backpackers, short term visitors to Australia, create difficulties for native van dwellers.

The young woman I spoke with as she shelled vegetable seeds at Addison Road Community Garden in Sydney’s Inner West revealed that she lived in her van. I didn’t ask whether she parked in friends’ driveways or stealth camped on quiet streets. Whatever she did, she seemed happy with her lifestyle. a lifestyle she freely chose.

I have to include my partner here too. Long before we met she lived in her old, white, ex-commercial VW Kombi van in northern NSW, as well as in one of those big car camping tents in Lismore caravan park. In that van I travelled with her until it finally clunked out, only to be replaced by a canary yellow Mitsubishi commercial van, an L300 model if I remember correctly. That was cold accommodation in the depths of winter at the bottom of the mountain where we would go cross country skiing at Falls Creek .

Make your transit of Highway One, take the winding road along Victoria’s southern coastline, drive the mountains of Tasmania and somewhere on those journeys, perhaps in some semi-hidden place by a cold Tasmanian lake or in the bush or hill country, you might encounter those for whom their van is their home.

And, if when on those journeys you see a woman and her husband camping in a sage green Toyota Coaster, maybe, just maybe, that’s Anne on another of those journeys that is her life on the road.

An end to predictable trail breakfasts