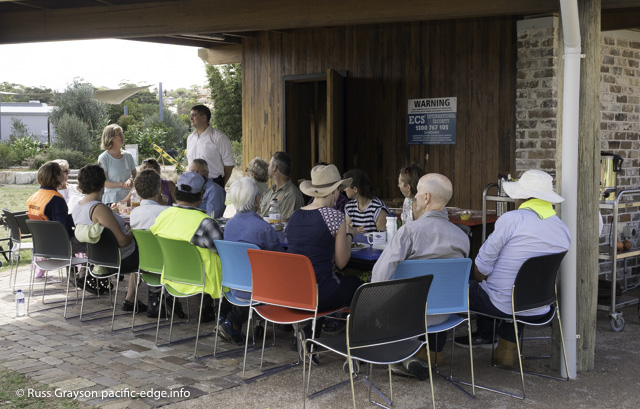 FOLLOWING the previous Saturday’s workshop with Les Robinson, Master Communication for Change, on how to use communications to encourage people to take action, this workshop taught us how to facilitate small groups to come to decisions.

Les is one of Australia’s more experienced educators in social change, his consultancy work taking him into local government, health, landcare and other areas where his problem solving, facilitation and communications services are valued. His book, Changeology, is read by people working in both organisations and community associations.

The facilitation workshop offered participants down-to-earth, proven techniques for working with groups, all drawn from Les’ extensive experience. And like all his workshops this one included plenty of time for practice. In teams, people worked on their own real-world applications.

Participants came from a diversity of organisations. Some worked with community organisations, some in health, one in a school, one a WWOOFer.

The dire need for effective facilitation

If bad meetings and processes are a malady, effective facilitation is a remedy.

For anyone who has sat through unnecessary and boring workplace, or tedious community organisation meetings where people ramble on, where time is wasted and agenda items left undone, which was most of us there, the workshop offered a better way.

Potentially fractious meetings are best facilitated by someone with no involvement in the organisation and no allegiance to either side. This ensures all are heard.

It is especially in community associations that there is a lack of facilitation skill. The result is long, wordy meetings after which people forget to do the things they say they will do, or who do them at the last moment before the next meeting. Boring meetings that follow conventional meeting structure alienate participants who may stop attending. This is a path to ineffectiveness that a well-facilitated meeting with clear actions to follow can fix.

Facilitating small groups to obtain information is also a skill useful for journalists, including citizen journalists, in understanding some incident or event or exploring the work of an organisation. Skilled facilitation’s value to business is already known. Here, it forms part of the toolkit for restructuring organisations from hierarchies to flatter, more effective structures because it brings staff together to elicit ideas.

Les said that facilitators should be involved in the planning of meetings and should make clear to organisers that a diversity of attendees should be recruited to attend. A diversity of participants avoids the ‘like-minds’ problem that can generate groupthink and also gets around an organiser stacking a meeting with people who support them.

Dealing with difficult people was a topic that piqued the interest of all. A participant asked about public meetings that are stacked by NIMBYs who only want to further their agenda and who are often loud, rude and verbally aggressive. In a situation like this, Les suggested putting to the attendees the option of stopping the meeting to discuss what the disruptive people want to talk about. Unless the meeting is mostly of their supporters, attendees will likely vote to continue with the agenda. If they are the majority of attendees and try to coopt the meeting or dominate it, then it is time to close the meeting.

A skill to learn

Participants got an inkling of that in this workshop. Like Les’ workshops in communications and reviving your community group, this one was packed with the wisdom of experience.

Communicating for change: a most useful workshop

The legals: Our duty of care to visitors to permaculture sites