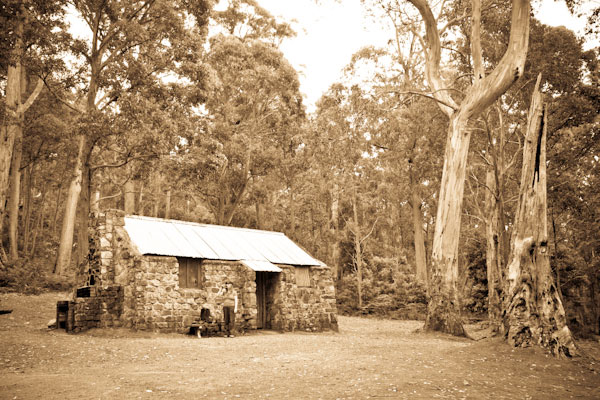 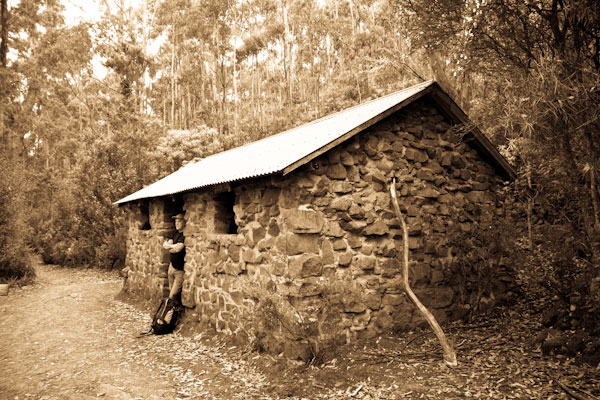 THE HUT WAS LARGER than I remembered. Longer too. And was that metal table there when last I came this way decades ago?

My image of Rock Cabin was of a smaller hut built of the material of its namesake and nestled into the scrub beside the Lenah Valley Track not all that far below the summit road. As is often the case, memory proved to be part-truth, part-misinformation. On the Lenah Valley Track.

The cabin is only 800 or so metres along the trail from The Springs. Look around there and you find old stone footings and bits and pieces indicating that this flatish bump on the south western shoulder on Mt Wellington, not all that far below the treeline, has a long history of use. Earlier last century it was the site of a large timber hotel, however time and bushfire brought an end to that.

The Springs is the starting point of a number of walks on Hobart’s mountain. Leave your car here and walk along to Junction Cabin down in the eucalypt forest. Stroll below the columnar dolerite spires of the Organ Pipes, those high, angled cliffs easily seen from down below in the city. For the energetic, start the ascent to the summit, a great day walk for the most part above the treeline. Rock Cabin… on the trail not far from The Springs.

The summit walk… once, I did it in the good company of others on a day of such clear weather that we could see Federation Peak way off on the distant horizon to the south west. We knew that it took days of hard walking just to approach that peak, and then there was the airy ascent. Once, in those now seemingly distant times, we had made the long trek across the undulating Arthur Plains of button grass cut across by narrow streams whose banks were forested with thickets of  tea tree and stunted eucalyptus. We ascended the Eastern Arthurs to make for Federation but time was against us and we had to turn back.

Rock cabin is a simple stone hut. It’s a place to shelter from the inclement weather that can sweep across the mountain but is not an inviting place to overnight—there’s only a steel table, a bench, a fireplace. A limited amount of light flows in through the two small windows and the door is always open because, well… there is none. My recollections of the cabin are of being in a party of walkers stopping off here after a walk up one of the tracks from South Hobart, just one of the many time I stopped by.

The Lenah Valley Track is an easy, well made path through the forest. It’s one of the mountains’ old tracks and has seen the passage of generations of bushalkers. On this January walk we encountered tea tree and a bush with small red berries.

After Rock Cabin, the track becomes a little rougher in places but is far from what you would call a rough track. At one place it crosses a scree slope where at some distant time large rocks have cascaded down, pushing away trees to leave an opening offering good views over Hobart far below. Here we stop to take it in and realize the good fortune these townsfolk have in the presence of this mountain within the city limits.

Moving on, it’s an easy trek to the clearing around Junction Cabin. It’s well named, for here a number of trails that cross and ascent the mountain converge, including one designated for mountain biking. We watch as a lone woman cycles through the clearing.

This is a walk full of remenisence for me, for many years ago I would come by Junction Cabin on forays onto the mountain, just as I had with Rock Cabin. Then, the hut was a rough construction of roofing metal. Now that has gone and in its place stands a more fitting stone hut. Inside, its appointments are minimal and reflect those of Rock Cabin and even the rainwater tank is enclosed in a circular stone structure. Junction Cabin stands amid a clearing in the forest where several tracks converge. In visiting these huts it’s important to know that they have a cultural and historic significance to mountain walkers just as the hut of the mainland’s Kosciusko National Park have for those who follow its extensive trails.

Huts are destination and shelter, icon and history, especially on Mt Wellington. Hut building on the mountain can be traced back to the second decade of the Twentieth Century when groups of Hobart townsfolk constructed weekend getaways using local materials from the forest. These were not just basic huts, they were sometimes two storey, elaborate structures.  All we have is a handful of old photos to remember them by and, for those who know where to look, the odd stone footings. Time and bushfire has removed all other traces. Lone Cabin is a small shack of stone and roofing iron in a clearing in the forest just downslope of Junction Cabin.

I first became aware of the mountain’s hut history in the 1970s through  the pages of the The Tasmanian Tramp, the annual publication of the Hobart Walking Club at that time. More recently, the increasing interest in the history of the huts and in Mt Wellington in general has been stimulated by books such as John and Maria Grist’s The Romance of Mount Wellington (2011, The Franklin Press, Hobart).

Walks on the mountain with people with a knowledge of the old huts and where they were located led me to hidden footings, and coming across a newer hut out on the summit plateau in the late 1970s while on a weekend traverse of the Wellington Range further stimulated my interest.

Lone Cabin is a simple stone hut not far from Junction Cabin and is reached by a short signposted diversion off the Lenah Valley Track. I don’t know the history of this hut but, even though it has a fireplace and stone chimney, it is reminiscent of a day shelter as the southern wall rises only three quarters its height.

It’s situated at the end of a level clearing and has a secluded, enclosed feel because of this.

Three huts along a mountain trail. The Lenah Valley Track is an easy one and, if you can find the motivation, you can press on from Junction Cabin and take one of the numerous trails up or down.

For me, this was more than a walk to revisit old mountain huts. It was a journey into memory as much as it was a journey along a bush track. I had been this way before in the company of people with whom I long ago lost contact. Where are they now? Do they still walk on the mountain, past these stone huts as they once did?

I have come this way again after a gap of decades and in that time some of those huts have been remade. Now, just as they have persevered through the decades, so they are set to do so into the new century.