Figure in a window 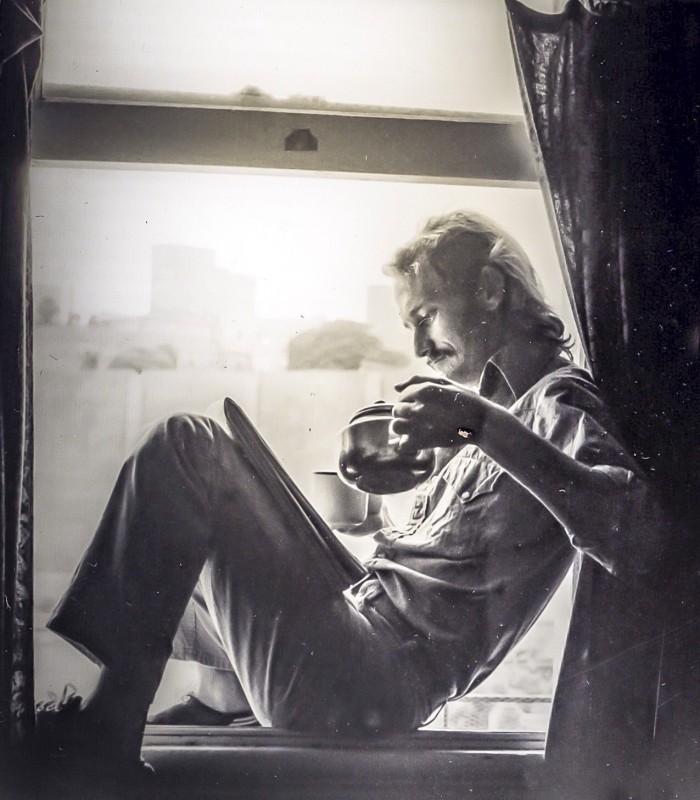 ” …WHITLAM’s  in power and the war’s ended… for us, anyway, the yanks are still there, still involved in that peace process that seems to go on and on just like the fighting… and here we are in Annandale…”.

“Different living here, different to the Woolloomooloo sharehouse…” she replies to the figure wedged into the window sill. “Wonder what happened to that pregnant girl… the one who stayed only a short time… after her father kicked her out of home… and him a priest, too”.

“Yeah, unreal. She just sort of came and stayed only a few months then went… but where? I asked May a few weeks ago but May’s heard nothing of her since she left”.

The figure in the window reaches over, picks up the dull and dented aluminium tea pot from the table and tops up his cup. Replacing it, he takes a sip and looks over at the slim, blonde woman in the purple Tshirt sitting on the edge of the bed. He recalls without thinking that she joined the Woolloomooloo sharehouse sometime after he did and he wonders how a nice, North Shore girl from a nice, upper North Shore family came to find her way to such a downbeat part of the city.

Then he says in that tone of voice that indicates something important suddenly remembered… “Hey… Meg said she’s going to that festival in northern NSW next year… Aquarius Festival, isn’t it? In March. You going?”.

“Don’t know. Depends if I’m working down the road at Kodak.”

“If Meg goes then it’ll sort of happen… definitely will happen… that Brian will go too… and probably Rog… oh, yeah, whenever I think of Rog I think of Tina and how she disappeared in Nepal…”, he leaves the rest unsaid, hanging, though they both know that what is unsaid has no answer.

“You know”, the woman says as she stands up and moves closer to the figure in the window. “It would be really good to get out of this city, don’t you think? Do you want to go somewhere? Like Sally and Yvette did… they went to Tasmania picking apples a couple years ago… “.

“And Sally came back with more than a bag of apples”, the figure in the window cuts in.

“Well, accidents happen, don’t they”, responded the woman. “But… don’t you think it would be good to go? Go somewhere? Out of this city?”.

“Hmmm… “, the only response from the figure in the window, a response ambiguous yet a response not without promise, not without potential. In their short time together she had learned to interpret his ‘Hmmm…’ as signifying that he would think something over, that the response might be days, even weeks away, but that at some time he would respond.

The figure in the window looks away, turning his head to gaze into the distance… over the roofs of the terrace houses across Taylor Street… over towards where Parramatta Road, hidden out of sight behind buildings, runs along the ridge, runs westward towards the mountains, towards other places. She looks at him and notices that it’s as if he’s considering some new idea, as if he’s mulling something over in his head. She hopes it’s her idea… her idea of escape to a new city, a new place.

And that, in that little bedroom in the lower flat of an old terrace house on an unremarkable Annandale street, is how the desultory conversation went between the young blonde woman and the figure in the window, that warm, lazy Saturday afternoon in the late summer of 1972.

The citizen photojournalist: here’s the manual

Learning to create our new nature in the city…