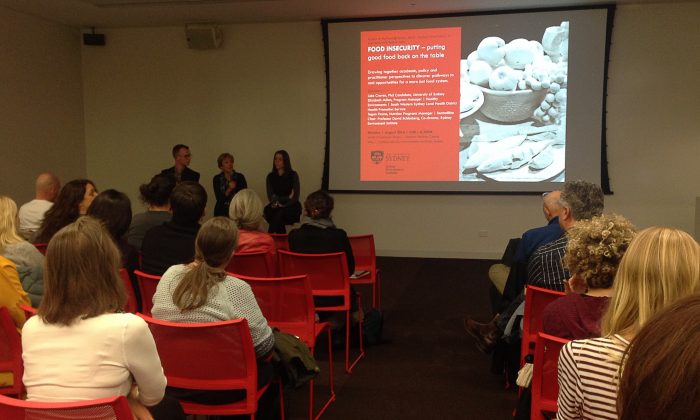 “Food is politics at its most raw”… Hilary Benn.

LUKE CRAVEN summarised it well when he told the audience that, when he started researching food policy five of so years ago, there was no way a meeting room of this size could be filled.

And near-filled it was for the Food Insecurity: Putting Good Food Back on theTable seminar that cool winter night at Sydney University. I put at a conservative 90 or so the number attending. Another participant, local government sustainability educator, Fiona Campbell, put it at more than 110.

The seminar was another in the Food@Sydney series organised by the university’s Sydney Environment Institute. Like those others, it was something that required further follow-up over a meal and wine at the nearby Forest Lodge hotel.

Presenters from the food front

A panel of three speakers took the audience through the reasons for the city’s persistent problems in ensuring all people have sufficient food to give them the nutritional health they need to be functioning members of society:

But those problems I mention… what are they and why do they exist? Why do some people experience difficulty in securing a reliable supply of food for their families?

The reasons are more diverse that those sometimes offered by people who have never missed a meal and who do not have to worry about where next week’s food is to come from.

On the frontline of Sydney’s hidden hunger

Liz Millen is a slim, middle aged woman who emanates a sense of firmness and authority when she speaks. She comes across as someone who knows very well what she is talking about. Liz is well-versed in food issues through her work and through involvement in food advocacy, being one of the founding members of the Sydney Food Fairness Alliance.

Working on the frontline of Sydney’s hidden hunger, she says there are many reasons people lack a secure food supply. Low incomes and poor public transport linking people to food retailers make nutritious — let’s call it ‘good’ food — hard to find in south-west Sydney. There is plenty of fast food available but it is low quality, fatty, sugary. According to Luke Craven, this makes unhealthy food an easy choice.

Who are these food insecure people? The speakers agreed that they are people on low incomes, pensioners, refugees, single parents, disabled people, the homeless.

Unlike household utility costs like electricity, gas and water that vary more on a seasonal basis, and unlike rent and mortgage payments that change less frequently, food is a variable expense where savings can be made…

Unlike household utility costs like electricity, gas and water that vary more on a seasonal basis, and unlike rent and mortgage payments that change less frequently, food is a variable expense where savings can be made. Thus, the appeal of supermarkets promoting low prices and specials. Supermarkets might be the only food retailer in an area, something suggested by Liz when she mentioned the closure of small food retailers, itself often the result of price competition by supermarkets.

Unlike the US, a lack of research on food insecurity contributes to variable estimates as to its extent. The variations might mean something to statisticians and other head counters but to me they are close enough to each other to highlight the significance of the problem.

Liz cited a figure around one million but Tegan quoted around 1.2 million the number of Australians who experience food insecurity in a year. To put it another way, that’s four to five percent of the population.

Tegan, a young woman with long, dark hair who would not appear out of place in some job that dealt in some less-serious business, quoted figures from Foodbank, a not-for-profit that describes itself as ” …a pantry to the charities and community groups who feed the hungry… a conduit between the food industry’s surplus food and the welfare sector’s need”.

In other words, like OzHarvest in Sydney, Foodbank is a food rescue agency taking still-edible food otherwise destined for landfill and distributing it to organisations feeding people. It claims to have salvaged enough food for over 40 million meals.

But those facts and figures Tegan quoted?

First, there has been an increasing demand for food relief among the working poor — people in employment whose wages do not cover sufficiently the cost of living. Let me speculate here that they include many of those in part-time employment and those experiencing first-hand the casualisation of the workforce.

Here’s some other research by Foodbank:

Tegan quoted from Monash University research reporting that Centrelink clients in Victoria spend 32 percent of their benefit on food. They also have to meet the cost of rent, utilities, transport, clothing and other life needs. This at a time when there has been a 12 percent increase in the cost of ‘good’ food while there has been a fall of three percent for non-essential foods like sugar.

A mix of causes

Like those who experience an insecure household food supply, the causes are varied.

Liz explained that medical expenses, job loss and eviction are causes of short term food insecurity. Long term, the causes are economic and political. The way that government at different levels is structured in departmental silos that seldom communicate reduces government effectiveness in addressing food insecurity because it can fall through the gaps between the silos.

“What we measure matters”, said Luke…

According to Luke, the failure of the federal government to monitor and measure food security and associated issues is another cause because it contributes to the lack of data on the issue.

“What we measure matters”, said Luke in reference to the need for accurate information on which to base action.

In a clear lack of political leadership with no politician prepared to take on food security as a personal focus and the lack of funding to research the community food sector were additional reasons why it has been so hard to address food insecurity and its associated problems.

…the cost of food insecurity and the resultant health impacts is high. In Tasmania, for example, the cost is around $70m a year from the state health budget…

And those associated problems? Speakers agreed that poor diet leads to behavioural problems in children, to lethargy that affects people’s capacity to find employment and to poor performance because of reduced learning capacity. Then there are the children who go to school without breakfast. Luke said that the cost of food insecurity and the resultant health impacts is high. In Tasmania, for example, the cost is around $70m a year from the state health budget.

‘Psychosocial’ was a term used in the seminar. The ‘social’ part of the word includes those things causing food insecurity I mention above. The ‘psycho’ part refers not only to how people think about themselves and their situation, but to something else too — the experience of stigma, a sense of shame for being food insecure and the reluctance to admit to poverty and food insecurity.

So, what’s the solution?

I think it largely unknown within the community food system the innovation that has been going on for some time among food-related agencies. Community kitchens, community gardens, community pantries are innovative enterprises Liz is familiar through the involvement of her agency.

Some years ago in Perth I was taken on a visit to one of these community pantries that accept food from donors that they resell to low income people at low prices. This means that buyers get more food for their dollar than they get from the supermarket. It was well patronised and had a little community garden adjacent.

Community gardens, land where people grow some of what they eat, won’t solve food our issues, says Liz, but they offer social connection. They also offer a potential for livelihood initiatives such as the catering enterprises she mentioned that have come from them, as well as training of value in the workplace, such as the that in food handling required in some areas of work.

For Luke, storytelling is important to humanise food insecurity, to bring it down to the personal level of lived experience…

Liz mentioned that a commonly-cited solution to food security, cooking classes, can be perceived as paternalistic. She mentioned a less formal approach she is familiar with at a south-western Sydney community kitchen where a group of African men are acquiring cooking skills.

For Luke, storytelling is important to humanise food insecurity, to bring it down to the personal level of lived experience. He says personal stories can clarify the complexity of everyday life and show how how there are different experience of food insecurity.

A better informed population putting pressure on government to perform better in regard to food security and health, and a lack of nutrition training for medical practitioners were other suggestions for improvement that might be addressed. Was health policy less nutrition focused and more focused on the social determinants food insecurity we might make progress.

Behavioural change is difficult, said Tegan, but thinking about how we discuss food insecurity is useful, said Liz. We could think about language and use catchy terms like food journalist and author Michael Pollan’s “foodlike substances” for describing additive-laden, low nutritional value foods. This relates to proposals from other food advocate communicators who propose using more emotive and less-technical language because emotion is how people first react to something.

Secondbite offers train-the-trainer education for people working with NGOs and organisations working in the food insecurity space, and for the public.

Politics at its most raw

“Food is politics at its most raw”, said Hillary Benn, British Secretary for State for Environment.

She got that right. There is no escaping the close links between food and politics. It is politicians and their public servants and outside advisers who determine food and agricultural policy, or who are responsible for its lack. They determine the benefits paid to pensioners, to those who cannot work or who are temporarily out of work. Those benefits make available the money to buy food after fixed cost of living expenses like rent, utilities, travel and the others are accommodated. Politicians make decisions on whether the small market gardens, orchards and poultry farms on the urban fringe continue to feed the cities or are consumed by urban creep. It is politicians who determine the health of our people.

These are some of the take-aways from the Sydney Environment Institute’s Food@Sydney seminar. It was one of a series of which more are planned. In bringing together researchers like Luke with practitioners on the food insecurity frontline like Liz and Tegan, the audience had access to knowledge and expertise of people out there doing this necessary work of building food security into the nation’s political, scientific and cultural life.

The new economy reborn in Sydney