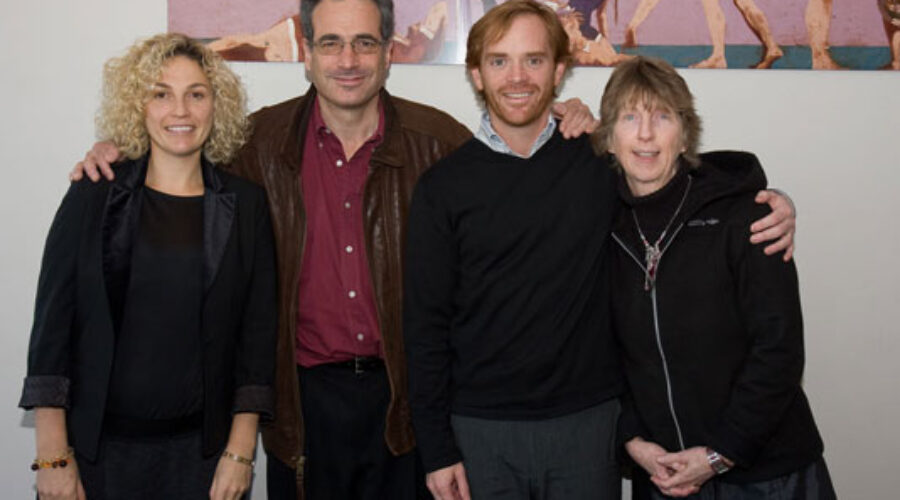 FOR MICHAEL SHUMAN, his visit to Australia was a whirlwind of appearances and presentations that started in Brisbane, took him into Northern NSW, then up to Coffs Harbour and Bellingen, down south to Hobart then north to Sydney.

Michael works with the Business Alliance for Local Living Economies in the USA. He was the second local economics advocate to visit Australia from that country whose visit had been organised by Ken McLeod, now with the Wollumbin Institute, a regional, sustainability-focused organisation active in Northern NSW. Judy Wicks had been the first. Proprietor of the Black Dog Cafe in Philadelphia and local economics maven, she attended Brisbane’s Go Local conference a year ago and made an appearance in Sydney, bringing news of practical examples that showed how economies could be local, efficient and viable rather than big, anonymous and footloose.

A man perhaps in his early fifties who lives in Washington DC, Michael is an economist, attorney and advocate who brings passion to his presentations. He believes that locally owned business has a key role in making regions more resilient to the impacts of fluctuations in global markets and to other disruptive events affecting them from outside. Trading in locally produced and consumed goods and services extracts more value per dollar for local communities, and this strengthens regional economies. It was this that attracted economic development people and others from the Transitions movement to Michael’s appearances in Brisbane and Sydney.

The economics of sustainability

Economics is one element of sustainability, a set of practices that also includes in its ambit the natural, rural and built environments and that is captured in the sustainability troika of business, governance and civil society. It is this tripartite structure, made up of society’s major segments, that is the necessary combination that moves us forwards along the transition to sustainability. It is also what separates sustainability education and practice from environmentalism, which usually takes a narrower focus on natural environments. A few established environmental organisations, now, are starting to broaden their ambit to include the urban and social environments.

Michael Shuman’s ideas add an economic dimension to the conversation around sustainability, one illustrated by the numerous examples he provided in his talks and one largely missing from the conversation.

Appearing in Sydney at the end of his Australian speaking tour, Michael’s was an intensive end to a successful series of appearances. News of his impact on audiences had preceded his arrival in the city and had been carried through the digital channels of online networks. For those oganisations that had a role in planning and managing his speaking engagements, especially those in Sydney, the reward was in reaching people usually outside of their ambit, extending the knowledge of their presence and agenda and opening them to new people and, perhaps, new alliances.

First up for Michael was a meeting and conversation with Sydney sustainability educators. Organised by Fiona Campbell, Sustainability Education Officer with Randwick City Council and held at Randwick Community Centre, the meeting attracted a sizable group of local government sustainability and environmental educators including those from North Sydney, Pittwater, Manly, Leichhardt, Bankstown, Hornsby, Willoughby and Rockdale councils; a researcher from UNSW; economic development people from the Macarthur Business Enterprise Centre, Fairfield and Kuringai; an educator from the Australian Museum; an Urban Sustainability Support Officer (who supports councils in their sustainability work); an Eastern Suburbs community-based educator; and a woman from a community-based Transition Initiative/education group in Katoomba.

The theme of Michael’s presentation was ‘bringing economics into sustainability education’. For some there, this was a new idea, economics not having been a part of their educational agenda.

A little over an hour later, and Michael was at the Fair Trade Cafe in inner urban Glebe for a TransitionSydney Cafe Conversation. The entire back room of the Cafe had been booked out, however these still wasn’t enough space for all who wanted to come. A waiting list had been started.

This was in the informal, conversational style tradition of TransitionSydney’s Cafe Conversations, such as that convened previously for Robert Pekin of Brisbane’s Food Connect, a successful CSA-type local food system. The event was noteworthy in that it demonstrated the capacity of TransitionSydney to reach out and attract participants from outside its membership and from outside the permaculture milieu that forms a substantial chunk of transition groups in Australia. It also demonstrated the effectiveness of the less-formal conversation format that encourages attendees to participate in conversation rather than sit quietly as passive recipients of a presentation. Oh… no Powerpoint either… just an informal discussion.

Attendees included what might be termed ‘mainstream’ people such as those from the corporate world, local government, universities, an agricultural biodiversity group, food writer John Newcombe and another journalist whose name tag merely identified her as ‘De’, the organiser for the Organic Traders and Consumers Network — an influential organic food industry body in Sydney — an event organiser and others including the team from the new TransitionMarrickville group. They came from inner Sydney, the northside, Eastern Suburbs and as far away as the Central Coast. Asked how they found out about the event, their answers disclosed the effectiveness of promotion through the various email networks.

Thursday was a full one that started early with a business breakfast at Bondi Bathers Surf Lifesaving Club at Bondi Beach, organised by the joint Woolahra/Waverley/Randwick council eco-footprint program that seeks a reduction in the bioregion’s environmental and resource-consumption impact, and that is led by Randwick City Council’s Richard Wilson.

Outside was a clear, glorious Eastern Suburbs winter morning where, seen through the Surf Club’s tall, arched windows, a vividly blue Pacific cascaded as lines of foaming swells onto the broad, yellow sandy swathe of Bondi Beach. Inside, Michael addressed a mixed group of Eastern Suburbs small business people, the City of Sydney’s economic development officer and another from the Darlinghurst area, local government staff, an ALP councillor and Damien Lynch, the originator of the social (ethical) investment industry in Australia who started the country’s first social investment opportunity, August Investments, in 1981.

Hungry for Change, a public forum

Early afternoon took Michael to the formal sandstone grandeur of Sydney Customs House at Circular Quay that the City of Sydney had made available to the Sydney Food Fairness Alliance (SFFA). The Alliance is the organiser of Hungry For Change, a public forum that was designed as a lead-up to the October Food Summit that will see the start of developing a food policy for NSW.

SFFA is a coalition of health and nutrition workers, sustainability educators, local government staff, representatives of a social justice institute and the church, the Organic Traders and Consumers Network, people involved in community food systems — including the Australian City Farms & Community Gardens Network and the Organic Hunter/Sydney/Illawarra food system — farmers from Sydney’s periurban agricultural region, the Red Cross, university researchers and a representative of the permaculture design system and TransitionSydney.

The forum was offered as an afternoon event that was repeated in the evening for those who worked during the day. The afternoon session was fully subscribed and drew the greater number of people. Even then, there was a waiting list of those wanting to attend.

Michael linked his proposals for economic reform with research, funded by the Kellogg and Gates foundations, that he has been conducting into local food systems in the US. Following his presentation and a break for coffee and nibbles, a process based on the World Cafe model made it possible for participants to develop ideas to be taken on to the October Food Summit. Themes were set up on different tables and participants moved from table to table to generate ideas.

This approach structured the event as a participatory one that harvested audience input, giving participants a voice in the Food Summit. Once again, participants represented a broad swathe of society that demonstrated the capacity of SFFA to communicate with and appeal to a diverse milieu. The event was organised by a team that included people from the SFFA, Woolahra, Waverley, City of Sydney and Randwick councils and TransionSydney. City of Sydney had generously made a grant available for Hungry For Change, as well as the excellent Customs House venue.

It was a weary Michael Shuman who was dropped off at Sydney airport’s international terminal on Friday morning for his 14 hour fight home to Washington DC.

The success of Michael’s appearances made clear the value of organisations forming partnerships to share resources and expertise for a common endeavour.

For the SFFA as well as TranstionSydney, his visit opened new intellectual territory and gave them access to people who are not usually associated with those groups. For those in other states, his talks were stimulating, so much so that, after Michael’s inspirational Brisbane appearances, a businessperson put $5000 on the table to start a local, small business organisational initiative. Within two days that sum had grown to $36,500. Now, that’s enthusiasm… that’s acting on inspiration.

Michael as brought to Australia by the Wollumbin Institute.

His Melbourne tour was managed by Amadis and Gilbert Lacheta, the stylish and more-than-capable team at the Village Well consultancy.

Support for Michael’ appearances was facilitated through the generosity of City of Sydney in the form of a grant, the competent services of the city’s communications department and the City’s making available the Customs House at Circular Quay for the SFFA’s Hungry For Change event.