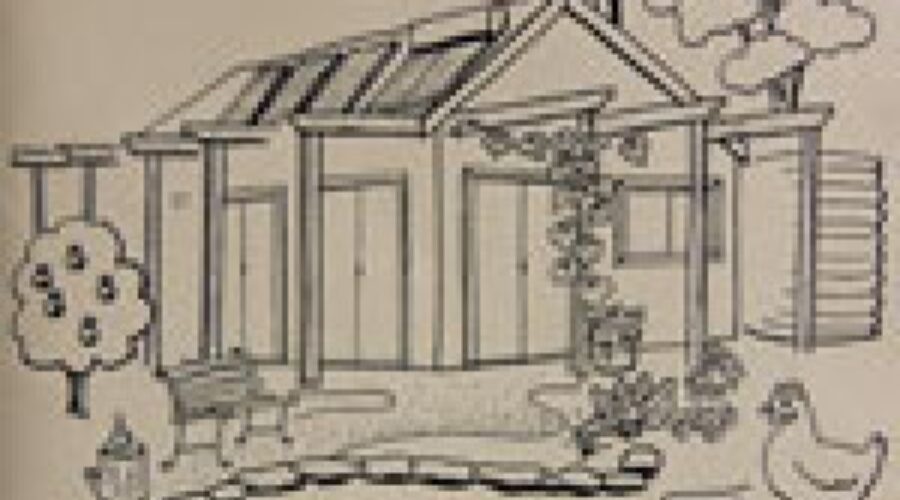 IF I HAD TO MAKE A KNOWLEDGABLE GUESS, I’d say that her courage to live her spiritual beliefs have led Rosemary Morrow along the path of a comfortable frugality and simplicity of living. If I wanted confirmation of this, then her little, 23 page, A5 size booklet would provide it.

The booklet carries the rather intriguing title of A Good Home Forever. It proposes that we respond to economic downturn and the crisis in sustainability by taking control of our lives and by examining what it is that we want in a home.

Rosemary describes conventional homes as ‘consumer junkies’ gulping down resources and producing only wastes. Yet, Rosemary’s solution isn’t to go out and commission an architect to design a state of the art energy efficient house such as we see in those ‘green’ magazines aimed at the well-off. Not all that many can afford to do that.

A book based on personal experience

This is the theme of her booklet — the retrofitting of a brick veneer, suburban house. Brick (and alumimium window frames and galvanised iron roof), because it is a low-maintenance material. Brick veneer so that Rosemary could easily remove interior walls to open up the place and so that her slow combustion wood stove could warm the interior during Katoomba’s chilly (let’s be honest here and say freezing) winters. Reading this, I was reminded of something that Jude Fanton from the Seed Savers Network said about buying a house in Byron Bay. Brick veneer, she told me, is the best buy because such houses work well in the subtropical climate. This leads to the question as to whether the much-derided brick veneer is the housing style for all climates.

Rosemary’s booklet is not simply about a retrofit to adapt her home to the seasonal variability of climate in Katoomba, high in the Blue Mountains west of Sydney. Embedded in it is a philosophy of life, such as assessing whether you move to more affordable premises or stay where you are, and making choices and setting criteria.

Not all that many years ago, Rosemary moved from a larger property at Blackheath, further up the mountains, to her present home in nearby Katoomba. In doing so she made the choices about the criteria for sustainable urban living that her book focuses on:

There was also the criteria of financial sustainability because she didn’t want her money tied up in a mortgage. As Rosemary says, by moving to a lower priced home you might be able to free yourself from financial anxiety in these economically troubled times, or at least set yourself on the path to doing that.

There’s a lot to learn about site analysis in her booklet and there are several site design plans. She covers the permaculture concept of designing by zones according to the frequency of access needed, energy principles derived from the permaculture design system and harvesting and storing rainwater. She even lists costs and offers a checklist to think about your home.

May I suggest that this would be useful reading for people reconsidering how they live?

It is, in essence, an ideas book and it carries that critical, analytical and self-assessing attitude that is embedded in the permaculture design system, of which Rosemary is a noted educator and exponent.

The book has an accompanying CD with a 20 minute or so video of Rosemary’s retrofit, produced by the local Lysis Films in Katoomba. It also has segments, potentially of use to educators, about particular elements of the retrofit. These run only a few minutes each and are sufficiently short to be of use by sustainability educators in workshops and courses.

The full 20 minute video would provide an informative case study as a leader to start a conversation on home energy and water efficiency. Educators would show it, then use the content as the basis for an ORID format (objective, reflective, interpretive, decisional) or other guided conversation.

In this way, the video works in the same way as Morag Gamble and Evan Raymond’s 15 minute production on local foods does as a leader for discussions about food systems. We have a number of longer video programs, but too few of this length that is suited to public events and sustainability education workshops and courses and that are also available on DVD for public showing.

Having said good things about the video, do I have any suggestions for improvement? Well. yes I do. I found that the video had too much footage of talking heads. You do need some of this, however more video of the works Rosemary has carried out and footage of some of them in action would have been useful.

Putting on my editor’s hat, my impression after reading A Good Home Forever was that this is the outline of a more detailed book. The bulleted points in it — and Rosemary makes extensive use of these — could in many cases be expanded. Although she might have covered what a more ambitious book might contain in her The Earth Users Guide to Permaculture, an expanded A Good Home Forever would apply that to the specifics of her Katoomba retrofit.

But would there be a market for such a book? I think so, and the reissuing by David Holmgren of his case study, The Flywire House, is evidence for this. Looking at the environmental/sustainability shelves of good bookshops, I see a variety of personal experience titles about people trying a 100-mile diet, moving the Mullumbimby to avoid a peak oil crisis or moving to the countryside. And while there are also plenty of titles dealing with resource efficient home design, there are too few case studies.

The difference with Rosemary is that she moved into a small city rather than escape to the countryside, in doing so emphasising the reality that urban living can be the catalyst for sustainable living.

The book, which is printed on recycled paper, is illustrated by Rob Allsop, who did the drawings in The Earth Users Guide to Permaculture. To reduce paper wastage, Rosemary made use of the inside of the cover for acknowledgements and some text. These are usually blank pages in publishing and I like it that way. There’s something odd about reading text on the insides of the cover and I don’t think it works well.

Rosemary sells the book alone for around $5, but for a mere $20 you get book + video CD. This is a complementary, useful package. And if you think that’s a lot for a CD and a 24 page booklet, think of its value this way — the cost is equivalent to only six cappuccinos, and its effects are likely to last a great deal longer.

Postscript: Following the launch of Rosemary’s book, Transition Blue Mountains held a seminar of home retrofitting for resource efficiency in Katoomba, attracting more then 100 people. Rosemary’s CD was shown at the event.