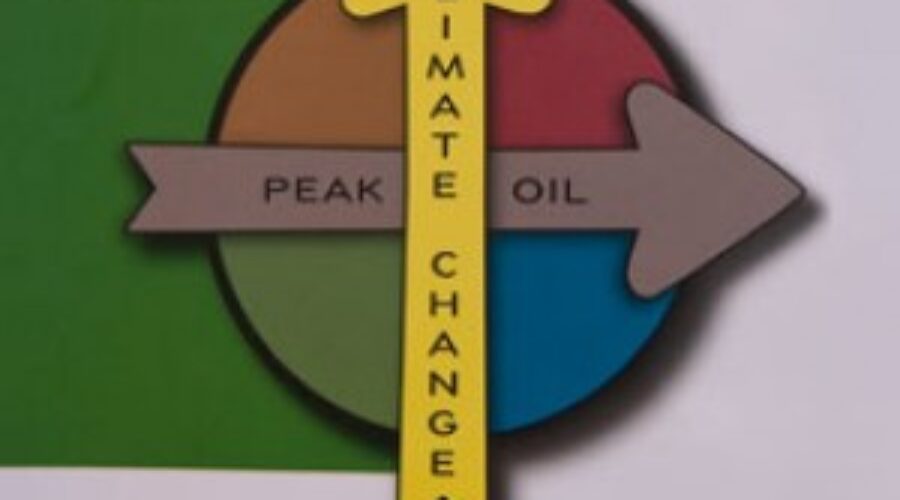 Future scenarios — both scary and hopeful

IT MIGHT BE UNDERSTANDABLE that David Holmgren’s latest book, Future Scanarios, leaves some readers feeling rather depressed. That’s because of some of the scenarios he outlines, that are likely to result from the combination of climate change and the peaking of the global oil extraction before 2015, are rather glum.

Most of us have at least a working familarity with climate change and its likely consequences, however the peaking of global oil extraction and the impacts that it is likely to bring are less known. Peak oil, as it has become known, is the time at which extraction from economically accessible oil wells reaches its peak. After that, extraction plateaus awhile, then starts to fall below demand. The effect of this will be to boost oil prices and the cost of anything that uses oil in its extraction, manufacture, processing, transportation or consumption. New oil field discoveries, such as those likely to be accessed by deep sea drilling made possible by the retreat of the northern ice cap, will bring temporary relief but are unlikely to affect the downward tend in global production.

Peak oil is not a theory. The US peaked in 1970, Australia in 2000, and the North Sea wells peaked in 1999 — there, production had dropped by 43 percent by 2007. David Holmgren made this point — that peak oil is reality, not theory — while speaking at the Conversations With Authors at the Randwick Ecoliving Fair this year. There is plenty of empirical evidence for the peak. As for the projected price rises as supply falls below global demand for oil, that relationship is basic market economics.

Future Scanarios is more or less a paper version of David’s website of the same name. It’s not a large book in terms of number of pages, but it nonetheless serves as something of a wake-up call for those still in the slumber of an oil saturated present.

People familiar with David’s reasoning will find much that is familiar in the book. David takes the reader through his four scenarios that range from the consequences of business as usual to futures ranging through green technology, the survivalist ‘lifeboat’ scenario of social desperation that can end only in civilisational collapse, and his preferred scenario that he calls ‘earth stewardship’.

This latter invokes life as decentralised, self-governing towns and communities, with at least a partial abandonment of the cities which are mined for their materials. Life continues in the suburbs, however, though far from its present form. Although he does not go into detail in Future Scenarios, the multi-generational model of suburban conversion that David discussed during his 2006 national tour with US journalist and peak oil analyst, Richard Heinberg would likely be relevant here.

The model sees the development of multi-generational households and a substantial increase in food production, water harvesting and the use of renewable energies in the suburbs. In terms of urban infrastructure, it is a model I first encountered in the 1990s while working for Dr Ted Trainer at UNSW and that he called the ‘conserver society’, the title of a book be published on the topic. Through his books of the period, and in his courses at UNSW, Ted presaged many of David’s ideas on suburban conversion. This ‘ruralised city’ scanario is a model criticised by the authors of Resilient Cities, including the noted planner and educator, Peter Newman.

The book does not explore how this model would evolve in any detail — it is an investigation using the established scenario methodology that precludes detail, focusing instead on larger trends. The method has been used by government, corporations and civil society for some decades and takes existing demographic, resource, political, economic and other factors and projects how they could evolve within variables set for each scenario. Trends in oil production and other resources form the basis onto which David grafts projections about the possible impact of climate change to generate his four scenarios.

Earth stewardship is a model that is unlikely to be found universally appealing because it renders useless the skillsets of many. It is basically an agrarian future in which manual skills are those most valuable. It would be a profoundly different future, one less secure in many ways. Without hi-tech medicine, old diseases could return with little hope of cure. There is also the risk of a return to parochialism were global electronic communications to cease.

The scenario raises questions. How would human knowledge be preserved? Would we lose the extensive knowledge base drawn up over thousands of years of civilisation? Would there be any capacity to cooperate on projects of common endeavour over large regions ?

Writing this review, I recall ideas from the 1970s that were part of that exploration of what we then called ‘intermediate technology’, a term coined by British economist, Fritz Schumacher. Propelled by the 1973 oil crisis — the embargo of the West imposed by members of the Organization of Arab Petroleum Exporting Countries, in retaliation for Western support for Israel during the Yom Kippur war of the same year — intermediate technology (later to be renamed ‘appropriate technology’) sought simpler, cost-effective and more easily maintained tools and technologies to accomplish life needs. It was the dawn of renewable energy systems and paralleled the rise in popularity, although it remained organisationally separate to, organic gardening and farming.

Initially, intermediate technology found practical application in the intentional communities that developed during that period, however there was substantial interest among the more innovative of urban youth, especially those that considered themselves a part of the ‘alternative culture’ of the time, and by international development practitioners. Appropriate technology would certainly come of age in David’s earth stewardship society.

David outlines two ways of looking at his scenarios — as separate trends and in a nested structure. For me, it is the nested structure that is the most realistic as it recognises that different trends exist simultaneously, though at different scales and in different social milieus, in Western and, probably, other societies. Thus, the 1970s alternative culture existed within a growth economy then still expanding. Today, David’s earth stewardship model exists as loosely connected components in contemporary society focused around a number of movements such as permaculture, climate change and some elements of environmentalism.

Another way of looking at this is to see it as the new being born and prototyped in the bosom of the old. From that comes the resolution of what is a perceived contradiction among change agents making a living and pursuing their agendas within the infrastructure of a society they would severely modify or replace. Realistically, they have to live in both worlds at the same time, with a foot firmly planted in both. We all do.

Elements of the earth stewardship and the green technology scenarios are found within the permaculture milieu which David has some responsibility for co-creating. Here, there is a creative tension between the advocates of a basic and largely ruralised lifestyle and those who seek socially constructive solutions through green technology. Fortunately, David sees green technology a starting point for his journey to earth stewardship. The transition will come as energy supplies run down over time.

It is the force of David’s reputation, based on his role as co-originator of the permaculture design system and in recent years as its most prominent thinker, that leads to the ready adoption of his ideas by those within that milieu.

The influence of government

David writes that government has a substantial influence on these different nested scenarios, with local government holding most promise of influencing community-based initiatives that would form elements of the earth stewardship model. Through legislation, regulation and subsidies, local government has an influence on the structuring of households as, in effect, microcosms of the lifeboat scenario yet, at the same time, as components of the earth stewardship model.

What is implied here is David and his partner, Sue Dennet’s notion of the ‘household economy’. This views the household — whatever its makeup — as primarily a productive rather than consumptive entity. In reality, of course, households would be both consumers and producers, especially where they participate in a community-based, non-monetary system of exchange such as time dollars or LETS (Local Exchange and Trading System).

Seen as ‘prosumer’ (producer-consumer) entities and as micro-lifeboats, households would:

Local government, though in still-too-few cases, has made a start on educating people in these basic skills. Some offer workshops and courses in sustainable living where participants pick up largely forgotten skills in what Rob Hopkins, spokesman for the Transition movement, calls ‘skill-up for powerdown’ — growing food, storing water, producing home energy and other like things. Some councils facilitate the setting up of community food gardens and farmers’ markets. Others install photovoltaic systems on their buildings.

These things are not done as some deliberate policy of popular skilling-up but because they are components of the green technology model, the most popular model of sustainability, and because it is compatible with local government policy and practice for ameliorating and adapting to climate change. This motivation does not matter, of course, because such initiatives smooth the way to a earth stewardship society and have a firm place within it.

Both idea and template

Future Scenarios will no doubt be criticised because it will be seen to offer little option other than the evolution of earth stewardship societies.

Green technology advocates might feel a little chargrined that their preferred future might be only a transitional form between the present and the future. That is understandable, because much of the search for solutions to impending global trends focuses on technological fixes even though some proposing this foresee a less growth-oriented, perhaps even an economically steady state society emerging.

It is in discussing these different models that Future Scenarios provides a service. The book, and the workshops David offers as a means of exploring the topic more fully, introduce a sophistication to permaculture design that is not always present in its popular forms. In doing so, David once again offers permaculture a new lease on life as an applied technology for a community-based response to climate change and peak oil that complements that being developed by the transition initiative movement and that offers opportunities to the more innovative permaculture and sustainability, community-based organisations that are capable of addressing those parts of society outside their usual sphere of influence.