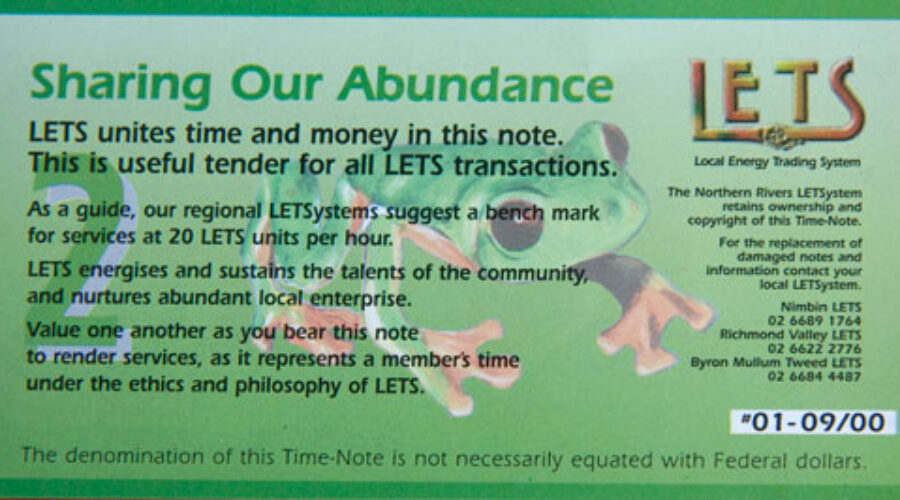 A local currency that was

Photos show the currency issued by the combined northern NSW LETSystems in the 1990s.

IN THE LATE 1990s the combined LETS systems of the NSW Northern Rivers region — aka the Rainbow Region — issued a printed local currency, possibly the first issue of such currency in recent times.

The currency was negotiable for LETS transactions — LETS is an acronym for Local Exchange and Trading System — by members of Northern Rivers, Nimbin and Mullum Byron Tweed LETSystems.

LETS is a community-based trading system than operates either cashless or with partial federal currency. This latter was introduced in the 1990s so that people could meet taxation and other obligations only serviceable in federal currency. Usually, LETS transactions are negotiated between supplier and user for an agreed price in LETS credits, the transaction being entered on a database and member accounts adjusted accordingly. This enables trading without direct reciprocal exchange, which diffentiates LETS from barter where the exchange of goods and services is direct between those in the transaction. With LETS, you don’t have to swap something of equal value with the person you trade with.

Once, Blue Mountains LETS, a mere 90 minutes by electric train west from Sydney, was the largest such system in the world. Blue Mountains LETS negotiated with the Department to Social Security to clear up ambiguities around beneficiaries receiving payment in LETS for trading in the community. According to Blue Mountains LETS, trading made it possible for unemployed people to maintain their worklife skills and was, therefore, a socially beneficially thing.

One Australian LETSystem — I don’t recall whether it was Blue Mountains LETS — approached the taxation office about paying tax in local LETS currency. Unfortunately, the department declined.

As I understand the history, LETS was developed in Canada by Michael Linton. He came out to Australia in the 1990s and spent some time here working on LETSystems, particularly one that never eventuated. That was Sydney LETS and Michael and locals working with him envisioned it as a metropolitan-wide trading system.

I recall Michael and the team working into the night at the Old Randwick Community Centre in Bundock Street, not all that far from the newer centre presently being retrofitted for energy and water efficiency and being fitted with a PIG — a Permaculture Interpretive Garden which will serve as a training garden for Randwick City Council’s Sustainable Gardening course for home and community gardeners, and for school and other visitors to the planned education program.

Somehow, the association of LETS with the Centre is fitting as, just down the hall from the LETS office was the office of another metropolitan group that spawned a number of regional sub-groups, Permaculture Sydney. We offered our 110 hour Permaculture Design Course from the premises and out of that grew the Centre’s own community garden — Randwick Community Organic Garden.

Sydney LETS didn’t get quite as far as issuing its own currency, however.

Why was it that northern NSW proved economically fertile ground for the issuing of a local currency?

I believe the answer is due to demographic reasons. The region, particularly the sector inland from Byran Bay on the coast, through the regional small city of Lismore and further inland to the green fields around Nimbin became Australia’s premier counterculture zone in the early 1970s and attracted a  youthful and mainly innovative group of what was then known as ‘new settlers’ — rural reinhabitants whose previous lives had been spent in the cities. These people, searching for new ways of living, created their own culture over the years and, as it and they matured, the milieu proved intellectually and culturally susceptible to novel ideas like starting your own currency.

Seen in this light, the Northern Rivers LETS currency can be seen as a natural outgrowth, as an emergent property, of the culture that emerged in that region in those not-really-so-distant days.

It was the permaculture movement of the 1980s that had much to do with the development of LETSystems in Australia. Robert Rosen, an innovator in the permaculture approach to economics and ethical investment has written on this website about the history of permaculture’s involvement in community economics through initiatives such as the Permaculture Earthbank. Also at work at the time was social investment innovator, Damien Lynch, who started with August Investments (still going) and went on to help found Australian Ethical and Ecoforest Pty Ltd.

In many ways, the permaculture of the 1980s was quite different to what it is today. Then, there was, proportionally, a great deal more focus on and involvement in things economic and community development than, perhaps, there is today. For one thing, the ideas of EF Schumacher, the British economist who wrote Small Is Beautiful – Economics as if People Mattered were more in the forefront or permaculture thinking. There was an active interest in technologies such as the intermediate or appropriate technologies championed by Schumacher. There was also influence from an economic-oriented US group, the Schumacher Society.

Some of those early permaculture adopters had a more social focus to their use of the design system, being involved in community work of different sorts. Being both a part of mainstream society and at the cutting edge of a new social movement, it was more or less natural that they would turn their attention to innovations like LETS when it came along.

Soon, regional permaculture associations had adopted LETS trading. Then those in the permaculture of that time let it go where it wanted to go. LETS spread and broadened and the golden age of LETS in Australia dawned like a warm orange sun coming over the horizon.

This was the 1990s. Around the start of the new century however, the number of LETSystems had gone into decline. “What’s happened to LETS?”, was a question that you would be asked. Blue Mountains LETS shrunk as did others. LETS survived, but as a microcosm of its earlier promise.

I don’t know why this happened, why something that caught the public imagination and bloomed went into sudden decline. Was here insufficient popularisation and recruitment into LETSystems? Was it that people became wealthier and found no need for LETS? Did development of the system fall below a critical level? Did permaculture change and take on a new focus?

One explanation I have encountered a number of times is that you couldn’t buy all that much by way of daily living necessities through LETSystems. It was easy to trade for a beijing massage or some similar service, but an incapacity to buy food, construction materials and some skills became LETS’ weak point. This might be something worthy of the emerging community currencies mulling over.

A new dawn and rebirth

It was only a couple days ago that someone said this to me: “You know, those things we were ivolved in years ago are only now coming into their own time”.

What he was saying was that we should be cognisant of the ideas innovation curve when we look back on these innovations in social history, such as permaculture and LETS. All new ideas are born of innovators on the creative fringe of society, are taken up by early adopters who tweak the innovators’ ideas and make them workable and then are taken up by early and later mass adopters.

Could it be that this early phase of LETS, whose history I have briefly described, was the innovator and early adopter stage? And that what we are now seeing with what seems to be a creeping popularity of LETS and local currency ideas being the start of a late early adopter phase, a time when the wrinkles of those early attempts will be ironed out of the fabric of community econmics and newer, better systems developed? Could this be where the work of the Transition movement in local currencies fits into the development of the idea?

I hope so. The continuance of LETSystems suggests a level of popularity for an idea that persists. It may be that the permaculture movement and the first phase of community economics focused on LETS in the 1990s has unconsciously handed on the idea to the emerging Transition movement and that it is here that we will see the action. People and ideas, we know, flow from place to place and come together in new milieus that emerge from the turmoil and churn of societies and global trends. This would comply with a trend that has seen ideas popularised in the permaculture movement only to be taken up and developed fully by organisations and movements beyond permaculture.

Whether these are the social dynamics that will recreate those early innovations in LETS and similar schemes as something new and exciting enough to capture the public imagination will be known in time. Let’s watch and, perhaps, help make it happen.

More on LETS in Australia: Find links to LETSystems across the continent — http://www.lets.org.au/