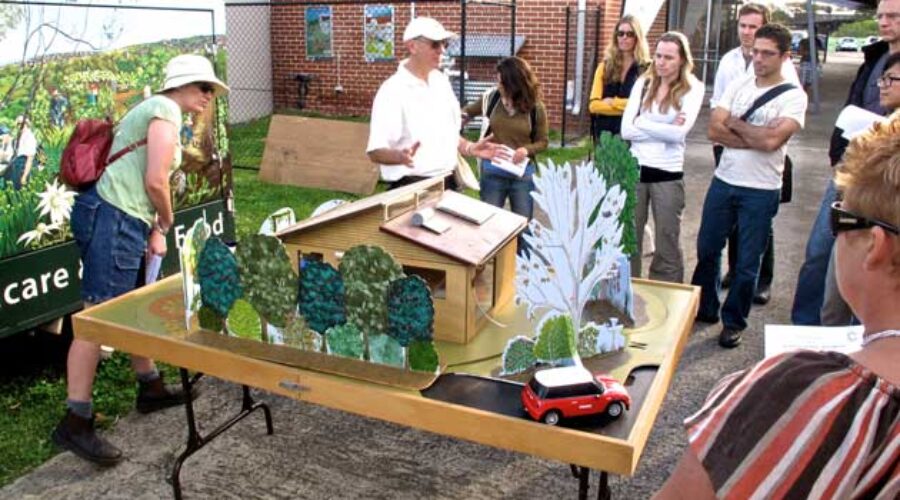 THEY CAME FROM the local east, a few from the more distant north and a few from the City of Sydney local government area… and even a few from further west. In its first major public event, the Randwick Sustainability Education Hub attracted an estimated 200 people, over the two and a half hours it was open, to National Permaculture Day 2011.

The Permaculture Interpretive Garden (PIG) is a component of the retrofitted Randwick Community Centre, the buildings and grounds of which have been refurbished for energy and water efficiency, including a grid-connected wind turbine and photvoltaic panels. The retrofit demonstrates simple design modifications and technologies that are commercially available. Having them accessible in a public place, and having guided tours and interpretive signage (designed by Rob Alsop who illustrated Rosemary Morrow’s book, Earth Users Guide to Permaculture) provides visitors with take-home ideas that they can implement. The Randwick Sustainability Education Hub encompasses the retrofitted building and grounds plus Randwick City Council’s Living Smart, Native Haven, Early Childhood Environmental Education and Sustainable Gardening courses, all free events that are held there.

The PIG itself is a new type of public open space that combined the functions of a public park and serves at the same time as an educational facility for council courses and as an activity centre for local community organisations whose focus is sustainability, food initiatives and community development. The Hub serves as a Sydney Food Connect City Cousin, where subscribers to the community-supported-agriculture scheme collect their weekly boxes of seasonal, affordable organic food.

Even though there remains work to be completed in the PIG, such as installing tables and benches, roofing the pergolas, establishing the orchard and building the balcony/courtyard demonstration, there was plenty on the day to inspire visitors. Transition Sydney’s Peter Driscoll provided an introductory workshop on permaculture design, Solarch’s Terry Bail, an architect specialising in solar design who designed the community centre energy retrofit, took visitors for a tour of his work and Russ Grayson, who was on the Waterwise Trail steering committee for the project and is affiliated with the Australian City Farms & Community Gardens Network to advocate the value of such enterprises, led a tour of the PIG and grounds. The Spots, presumably named for the cafe strip nearby, offered a harmonious accapella of environmental songs.

A significant event at National Permaculture Day was council sustainability educator, Fiona Campbell, announcing the Hub’s outreach program. This will see community organisations hold monthly events on a Sunday afternoons. Led by well known sustainability education planner and trainer, Graham Collier, a group of graduates from the council courses and others have been meeting over the past couple months to develop a program of activities based at the Hub. Significantly, some of those graduates were involved in the planning and management of the day, all part of Fiona’s idea to develop the ability of Eastern Suburbs people to skill-up to make things happen for themselves.

This was an auspicious day for the Sustainability Education Hub and just seeing all of those people milling around the raised planters in the PIG, clustered in tour groups inspecting the energy and water efficiency retrofit of the centre and engaged in convivial chatter around the food and coffee provided by council demonstrated that there exists a keen community interest in these sustainability initiatives. Thanks go to those who attended, to the Hub outreach volunteers, to Randwick Council and, especially, to National Permaculture Day for making it happen here under the blue skies and on the sandy soils of the urban east.