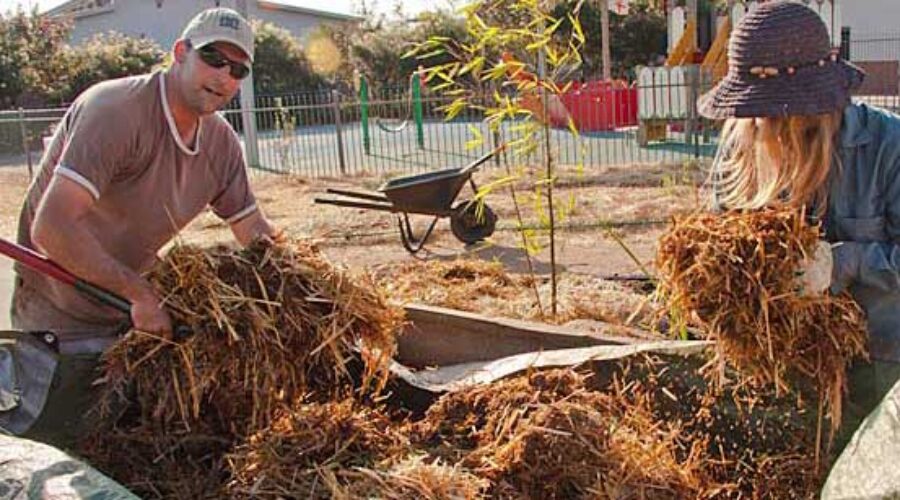 A new forest rises in Randwick

The mission: Establish a food forest at the Permaculture Interpretive Garden, one of the components that make up the Randwick Sustainability Hub.

The difficulty: Hard work (though maybe not all that hard) in the warm Spring sunshine.

The process: Identify needs > produce a plan for the forest garden > implement the plan over time.

It was time to implement the plan. Around a year ago, the area of low-quality, nutrient and moisture deficient sandy soil (in other words, typical Eastern Suburbs dirt) that is to become a forest garden bristling with fruit and nut trees was planted to the first of a series of green manures.

A green manure is a crop of mixed legume and grass, such as the wooly vetch and oats planted in the forest garden area. A legume is a member of the pea and bean family that provides our soils and our plants with the important plant nutrient, nitrogen. The oats or grass planted with the legume breaks down in the soil to add organic matter to it. This becomes accessible to our crops and increases the moisture-holding capacity of the soil.

In our struggle to turn the infertile into the productive, over the past year a number of green manure crops have been planted and then incorporated into the sandy soil. Eventually, we hope to see that dark coloration of fertility creeping down through the soil profile.

Almost a week ago, council’s garden education and Permaculture design educator/consultant, Steve Batley, whipper-snipped the last of our green manure crops and covered it with a thick, juicy layer of stable sweepings fresh from the police stables (ie. the place where they keep the horses, not their riders).

In the same week, for several intensive days of long hours under the fine, warming sunshine, three of us laboured to complete the planting of the major part of the forest garden. Cooled by the occasional south wind or that off the blue waters of the Pacific a couple kilometres to the east, and carefully watched over by a big, sneaky magpie that would swoop to pry and prise at the soil after we moved on, we established a young windbreak of bamboo (varieties that can be used as a source of gardening materials such as stakes and the young shoots of which can be eaten), sugar cane and an ice cream bean tree. When these grow they will shelter the fruit, veges and herbs in the forest garden from winter’s harsh, blustery and destructive winds and form a little warm microclimate in their lee. Maybe, one day, the bamboos will provide feed stock for a future biochar BBQ.

We made use of the Permaculture design principle of designing for multiple-use by planting an edible windbreak. As well as the bamboo’s edible shoots, a few olive tree seedlings and the native, small-leaf lillypily (Sysygium leuhmanii) had already been planted to start the windbreak—an added benefit of the lillipilly is that its small, pinkish, bell-shaped fruit can be eaten as a bushfood. The sugar cane, a tall, flexible grass that bends with the wind and in so doing deflects it from what will grow into our forest garden, is also edible, the sweet white pulp of the stem being chewed to extract the juices. Below these plants in the windbreak, lavender and rosemary—with their tough, wiry stems and small, moisture-retaining foliage—have been planted as an understorey.

The forest garden is modelled on the structure of the natural forest, with its canopy of trees, understorey of small trees and shrubs and ground layer of smaller shrubs and herbs.

On the lee side of the windbreak there are now the fruit tree seedlings that will grow into the canopy of the forest garden—lemon and tangello, orange, lime and pomegranate as well as others, and a ground layer of long-term vegetables such as Jerusalum artichoke, yacon and globe artichoke that accompany the herbs established as the understorey. There are the fast fruits like banana and pawpaw and legumes such as the native running postman and Hardenbergia violacea. Blueberry and other berries have been installed as a taller ground layer in the evolving food forest. This is a hydrid planting system of exotics and natives, legumes and fruit plus plenty of herbs and flowers whose blossoms will not only add visual beauty to the garden but will form the basis of the insect food web that is part of our integrated pest management strategy.

The frogs and the birds..

On the last day of the food forest rapid planting program we installed a pond in the adjacent native plant garden. The garden was built to show people—who for some odd reason don’t want to grow food—that they can have a low-water-use, low-maintenance native plant garden and so avoid the dominating tyranny of lawn and the consequent and boring business of lawnmowing.

While installing the pond, something unexpected occurred when we unfolded a piece of plastic sheeting and discovered two small, brown frogs hiding in it. They took one look at us and leapt straight into the pond, thus becoming its first amphibians and, we hope, the first of many.

There was a definite correlation between the time of day and our state of tiredness. It was when we sat back to contemplate our new forest garden bristling with fruit tree seedlings that we noticed the plethora of birdlife in the Permaculture Interpretive Garden. Here’s a list of the avifauna that stopped off there:

Well, that wasn’t all of the wildlife. When we were clearing the rill that moves water from the pond to the swale around the food forest, we looked down and there, in the grass, was a big, juicy, shiny black eight-leg with an ominous, bright red streak down the back of its abdomen.

The food forest is an ongoing work and our burst of activity before the energy-sapping heat of summer sets in marked the conclusion of phase one planting. Phase two will include vegetative wonders such as the Japanese raisin tree with its strange-shaped fruit and other fruits and nuts including Australia’s-own macadamia.