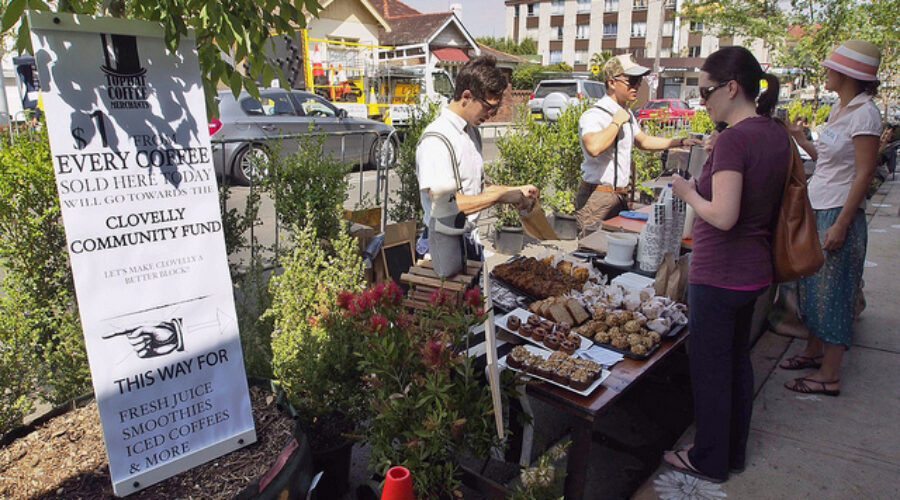 FOR MONTHS they had been meeting and now, on the warm Sunday morning of October 27, they were ready. How many would turn up? Would it all go well? Would it be a success?

The transformation started. The trees arrived and were unloaded. Tables and chairs were set out. Street barriers put in place. It was scheduled to start at eleven but people started to turn up before that. Some occupied the chairs around the tables that now occupied what had been the parking lane. Others wandered. A few patronised the coffee carts, sitting back to enjoy the first of their day’s brews.

This was the day we had been preparing for. Somehow, over the previous couple of months of organising meetings, things had come together and here, this morning, was the evidence of that.

Check out the gallery below…

Clovelly Better Block modelled itself on the Better Block projects in the US, where it started. There had been one or two in Victoria, however I was told those were smaller events than Clovelly’s (sorry Melbournites), which was the first in NSW. The idea was to bring new life to a rather dull block of Clovelly Road, that long strip of asphalt that takes you to the big carpark on the Clovelly clifftop from where the small beach and inlet are accessible.

From the day’s temporary installation, learnings are being drawn and a report is to be handed to Randwick City Council that will carry recommendations on how to make permanent some of the ideas, and others collected in the survey carried out through the day, that will renew this uninteresting length of streetscape. Phil Stubbs, one of the instigators of Clovelly Better Block, hopes that other blocks on Clovelly Road can be similarly converted into humane, pleasant, pedestrian-populated streetscapes.

In the practice of placemaking, what Clovelly Better block did was to make the footpath, usually regarded by local government and citizens as a thoroughfare connecting places, into a destination in its own right. That this is a good thing can be traced back to Jane Jacobs who was advocating the idea decades ago and who wrote the classic on humanising urban streets and footpaths, The Life and Death of Great American Cities.

To repopulate the streets and footpaths means to install linger nodes where people like to spend time. The stretch of Clovelly Road where this was done today, on a temporary basis to assess the idea, already has a few cafes and that makes a good start. Footpath seating, whether outdoor eating places for cafes or the pop-up parklets that have been installed in some American cities by replacing a couple car parking spaces, make good linger nodes especially when shaded by deciduous trees.

It was difficult to make your way along the footpath during the Better Block event, such was the press of people. Had you attempted to do so you would have passed food sellers, a flower stall, a roomful of kids engaged in the splashing of colour on paper that is their art, an information stand for Car Next door, the peer-to-peer carshare bringing the sharing economy to Sydney’s Eastwrn Suburbs, a coffee card doing good business and the performance space with music, bands and community singing.

Walk on, and just around the corner you would have encountered another coffee cart, seating with people engaged in conversation and the consumption of the stimulating beverage and tasty cakes, and Patrick with his bicycle clinic. Look over the road to a bike showcase where you could take a test drive on bicycles powered by lithium ion batteries and the local school’s food sales.

Crossing the road would have led you to the Permaculture Sydney East team busily engaged in planting into a patch of largely unused public land a lime and lemon tree, a couple lillipilly (an Australian bushfood species), veggies and herbs while entertaining children with painting and making newspaper origami seedling planters.

The experiment is over and it’s been a success. Students are now to turn the survey into data and that will feed into the report to council. After that we will hopefully see something permanent and the transformation of streetscape dull to streetscape vital and populated.