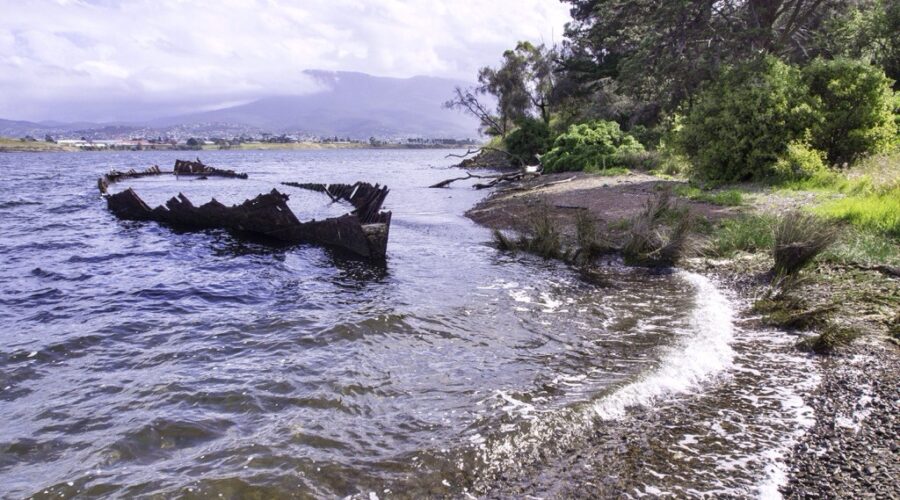 HOW CAN IT BE that a Nineteenth Century fiction writer, an old barquentine and the Derwent River have something in common?

That’s something I set out to discover on our Tasmanian journey. It wasn’t exactly a discovery, more a rediscovery of something once known… it was something I was doing to satisfy my own curiousity.

I had visited the little bay we sought many years ago when a resident of this city. Although I didn’t remember the detail of how to find what we sought I did remember how to get into the general area.

Or so I thought. We ended up in a subdivision I’m sure didn’t exist when I came this way in times past, and like many of its type the roads wound and twisted across what once was most likely a farmer’s field. These we follow until we manage to escape the clutches of this bit of suburbia.

We drive on and, navigating by guesstimate (never a good idea) take a turnoff from the highway and descend towards the Derwent. Over a little hill while I watch the countryside unroll on the iPad’s map and Fiona drives, until the map says we are where it is we want to be. Down the other side of the hill and I glance at the river and realise that there is something familiar though temporally distant about this place… I look back and there, in the shallows, is what we seek. The Otago.

This isn’t called Otago Bay for nothing and when I looked for where the remains of the Otago lay it was the name that gave it’s general lcoation away.

I grab my camera and get out. Walk over, down to a shoreline littered with the discarded flotsam of the packaging industry and make my way to the rusty hulks laying a few metres out into the river.

THE MASTER
The Otago was a three masted barque, an iron ship built in Scotland in 1869 and transferred to the Australian cargo trade.

That’s the ship. What is more interesting is the ship’s master who went by the name of Joseph Conrad, a name familiar to anyone with a little literary knowledge. Conrad’s birth name was Józef Teodor Konrad Korzeniowski. He was Polish and a quote from the novel that introduced me to his work years ago, a novel I have revisited several times, aptly describes our feeling while searching for the hulk: “We penetrated deeper and deeper into the heart of darkness”.

A SHORT LITERARY DIVERSION
The Heart of Darkness. Conrad’s story is told as a monologue that takes place on a ship in the Thames, while waiting to dock. The protagonist in the novel of that name is an ivory trader living deep in the Congo and a traveller by the name of Kurtz. You could say they go a little crazy, but I leave it to you to judge that by encouraging you to read the book — it’s only a short novel. It’s also a somewhat disturbing tale of the Congo, the country and the river, as well as attitudes about natives and civilisation and the horror that can grip the minds of men… “The horror! The horror!” as one of the characters says. It is also a novel based in part on Conrad’s time spent in The Congo where he commanded a riverboat.

Heart of Darkness stimulated another fictional work of horror, this one a film called Apocolapse Now. Directed by Francis Ford Coppola, it too is a story centred on a river. It’s the story of a Captain Willard, a US soldier tasked with tracking down a Colonel Kurtz who has gone native and, supposedly, insane, killing people. Willard’s mission is to eliminate Kurtz “with extreme prejudice”.

As well as Heart of Darkness, Apocolapse Now also draws on Michael Herr’s book of reporting from the war, Dispatches (still on my bookshelf after all these years) and on Conrad’s Lord Jim, according to the Wikipedia entry on the film. It’s the story of Willard and the patrol boat crew’s journey along the Mekong in search of Kurtz through the reality distortion field that was the war in Vietnam. Along the way they encounter a gung-ho US Air Cavalry officer, Lieutenant-Colonel Kilgore, and Willard and Kilgore go surfing (both are goofy foot surfers) amid a skirmish with the Viet Cong. The interesting thing for me is that, many years ago now, I met the character that Kilgore was supposed to be based upon. His name was Colonel David Hackworth and he was a much-decorated US career officer.

THE HULK
How did Conrad’s trading barque end up rusting on the Derwent’s eastern shoreline?

Like other vessels of the time, when it finished its sea trading days in 1903 it was converted to the humble role of coal lighter on the Derwent. The Otago was towed to its present location, what would become Otago Bay, in 1931 and was cannibalised for scrap metal until all that was left was the rusting lower hull we see in the shallows today.

There, it shares the shallows with the hulk of the Westralian, a steamship towed into the bay and cannibalised in the 1930s. Thoughtfully, Clarence Council and the Polish Association have erected a commemorative sign about the Otago and this you encounter once you walk over to the river bank.

The hulk of the Otago is much as I remember it as I stood here decades ago, a sad, forlorn reminder of the greatness of its seagoing days and of its novelist captain, Joseph Conrad.

In the scrub, by the bay — a rediscovery

IT WAS AT THE END of 2104, December, when I accidentally rediscovered the Tyler family graves. My discovery of them