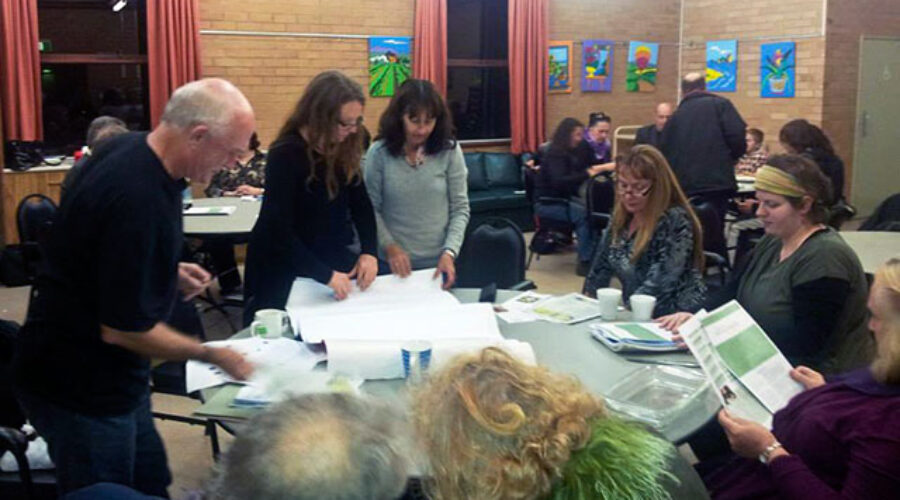 A journey, a conversation cafe, a garden

“Bring some warm clothes, it’s getting cold in the mountains this time of year… and, oh, we’ll se stopping at Penrith where I have a job interview… shouldn’t take more than half an hour”.

And so a somewhat convoluted and lengthy journey to the Blue Mountains starts when Virginia picks me up from home that warm afternoon in late May and we navigate our way across town to Parramatta Road.

The Great Western Highway starts where Parramatta Road stops, and we follow it to the once-was-a-town, now a suburb, of Penrith.

I wander the main street while Virginia does her job interview. It’s been years since I’ve set foot in the place though I’ve bypassed it many times on my way west to the mountains, yet as I walk the main strip in search of a decent-looking coffee stop I quickly realise that Penrith is an economically depressed sort of place… there are few people on the street, business seems slow in the underpopulated shops I walk past and the place has that seen-better-days feel. It was later that Virginia told me that the region around Penrith is low-socioeconomic. I believe her and, I wonder, what sort of economic development program could lift the prospects of local people?

Fortunately, I find a decent cafe at the end of the main commercial strip… black walls, dim lighting, two smart young women, friendly and clad appropriately in black dresses competently running it. The rest of my time in town I spend sitting in the park as the fading light of day tinges the canopy of the cabbage tree and Canary Island date palms yellow, as day heads towards evening and as Virginia’s half-hour job interview passes the hour-and-more span.

Then it’s off towards the Blue Mountains… only… only… “Oh, I forgot… I forget to get wine in Sydney… and petrol too… look–we’re running on empty!… I’ll drive carefully so we don’t use much of whatever fuel might be left… I’m sure we’ll make it to the service station at Glenbrook”, Virginia says with an air of surprise in her voice as we exit Penrith, turn onto the highway again and as Virginia accelerates with what seems to me to be somewhat less than ‘careful’ in regard to consumption of our remaining fuel. I retain my skepticism at her optimism.

Some might call it preaching to the converted, my talk about the work of the Australian Food Sovereignty Alliance with Permaculture/Transition Blue Mountains there in the community centre in Lawson that night. To think that, though, is to misunderstand how social change works. Just as throwing a pebble into a pond produces ripples of energy across its surface, so talking with groups already involved in the sort of things you are talking about is akin to that pebble spreading ripples of knowledge and motivation across the social milieu… that’s why it’s called the ‘ripple effect’. Those sort of talks are essentially educational and motivational rather than informational.

First things first, though, and it’s the shared evening meal that provides the tasty introduction to the evening. After that I ask a couple questions designed to gauge the readiness of the group for what I would talk about—what their level of knowledge is. Here’s the questions:

That done, it’s time to stop talking and to start people acting. So, with the assistance of Virginia and Katoomba online maven and community gardener, Kat, I set three different questions to people at three different tables for them to work on. After awhile, they swap tables and after doing that twice they have all had a go at all of the questions. And those questions:

Those in the know about this sort of stuff will recognise the first two as ‘mapping’ questions devised to describe the existing situation. The latter is speculative.

The event was quite convivial, with all there avidly participating. The ideas, written by participants on sheets of A1 flip chart paper, I brought back to Sydney to write up, retaining a copy for the Australian Food Sovereignty Alliance and returning a copy to the host organisations for their own use.

For the Alliance, the information paints an image of the state of the fair food movement in the Blue Mountains. It will feed into what we do and how we do it.

It’s been good, after overnighting at Virginia and Fraser’s house in Katoomba, to go with her for a look at the Blue Mountains Community Garden with its collection of heritage apple trees.

The apples and fruit trees there, the plums and the nuts and the hazelnut trees, have by this time in the season shed most of their foliage, bringing a cold and almost forlorn look to the community garden. That’s brightened, though, by the appearance of Michael and Fred, two friendly middle aged guys who spend two days a week each in the garden working on their projects. Seemingly, community gardens cultivate social friendships as well as fruit and nuts.

Farewells are usually sad affairs even when they’re temporary. That’s how I feel now that I’ve said farewell to Virginia and watched her turn her vehicle westward towards Blackheath, as I turn on foot to check out the city, something I haven’t done for some time. It’s good to find Katoomba’s long-running food co-op still there behind its shopfront, to have a conversation with the guy at Summit Equipment about how they manufacture adventure equipment right here in Katoomba and, unlike Penrith, to find a multitude of coffee shops dotting the main street.

Oh, yes… that warm clothing Virginia told me to bring, it stayed in my bag all the time I was there (even the locals commented on the unseasonably warm weather)… and that journey running on empty from Penrith to Glenbrook… my pessimism was wrong and Virginia’s optimism was right… we just made it… maybe her driving was more careful and moderate than I thought. I never mentioned that to her and, if she ever reads this, I guess I’ll have to offer her an apology for ever having such dire thoughts about her driving.