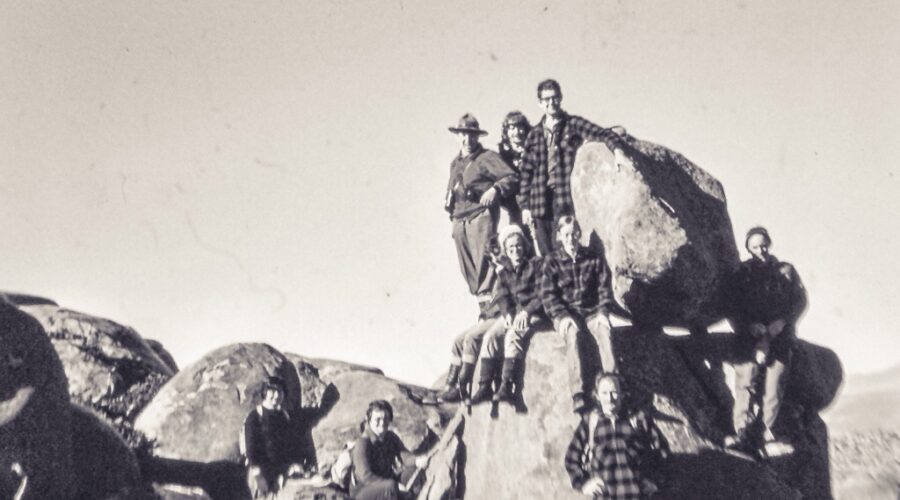 THINGS ARE NEVER quite the same when you return. They are similar, but not quite as you remember. There’s always something different… something you can’t quite put your finger on. That’s how it was when I returned to the rocking stone.

The cloud was low that day. We had left The Springs some time before, taking the trail that passes below the vertical, dolerite cliffs of the Organ Pipes. Reaching the junction with the Zig Zag Track, we take that route and ascend steeply until the terrain becomes more horizontal than vertical and deposits us on the summit plateau. Here, it’s a rock world… an undulating landscape populated by boulders and bold outcrops smoothed by millennia of winds and weather and interspersed here and there with the tough, wiry, snow-and-wind-resistant subalpine vegetation that you find on top of Mt Wellington.

We take the south trail and wind between rocks and beside the shallow tarns that become ice when the seasons change. The cloud, already a grey ceiling not far above us, here descends to obscure the landscape, then parts to give us glimpses of the boulderscape way over towards Thark Ridge.

It’s starkly beautiful up here above the treeline… a primordial landscape where the bones of the earth expose themselves only to be weather by the season’s heat or cold, cracked by the freezing and thawing of water that forces solid stone apart and exfoliated by the fracturing of expansion in the heat of summer. Nature is still the former of landscapes here.

Just before the trail drops to a lower part of the plateau we encounter the sign. I stop, look and think for just a second or two before heading off in the direction indicated. Fog temporarily obscures the land, hiding then revealing it like some magician giving revealing a trick. In a similar way, the mental fog lifts to reveal in my mind’s eye a glimpse of the past when, now decades ago, I had come this way.

I don’t recall the route we took to get here then, to this rock we now stand in front of, but it was probably up the Zig Zag Track, then a less-well-maintained and rougher approach. The past rushes past me in that moment and I recall an image someone made of the group who were here then. It must have been made on my camera because I recall that, somewhere at home, I still have it… people dressed in the red checked woollen shirts favoured by bushwalkers and outdoor types standing atop the rocking stone and around its base.

Photo: The rocking stone, some time during the 1970s.

As happens in those moments I wonder what has become of them. Of those standing atop the rocking stone there was Alex Skelenika, the man with the hat, a middle-European emigre and World War Two guerrilla who was then living on the side of Mt Wellington in the village of Fern Tree. He’s no longer with us. Next to him, Sunflower peers at the camera. That was what he was called and I no longer remember his name (did I ever know it?) nor what became of him. The third man is Ian Wright with whom I worked in Hobart, far down below Mt Wellington, in the adventure equipment industry. I believe he still lives in Hobart although I’m far from certain of that. Sitting below Ian, long blonde hair tied back, is Charmaine Gibson, for some time a Launceston criminal lawyer, now with her own practice. And standing below Charmaine, hands on hips, is the author of this story. As for the others, I don’t recall their names. They each have gone on their own ways in life.

We don’t stay at the rocking stone all that long on this, my return. The fog is coming and going, the weather getting cool and lower altitudes are calling. As we leave I look back on what has been two visits to the rocking stone, two visits separated by decades.

It is over six months later, at home in Sydney, that I rediscover that photo from the seventies and get inspired to sit down one cool, cloudy day in the first week of winter when the weather was somehow reminiscent of what you find on the Mt Wellington summit plateau, and tap out these unplanned words. And it is then that the words of an old Joan Baez song came into my head… something about memories tumbling like sweets from a jar… and the winds of the old days blowing through your hair.