A Tasmanian journeyNomadics
No Comments 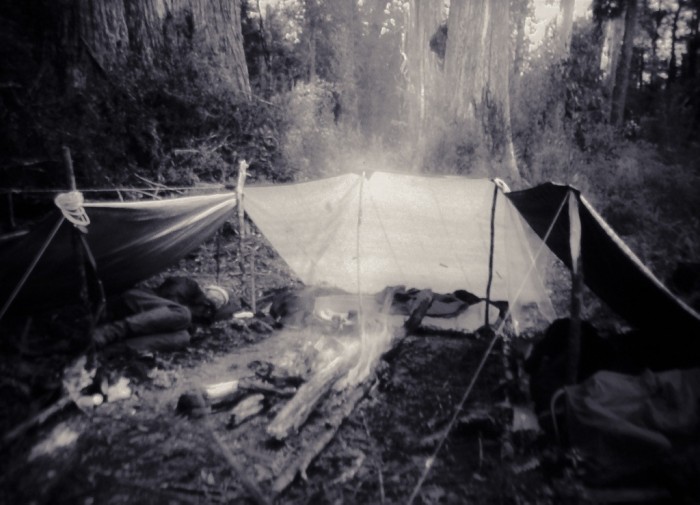 A SLEEPER CURLS UP SEEKING WARMTH in an overnight camp in the wet eucalypt forests of the Picton in south east Tasmania.

I don’t recall whether it was evening or early next morning that I made this photograph, probably on my Canon FTB camera – a film camera, that is (this was way, way before digital cameras) that I used at that time, some time in the 1970s when I lived on the island, that is.

The trouble with those wood fires like that in the photo is that they warm the side of you facing them while your other side freezes. Turn over seeking to even out the sensation and you merely repeat it in reverse. And so it goes through the night.

We had set out on a training trip into the forest to hone our survival skills under the leadership of an older man who had honed his survival skills as a guerrilla fighter in the former Yugoslavia during the Second World War. One of our learnings was that, when you overnight below a tarp and without sleeping bags, it’s always someone’s job to rouse themselves, or someone else, to stoke the fire, though that usually happens anyway when the fire dies down and the cold starts to get to you.

Tarp-as-shelter also figured around that time when our remote areas fire fighting unit — we were called ‘smokewalkers’ — was dropped off by jetboat in the cool temperate rainforest along South West Tasmania’s Gordon River for a nearly a week of firefighting. We brought a big tarp with us for accommodation well as some jaffle makers and we learned to like… not sure that’s the right word… jaffles made of stale white bread (all that we could find in Strahan) and army food (we were supplied with ten person/day boxes of the canned stuff).

I slept under an open shelter like those in the photo — a military tarp called a ‘hoochie’ — in the Blue Mountains when I worked assisting training on a TAFE course on outdoor guiding. Just a groundsheet below and the hoochie above, tied to trees. Basic accommodation for sure, but quite comfortable.

Internships in permaculture — exploitation or opportunity?