From mountain to museum 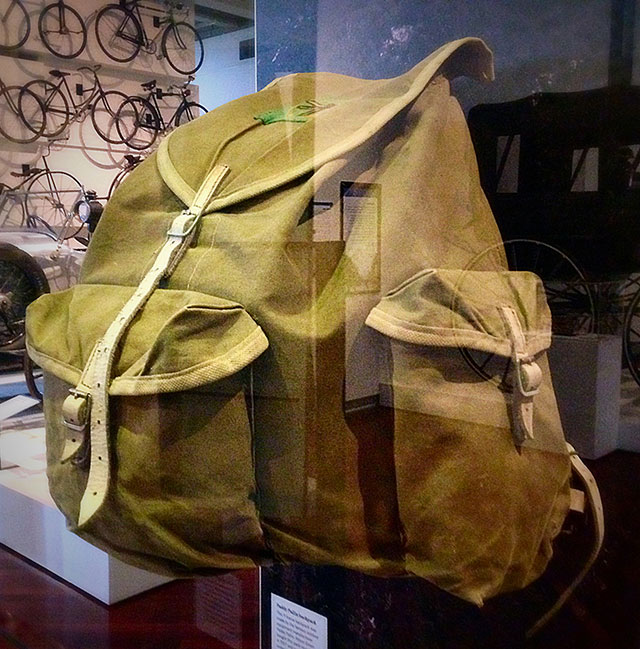 OLD KIT doesn’t die, it goes to the museum.

I made these photos at Launceston’s Queen Victoria Museum and Art Gallery at Inveresk last week. They show some of the artefacts used by a Tasmanian Bushwalker of the 1960s and 1970s. Coming across the display cabinet I was reminded of those years, the years I moved to Tasmania and started bushwalking in a serious way. The seventies was the decade when bushwalking started to take off in the state. Hardy people, men and women, had been bushwalking for decades before, but that decade brought bushwalking to a new, numerous generation.

The pack in the Museum carries the embroidered insignia of the Hobart Waking Club. Founded at the end of the 1920s, the club continues today, more a Tasmanian institution than a group of friends out for a weekend in the mountains.

Paddy Pallin was the most popular brand of pack at the time. The packs were made in Sydney by the company Paddy established in the 1930s. The South Australian pack, Flinders Ranges, later became popular. It was another canvas, H-frame model, yellow canvas. I never used one but I doubt its carrying comfort was any better than Paddy’s. From New Zealand came another pack of the type called the Mountain Mule. This was a large capacity pack, canvas, tough, the next thing to inderstuctable you could find, but no improvement in carrying comfort than others of the H-frame variety. It’s name aptly described how you would feel carrying it fully loaded. When something is an improvement over what came before, and when there is nothing new in sight, then you don’t know that there could be better ways to carry your load in the hills. That would come later in the decade with the internal frame pack.

In the mid-seventies the adventure equipment shop I worked in introduced the internal frame pack to Tasmania — first, Berghaus, then Lowe Alpine Systems. These definitely were more comfortable and lighter weight, being made of nylon, and a Berghaus, then a Lowe, quickly replaced my own H-frame. The shop also introduced the first synthetic fleece and GoreTex waterproof clothing.

The A-frame, though, was the pack carried by the pioneers of bushwalking in Tasmania and it’s fitting that it has a place here, in the Museum. It is also fitting that the Museum commemorates an activity that has a long history on the island and that is linked to pioneers of the wild country like adventurer and explorer, Olegas Truchanas and landscape/wilderness photographer, Peter Dombrovskis.

These we sold at Outdoor Equipment and they were what bushwalkers favoured. That has much to do with the usually vain attempts to keep our feet warm when it rained in the mountains. Then, walking tracks became waterways and there was little you could do to keep the water from flowing in through the top of your Blundstone boots. Wet, cold feet were an accepted part of mountain walking and a pair of those thick oily and sooner rather than later soggy wool socks went a long way to retaining a semblance of warmth for your wet, wrinkled feet.

I made use of a Canon FTB in the bush and elsewhere, a similar camera of similar construction. Later, I adopted a lightweight Olympus OM, which became available late in the 1970s and offered definite weight and space saving. It’s inevitable, in an economic sense, that new industries rise to cater to new demands like the emerging bushwalking equipment market at the time.

Hobart bushwalkers would buy their equipment and clothing needs, including the ubiquitous Tasmanian made woollen shirt from Waverley Woollen Mills in Launceston, from the Scout Shop or from Tradewear before the first specialist bushwalking shop opened in the city in the mid-1970s. There wasn’t all that great a choice for bushwalkers then. Almost universally, they used black, oiled japara cotton waterproofs (japara is a fine-weave cotton cloth), checked woollen shirts and Blundstone boots .

That first specialist adventure sports retailer in Hobart — Outdoor Equipment — was opened by the man who bought Tradewear. He was local businessman, John Oldmeadow. John also opened a military surplus shop in Murray Street, below where Sustainable Living Tasmania now has its office. He wasn’t impressed when the new manager had his business card printed identifying him as an ‘arms dealer’. A new card was hastily made.

John Oldmeadow hired Ian Wright, who was active with the Hobart Walking Club, to manage Outdoor Equipment and, later, hired Reg Morrow, a big wall climber with his bushy Afro hair style from Victoria to look after the climbing equipment. I, too, was hired. Reg’s younger brother worked at Outdoor Equipment and I recall, not long before Christmas one year, John Oldmeadow complaining that most of the bicycles he had bought to sell had been purchased by staff, including by the two brothers. Reg later became a Launceston magistrate.

As bushwalking grew more popular in the seventies, Outdoor equipment opened a smaller shop in a renovated building in Charles Street, Launceston. On learning of the imminent arrival of the Outdoor Shop in town, Allgoods, an established clothing and tent retailer, opened its own bushwalking shop so that the Outdoor Shop, as the Launceston store was called, didn’t have the spacialist bushwalking market all to itself. At the time there was an established, small retailer along the Bass Strait coast in Devonport but I no longer recall it or its proprietor’s name.

Allgood’s shop is still there though on my recent visit I thought it looked a little crammed and tired. It has been joined in recent years by the big mainland retailers — Paddy Pallin, Macpac, Kathmandu, Mountain Designs.

Launceston’s Outdoor Shop closed at the end of the 1970s. I was managing it then, though not the financial side of the business. My belief — I was never supplied with any detailed reason apart from a drop-off in sales — is that its closure was due to a limited market shared with Allgoods and to the proprietors buying stock more suited to vehicle camping rather than the store’s strong point, adventure sports like bushwalking, cross country skiing, climbing and canoeing.

Those activities were what brought the clientele into the store, but stocking lines that had a limited market for the adventure sports crowd and that, as with larger tents, competed with Allgoods with its large display space, drew capital away from the specialist lines into a market the Launceston shop was ill-equipped to participate in. The values of specialisation and developing a specialised market in the backpacking and adventure sports were not fully recognised.

In the period leading up to closure sales had fallen off although the shop still had a steady clientele from Launceston and other cities along the Bass Strait coast. I don’t know why sales declined and I don’t recall details of the economic conditions then and how they were affecting the city of 65,000. I do recall, however, that economic change was starting to affect established Launceston industries and that there was concern over the future of the city at that time.

Sales followed a seasonal pattern as is common to the industry, with the warmer months the busiest. Winters were sustained by catering to the city’s growing number of cross-country skiers, then a sport new to Tasmania, and sales of the new synthetic fleece clothing’s well as continuing to cater to the established market for wool clothing.

A new clientele now started to appear — people buying inflatable dinghies that we called ‘rubber duckies’ for trips down the Franklin and Gordon rivers. That would feed into the successful campaign to save the Franklin from flooding for a hydroelectric scheme.

At the Launceston shop we made a point of stocking new equipment such as the Berghaus and Lowe internal frame packs, and the proprietor, John Oldmeadow, had at one time an informal arrangement with the importer of Berghaus products in Melbourne to supply only the Outdoor Shop in Launceston. Allgoods were not at all happy with this arrangement.

One of the best parts of the job was going away with Reg in the shop’s Kombi to do displays and talks for schools and clubs. Reg drove with a velocity that would today land him in front of a magistrate, rather than his becoming one.

The adventure sports industry is no longer the provence of those small, local and independent retailers that it was at the time of its emergence in the 1970s. Today, it is largely the property of large, national retail chains and international manufacturers.

A new market was partially responsible for this. Equipped with Tony Wheeler’s Across Asia on the Cheap — the title that gave birth to the Lonely Planet publishing company — this new market first appeared in the 1970s when it was the provence of the hardy few. Then, they made their way across the world’s backblocks without a local hospitality industry waiting to accommodate and feed them.

My first encounter with adventure travel was while living in Hobart when I was invited by local bushwalker and member of the Hobart Waking Club, Adrian Jarret, to watch a slide show of his trek in Nepal. Overland travellers following the Hippy Trial, London to India and for some on through South East Asia to Australia, had discovered Nepal in the late 1960s. The emerging adventure travel industry had brought a new milieu to the country by the beginning of the 1980s.

It took the arrival of cheap international airfairs to give this market and those manufacturers and retailers catering to it the boost that ended in the domination of the Australian adventure equiment market by the big four — Paddy Pallin, Macpac, Kathmandu and Mountain Designs. There are other retailers, of course, but they are small and local. Anaconda is a chain that more recently entered the outdoors market, however it does not have the adventure sports background or reputation of its more established competitors, nor does it specialise in the high quality, more expensive lines.

At the Outdoor Shop we saw this new adveture travel market coming and soon started to stock the clothing and equipment that it demanded. That market grew and is today what is called a ‘mature market’.

One thing that’s changed for the better over the years is that bushwalking equipment became lighter in weight and more compact, largely thanks to new synthetic materials. Gone are those chunky, heavy boots, those weighty packs. You can now go bush and walk along less bent-over from the weight of your chunky, inelegant canvas H-frame pack loaded with cotton-covered sleeping bag and heavy japara cotton tent.

In Tasmania, the popularity and government promotion of adventure sports like bushwalking sustains the market.

That’s why, standing there in front of that display cabinet of old bushwalking equipment in the Queen Victoria Museum, I was taken back to the days when bushwalking was for the hardy and their equipment had to be just as tough as they were.

The household solution — too small to push change?

The household economy: time for reimagining?