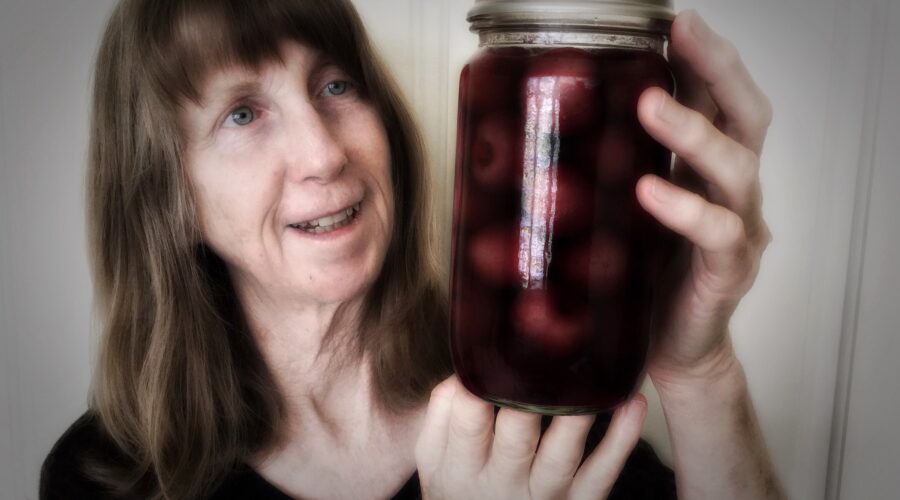 The household economy: time for reimagining?

I KNEW WHAT WAS HAPPENING when she got the big drum out from the back of the cupboard.

“I”m going to bottle those cherries we got yesterday”, Fiona said. “So I’m cleaning up the kitchen first to make space. Let’s get that stuff out of the drying rack and those utensils off the stove”.

I should have known this was coming when she walked in with a box under her arm. A box of cherries, that is. Whenever I see Fiona carrying a box of fruit of some kind I know that our tiny kitchen is soon to become a small-scale industrial processing facility for preserving and bottling. I guess it’s her way of hacking the industrial food preserving industry.

Our tiny apartment kitchen doesn’t have much space for this sort of thing, just enough to get by. It was soon covered with glass jars, metal lids and red rubber gaskets that seal the jars under those lids.
But… “where are the three missing jars that go with these lids”, Fiona asked as she held aloft the jarless lids. She looked around. “There they are on top of the cupboard… and they’re full of wine bottle corks that you’ve filled them with!”, she said, looking at me accusingly. I think those corks are now destined for recycling.

THE HOUSEHOLD ECONOMY — STILL ACHIEVABLE?
Whenever I see this happening I’m reminded of a workshop Su Dennet, David Holmgren’s partner, did at the 2007 Australian City Farms & Community Gardens Network (communitygarden.org.au/) conference in Melbourne. It was on the domestic economy.

Thus it made sense to me that, in 2013, Su was recognised as a ‘role model for women choosing a home and community based lifestyle as an empowering and effective way to contribute to a better world’, according to the story linked here: holmgren.com.au/su-dennet-honour-roll

The notion of the domestic economy is one traditional to Australian society and to other societies too. It puts the home at centre place and incorporates all of the varied activities that go to feeding the occupants, fuelling the building, the skills of maintaining it and its water supply, solving the problems occupants experience and maintaining the convivial experience of living in family, whatever your interpretation of that word.

Sue, living at her and David’s smallhollding on the edge of a central Victorian town, has her own vegetable garden—not one of those convoluted permaculture designs with wavy lines and crenellations (and thus with considerable maintenance requirements)—but a conventionally-shaped array of raised, rectangular beds (thus demonstrating the value of simple, effective, low-maintenance design). That makes living garden-to-kitchen easier and supports the fresh food component of the domestic economy.

NOT SOMETHING EVERYWHERE AVAILABLE
This, though, is something not available everywhere. A growing number of Australians don’t have a garden because they live in apartments, town houses and duplexes with small to zero growing space. Even had they gardening space, many wouldn’t have the time to garden because of the pressures of their working lives. Time poverty can be a brake on developing a fully-functioning domestic economy. I wondered whether Su’s notion of the domestic economy was relevant to all that many city people — the majority of our population in this country.

When it comes to food, if we swap the home kitchen garden for the community garden (noting that many community gardeners do not grow sufficient food to supply a significant portion of the family diet — due to a lack of knowledge, ineffective plant choice and small allotment size) or replace it with the local food co-op or CSA (community supported agriculture enterprise — if one is available), then an urban domestic economy might be achievable but only by linking it into the urban food supply chain. That takes the urban domestic economy beyond the individual household and links it to economic enterprises and to other people.

There’s another factor holding back the practice of the domestic economy in our larger cities, however. It’s home ownership. While rental property owners might or might not let residents make a vegetable garden, there’s no incentive to plant longer-term crops like fruit trees because by the time they mature the residents might have moved on, and there’s no guarantee that the new tenants will be interested in maintaining the trees. Nor is there incentive to install energy and water conserving technologies other than efficient lightbulbs and tap aerators.

For large numbers of young people, owning a home in a city where their work skills are in demand—that usually means one of Australia’s capital cities or larger regional centres—is simply unaffordable and this, too, acts against the development of a domestic economy at the scale of the individual household. Perhaps we need to invent a compact, mobile version of the domestic economy, a model for apartment dwellers and those who don’t own their own home or apartment (there’s a project for someone).

NOT EVERYWHERE APPLICABLE
The difficulty of developing a domestic economy in densely-populated cities, the model common in permaculture, anyway, is evidence that permaculture could do with more nuanced ideas that are adaptable rather than propose one single model for all. It could do with less the individual suburban house as the focus of design and more the urban apartment. I don’t believe true what one permaculture practitioner told me when I questioned the relevance of permaculture to people living in medium and high density dwellings” “Oh, well, maybe permaculture’s not for them”.

I acknowledge that some in permaculture and some teaching the design system do what I am getting at here, however when you look at popular expressions of permaculture, especially on social media, it’s that old model based on ownership of a detached suburban house that predominates.

I made these observations while working with community food growing and food systems for a local government administering the central business district and surrounding areas of dense population. There was too little open space for community gardens and all the other uses of open space that contribute to people’s mental health and recreation. Those gardens we helped people instigate were characteristiucally small and came about sometimes with opposition from locals—the curse of NIMBYism again.

I also saw that some citizens imagined solutions at that municipal scale that I mentioned, however, but unfortunately, they seldon numbered permaculture designers in their cohort. It seemed permaculture practitioners, when they conceived of something larger than the domestic scale, stopped at the scale of small community food gardens.

BOTTLING WHILE CHEAP
We had been here before… bottling fruit while it was at the peak of its season and cheap. That was last year when Fiona bottled nectarines that we bought from Sydney Food Connect, the CSA (community supported agriculture). This year it’s juicy cherries from NSW.

Six bottles, she calculated… we should get six bottles from the box of cherries. Alas, it was not to be. Five bottles was all we got. And as for the missing sixth? Well, that could be accounted for be the quantity that didn’t make it to the bottling session. We ate those fresh.