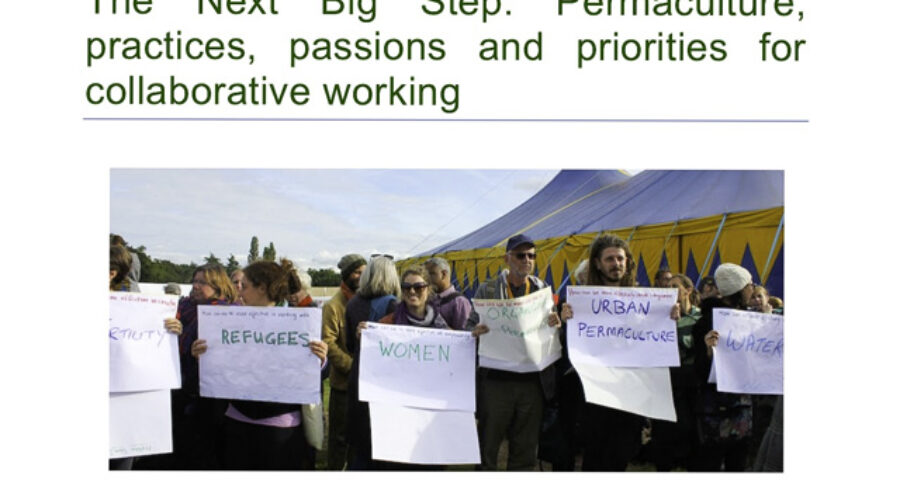 THE FIRST AND ONLY GLOBAL SURVEY of the permaculture design movement paints a picture of a substantial movement with a rough gender balance that is practiced mainly by people over 25 years of age. The survey circulated mainly in more developed countries.

Entitled The Next Big Step: Permaculture, practices, passions and priorities for collaborative working, the analysis reports data collected between June 2015 and July 2016. It was released by Permaculture Association UK in June 2017.

The survey replaces assumptions made about permaculture, some based on local observation and true in their region, with objective information about the movement as a whole. This is important because permaculture lacks knowledge of itself. Over the years its practitioners have said that there is a lack of information about how permaculture is practiced, by whom and where.

Statistics and narrative information that would enable us to track the spread, content, practices and scale of permaculture practice in different countries is missing, largely because there has been no organisation with the global reach to survey and compile it. Without reliable information there is only assumption. An example is the claim that permaculture is practiced in around 130 countries and participation may be as high as three million. Another claim, made on a radio program by Geoff Lawton of the Permaculture Research Institute, is that permaculture is practiced in every country in the world. The problem with these types of claims is that they are made without reliable evidence.

If we accept this then any researched information about how the design system is practiced internationally, such as that offered by The Next Big Step: Permaculture, practices, passions and priorities for collaborative working is useful. It is the only factual basis we have about permaculture practice in different countries.

A few years ago Permaculture Australia surveyed its members to gain an idea of who they are and what their aspirations and needs might be. It was the first substantive survey in Australia since the launch of the permaculture design system in 1978. Organisations like Permaculture Australia need such information to base their services on. Permaculture educators can use the data to structure their courses and identify potential students.

Between June 2015 and July 2016, the online survey was distributed in English, French and German to individual practitioners over 18 years of age and selected permaculture organisations at “the highest strategic level of organisation in each country”. A total of 451 responses from 36 countries were received.

Of the 399 respondents who gave a country, the data reveals they are based in:

The top three countries were:

Next Big Step qualified the geographic distribution by saying:

“Latin America was significantly underrepresented (largely due to issues with translation to Spanish), as were Asia and the Middle East. A greater number of people from Africa responded but the majority were from Europe, Oceania, and North America and tended to be English speaking.”

Among the findings of the global survey of permaculture practice are:

Fewer younger people in permaculture raises questions. Is there something about the design system that is of less interest to that 16-25 age bracket? Does the reach of permaculture organisations and educators fail to extend to that group? Does it have something to do with growing up and the interests that arise in that phase of life? Is what permaculture focuses on not seen as priorities by the age group?

There has been discussion about gender representation in permaculture social media, with some claiming that women are underrepresented while others have said they are more or less equally represented. Further discussion suggests that both claims could be true if the claim is restricted to the region where the claimant lives. The true number of males and females in the permaculture milieu in Australia remains an estimate based on region and personal observation.

The Next Big Step international survey points to an approximate gender equivalence, with women comprising 52.3 percent of respondents and men 46.3 percent. A total of 1.4 percent selected a different identity.

In the 36 to 45 age bracket women had a smaller majority. In the 46 to 55 age bracket they made up almost 60 percent of respondents. Other than that, nowhere is there any significant difference between male and female numbers with the exception of the 16 to 20 age bracket where male respondents numbered around two to three percent of the total.

How precisely respondent figures translate to the entire global permaculture population is unknown. The survey, which the Next Big Step has described as a “snapshot”, might not have been a large enough sample to be representative. It is all we have to go on, however.

Who are permaculture practitioners? The survey discloses they are:

The high number of permaculture practitioners with higher-level educational qualifications suggests there may be truth in comments that permaculture appeals mainly to a middle class demographic. That is if educational achievement is accepted as an indicator of social class. The reduction in traditional working class numbers due to economic and industrial change and automation in technologically advanced countries may have some role in boosting the preponderance of middle class people in permaculture.

The finding could be taken as evidence that permaculture is a technology of the more affluent rather than lower-income demographics, and that resources such as higher income and home ownership are prerequisites to practicing permaculture. This comment is made on social media.

The survey asked what respondents what they think should be the  priorities of the permaculture design system. Comments recognised that permaculture carries different meanings for different people, which, according to Next Big Step, “gives both value and limitation to its effectiveness.”

Responses to the question about what should be the priorities of the permaculture design system included:

The questions on how to achieve these priorities brought a range of responses:

Asked about research in permaculture, the main priority was “provide reliable evidence for effective permaculture practices and approaches”. This suggests that building a strong evidence base to improve the credibility of permaculture is a priority among respondents.

This gets back to what ex-NASA scientist, then-head of the Context Institute in the USA, Dr Robert Gilman, told Australian permaculture practitioners in 1995. Robert said permaculture needs publicly-accessible demonstration sites where people can come to see permaculture in action and see that it offers viable solutions. We now have places that do this, however the response to the question in the survey suggests these are too few or too under-publicised.

The response about providing evidence was reiterated by applicants for Permaculture CoLab stewards positions during interviews in October 2017, in which I was one of the interviewers. A significant number of applicants said permaculture needs to demonstrate that its solutions actually work and that better communications between permaculture organisations is needed.

The vexed question of permaculture education

Options for standardising the PDC and teacher training curriculums were polarising with comments, NBS reports, “recognising both the value and the limitations of this approach.”

Several comments suggested establishing a basic minimum standard for courses and support for permaculture educators. Others suggested supporting teachers to “develop effective approaches and helping them to connect with potential students would be of benefit.”

The question of PDC content and structure has been disputed in Australia. There has been discussion around whether the PDC content and structure established by the Permaculture Institute (created by Bill Mollison at the start of the 1980s and through which early PDCs were offered) is the only valid design course curriculum. Those supporting this model say the chapter arrangement and content of Bill Mollison’s 1988 book, Permaculture — A Designers’ Manual, is the only valid model for the curriculum. Others proposed a more flexible structure and content, some adopting permaculture educator and international development worker, Rosemary Morrow’s The Earth Keepers Guide to Permaculture as a course handbook. They claimed its structure, language and tone makes it a more accessible source of information.

Gaining global agreement on permaculture course content is a probably-impossible task. Strong opinions abound. Additional to any conversation around permaculture education is the existence of officially-recognised permaculture courses such as Australia’s Accredited Permaculture Training that can be offered by private tertiary education providers and TAFE colleges. It is situated within the national training scheme as workplace training. Now, Central Queensland University offers a masters degree in permaculture design.

Gaining agreement on core content for the permaculture design certificate, the community level course, may be doable, but getting educators to adopt it might be the challenge.

Summarising the findings, Next Big Step suggests where effort could be focused to create global coherence in permaculture:

Some might question the validity of a document that lacks substantive input from non-English-speaking permaculture practitioners. This is a reality the organisers acknowledge. But anyone with experience in unfunded or poorly-funded community associations will know that limited resources define what they can accomplish. Although some are likely to criticise the survey, it is all we have, the only objective information of how permaculture is practiced, where it it practiced and by whom. Incomplete this may be, it is better than nothing.

This is an information-rich document for an information-poor social movement. Despite its limitations it holds a mirror to permaculture practice through which we can gaze to see what it looks like. The document details the survey findings and is worthwhile reading for those interested in permaculture’s trajectory in the world and how it is perceived.

MORE READING: Investigating priorities for The Next Big Step for Permaculture was a session at Australasian Permaculture Convergence 13 in Perth in 2016.