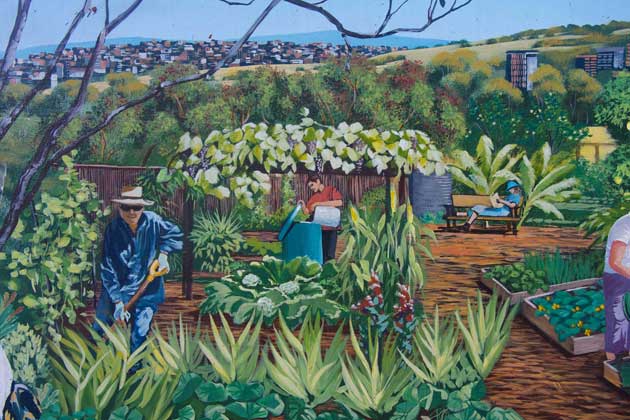 HOW DO YOU EXPLAIN where we are in history and how we got here? How do you tell the story of the Anthropocene in a Living Smart course? That was my challenge as I poured a cup of steaming, brewed coffee and sat down to think it through.

What I ended up with was a lesson plan in the form of a flowchart. I wanted to explain the Anthropocene as a story unfolding over time, as a tale of how the demands of a growing population and rapid industrialisation took us from the slower pace of pre-industrial life to the hectic pace of hyper-industrialisation. That how we got here is not due to random events or the machinations of governments or corporations but is the result of a trend that started over 200 years ago and that picked up pace around 65 years ago. 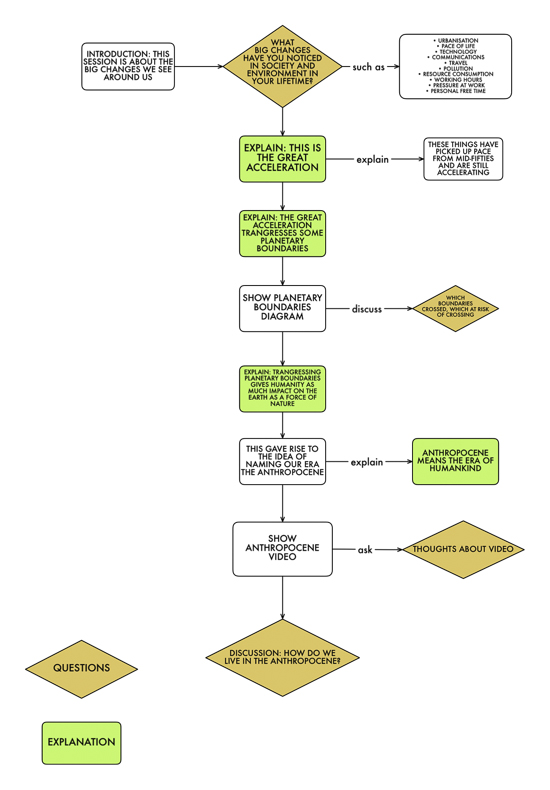 The Anthropocene is a new name that situates our present age in Earth history. That history is based on geological/envirionmental conditions and is catagorised into:

Or do we still live in the Holocene? Earth scientists say that we have now entered a new geological age. They show evidence that human influence on geology, the oceans and the climate is now so substantial that a name change to Anthropocene is warranted. Anthropocene means ‘the age of humanity’. Humans, that is, have become as powerful an influence on earth systems as a force of nature.

Those who study it say that we can trace the Anthropocene back to the start of the Industrial Revolution. They link our acceleration into the Anthropocene to the emergence of consumer economies, their hunger for natural resources and production of wastes.

How did we get here?

How do I explain this to the class?

Wanting to context the emergence of the Anthropocene in modern times, I made a flowchart as a lesson plan to lead course participants from the start of the consumer economy in the mid-1950s or thereabouts, to now. That period is the time in which human impact grew substantially.

The productive capacity of industrialised countries was boosted by the increased production demanded by World War Two. After the war, as countries started to rebuild peacetime economies, there was the question of what to do with this increased productive capacity. Instead of making war machines it was turned to the mass production of consumer products.

New production technologies and processes made those products cheaper. Economic growth and rising incomes, initially in Western countries but now spread globally, made them affordable. Consumerism stepped up from a sluggish stroll to a slow jog. By the 1980s and the arrival of computerisation in the more developed economies, that slow jog moved into a rapid sprint. Things were speeding up.

I asked the class whether they believe things have accelerated over their lifetimes. If, so, what has accelerated? This took the form of a brainstorming session and, following that, a little time spent in discussing some of the ideas listed.

I asked this question in a couple earlier courses and this is what participants said they believed has accelerated since the mid-1950s or thereabouts:

Taken together and with other things added, this speeding-up is known as the Great Acceleration.

The Great Acceleration refers to the most recent period of the Anthropocene during which the rate of impact of human activity upon the Earth’s geology and ecosystems is increasing significantly. While the Anthropocene commenced with Industrial Revolution if not long before, the Great Acceleration begins in the 20th century with the acceleration rate dramatically increasing after the Second World War. This concept has been further extended to refer to the rate of change in technology and society as a whole.
…Wikipedia

Its increasing consumption of resources, production of wastes, climatic and other effects produces such a substantial impact on earth systems like the atmosphere, the oceans, global ice coverage, soils, geology (such as earth removal through mining and construction), vegetative cover, changes to ecosystems and biomes, that the Great Acceleration has pushed us across some of the planetary boundaries within which lies the safe operating space our species co-evolved with during the Holocene.

How does this work? To explain this I used a diagram of the planetary boundaries from the Stockholm Resilience Centre, University of Stockholm: 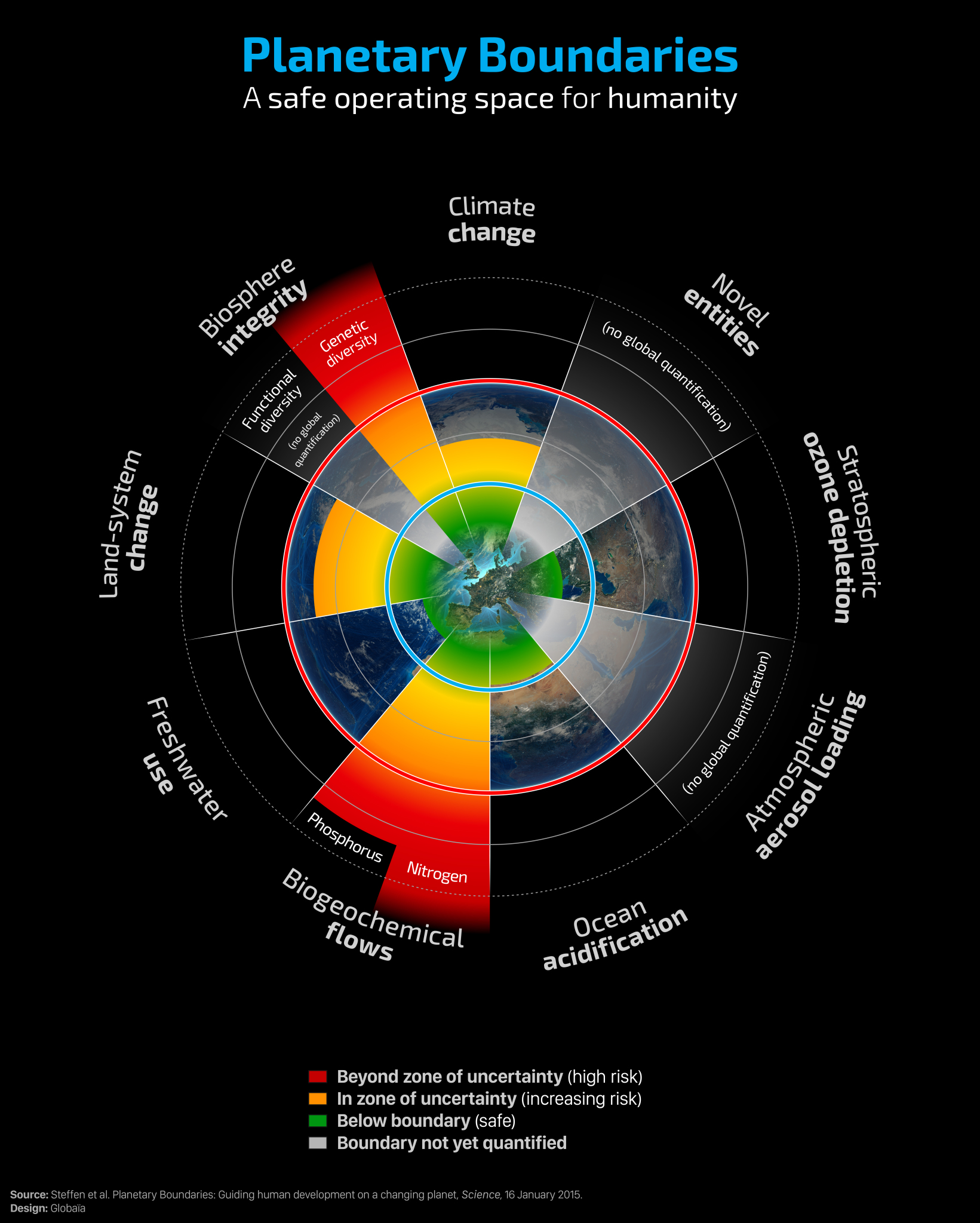 I discussed how the Great Acceleration led to humanity altering some of the Earth’s natural cycles and pushed us over some of the planetary boundaries such as biodiversity, the nitrogen and phosphorus geochemical cycles (thanks to fertilisers) and that climate and land system change are now in the danger zone of increasing risk. Global environmental boundaries include oceanic acidification and its effects on the marine life on which many coastal peoples rely for their livelihood.

Transcending the planetary boundaries accelerates us into the Anthropocene.

To explore how the Great Acceleration leads us into the Anthropocene, I made use of the Apple Tree model of:

For the ‘reinforcement’ phase I used a 3’38” video on Vimeo explaining the Anthropocene.

Having gone through how the Great Acceleration led to transgressing planetary boundaries and how it is taking us into the Anthropocene, it was time for the ‘sell’ phase of the Apple Tree model. This is the phase in which I summarise by referring to the explanatory and reinforcement phases. It leads into a discussion of potential solutions at both the socio-economic and the household level.

For this, I chose two focus questions:

The format for this part was conversation between participants in small groups.

The only safe operating space we know of is that in which humanity evolved — the conditions of the Holocene. Now, our challenge is to influence earth system conditions in the new age of the Anthropocene so that we can create a new safe operating space. This calls for adaptation to changing conditions as well as to taking those measures that would, over time, ameliorate the effects of a changing climate and the Great Acceleration.

In this part there is opportunity to introduce the ethics and some of the principles from the permaculture design system. The idea is to offer participants a framework for living and decision making. It is also the opportunity to talk about behavioural change, which is a theme of the Living Smart course.

The idea of presenting the Great Acceleration and the Anthropocene in the Living Smart course is to make more comprehensible the big picture trends shaping the world today, and to show that how we got to where we are now was the result of a process rather than of random events.

Tracking the Great Acceleration from the start of mass consumer culture in the mid-1950s to present times and contexting environmental, social and economic change within that leads to the consideration of potential solutions local, national and global. To personalise solutions and scale them to what individuals in their households and communities can do is what the Living Smart course is all about.