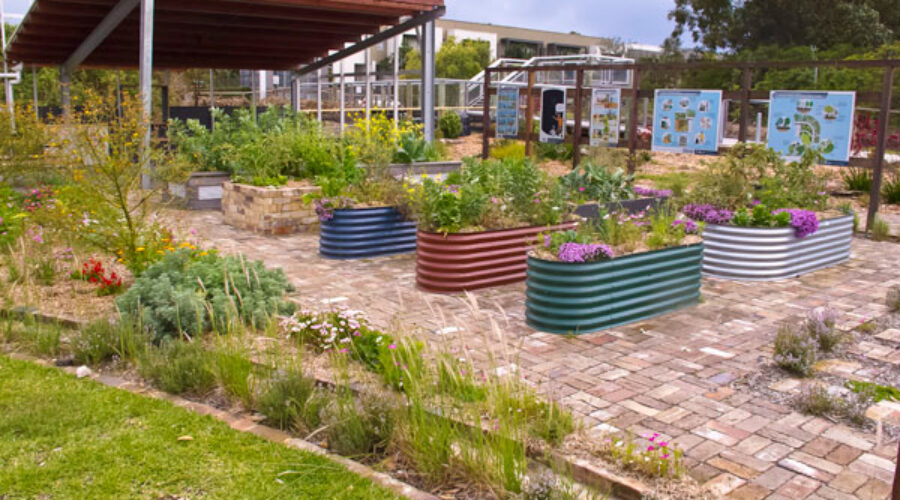 THE INTERESTING and long-running conversation of what permaculture practitioners and educators should focus their efforts on has come up again, this time in a Facebook conversation.

Chris Watkins started it when he wrote that the suburban garden is the focus of most permaculture practitioners in the US. Had he added that the same is true of Australian permaculturists, he would have sprouted a truism. The conversation reminded me of a publication on city permaculture that I acquired not all that long ago. Sure, it was an interesting publication and it showed that there exists a diversity of innovation by permaculture practitioners in our cities, but—to reiterate Chris’ statement—it was all about suburban gardening and the household. Not much about any broader application of permaculture principles or ideas beyond the home garden gate.

That’s where Mitra Ardron came in. Mitra has long been an in-principle supporter of permaculture but sees the design system as being hamstrung by an inability to scale-up to achieve either greater numbers of practitioners or some larger, societal-scale impact. He wrote that permaculture will become “seriously relevant”  and have significant impact  when it becomes “either cost effective on decent size farms or can convince significant numbers of urban dwellers to spend a substantial portion of their free time in their gardens”.

This is not the first time Mitra has sounded off on the topic of scaling-up… and it’s not hot air because Mitra knows scaling-up quite well, having been the instigator of a solar energy bulk but program when he lived in Byron Bay. I guess you would call him a social entrepreneur, probably a small business entrepreneur too, so he knows how to make things happen. I first encountered Mitra’s constructive critique of permaculture a few years ago when he wrote on it on an online discussion.

On Facebook, Mitra suggested that it might be the mindset of permaculture practitioners that is the biggest barrier to the further penetration of their ideas into society. Few, he said, think on a scale beyond the suburban backyard; few think of scaling-up their work.

This is not entirely true and I’m sure Mitra would be the first to acknowledge the work of those practitioners who have attempted to take the ideas of the design system to a larger milieu.

Community gardening will not by itself feed our cities, yet it is at the critical crossover of home and community gardening and urban food security that the question of how we feed the growing urban populations that permacutlure becomes less visible. Why? Because urban food resilience is not only about growing food. It’s about educating and advocating about it. When you look at lobbies like the Sydney Food Fairness Alliance you find only one person openly identifying as being involved in permaculture though there is another on the organising team who has a long-established permaculture background, however her participation represents another organisations (not being a member of a permaculture association). This is how she practices her permaculture and it’s just as valid as those who find it necessary to be a member of an association.

I could say that it’s much the same in the leadership of the Australian Food Sovereignty Alliance, however it’s not—there are even fewer actively identifying themselves with the ‘permaculture’ label. These instances can be seen as particular examples of permaculture’s non-engagement with initiatives that could scale-up its work, and it gets back to what Mitra says about permaculture’s focus.

Mitra’s assertion that permaculture’s future will be limited unless it can scale-up its application might be true, but let’s create a little perspective by pointing out that some with permaculture backgrounds are doing what is in their power to scale-up the work of the design system. For example, there’s the work of TerraCircle Inc in international development in the South Pacific, Steve Batley with his landscape design business—Sydney Organic Gardens, Julian Lee with Sydney Food Connect, sustainability educator Fiona Campbell with her Living Smart course and  the Sustainability Education Hub she is project managing for the council she works for. They’re all  in Sydney, but interstate there are people like Claire and Jeremy Nettle, in Adelaide, who have taken their involvement with permaculture and scaled it up to influence a greater number of people and institutions, for example through the Urban Orchard food swaps and the Plains to Plate Future of Food conference and wiki. Then, in Tasmania, there’s Hannah Moloney and her involvement with the combined food production garden/food co-operative centre known as The Source that she has had a leading hand in.

What se people have done is commensurate with permaculture having gone through the early adopter phase of ideas diffusion and entered the early mass adaption phase. Interestingly, none find it necessary to brand what they do as ‘permaculture’. What they do is apply the principles of the deign system to their work, not shout out the word as if on some corporate branding mission.

Not all of these are on the scale Mirta talks about, however I see the efforts of these people and organisations as being of a scale approximating where permaculture’s place on the ideas diffusion curve is at present. Where Mitra’s comments are relevant is over the design system’s coming phase as it moves further into early mass adoption—just how big will that ‘mass adoption’ be and how can permaculture reposition itself in the social marketplace for ideas so that it can be scaled-up as a mass adoption? As Mitra suggests, much rests upon how permaculture is framed by its practitioners and educators.

Scaling-up calls for a municipal focus

Why I say this is because one of the projects I am involved with in my local government work is the Sustainable Streets-Sustainable Communities Demonstration Project in inner urban Chippendale. The project is developing a precinct to demonstrate sustainable urban solutions such as street verge gardens, rainwater harvesting and storage to irrigate a park, community composting, an energy and water efficient terrace house retrofit, the nearby Chippendale Fresh Food Co-op, street trees as urban canopy and to reduce the urban heat island effect, heat reflecting road surfaces and more. Sounds like the sort of project where you would find permaculture, doesn’t it? And permaculture people are conspicuous… by their absence. It’s local people with a keen interest in the urban environment and civic affairs who are leading the Sustainable Streets project.

Why aren’t permaculture people involved? Do none live locally? At the public launch event and the subsequent series of four workshops held to harvest the ideas of local people for the precinct (gardens and compost; water; transport; energy), I recall hearing the ‘P’ word—permaculture—uttered only once, and that was in passing. Yet, permaculture associations visit Michael Mobbs sustainable house (that is included in the project) and proclaim him a true follower of the permaculture way as if his work was somehow done in the name of permaculture. It is developing sustainable urban environments that motivates Michael.

What I like about the Sustainable Sstreets project—and its similarity to what Transition Town folk talk about—is its municipal focus. I’ve long thought that many of the things that permaculture practitioners employ at the household level would be better deployed as neighbourhood or municipal strategies. This would offer economies of scale by scaling-up the household level, could well be less costly to implement and is potentially more manageable. Whatsmore, a municipal scale necessarily brings in local government and where this is supportive it potentially makes available skills and funds.

Mitra’s comments on the need to scale-up permaculture are a provocative, critical and positive contribution to the ongoing conversation around the future of the design system. While some permaculture folk get easily offended even by constructive criticism, it’s something that we should be thankful for as it gives us insight as to how people whose entrepreneurial mindset has been applied to making things happen see the design system.

Social enterprise, of course, offers a path to implementing permaculture’s social ethics in a way that is financially viable, as does the work of permaculture people engaged in small permaculture-inspired business. This—financial viability—is one of David Holmgren and Bill Molliso’s permaculture principles.