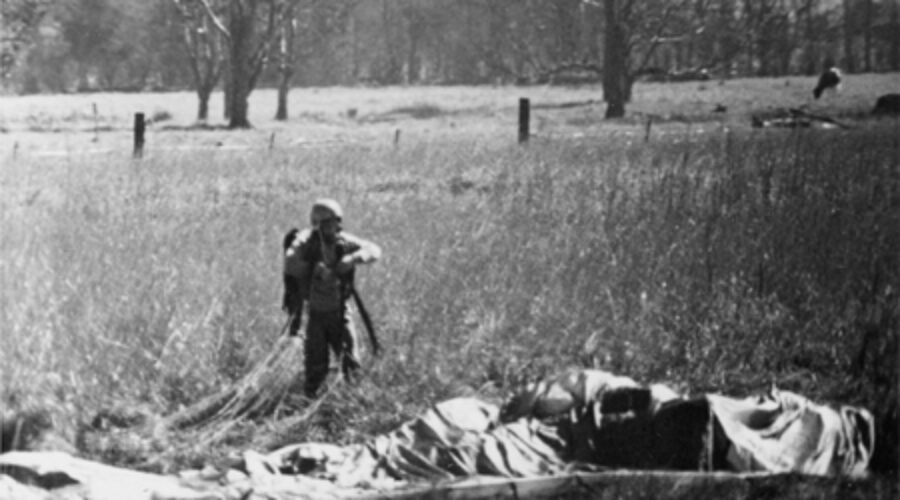 Russ Grayson recalls an aerial mini-adventure of several decades ago.

TRAINING WAS MINIMAL, just brief instruction beside the strip on how to exit the aircraft with a couple practice exits while still on the ground. Then some serious sounding instruction on deploying the reserve chute – just in case – and a little practice at a parachute landing roll. Then it was “let’s go” as three of us climbed into the seatless space behind the pilot of the Cessna 182.

As we roared down the airstrip I didn’t have time to think about this being my first jump. We climbed and the countryside below took on that patchwork pattern of farmland seen from an aircraft window. Only it wasn’t through a window that I watched the land fall away below. It was through the door of the Cessna, or where the door would have been if it hadn’t been removed.

We banked into what seemed like a long climbing turn and then reduced our rate of climb as we headed for the drop zone. I was to go out first, then the pilot would climb through another 1000 or so metres for the others to exit. It all sounded so simple.

What was less assuring was being told earlier at the drop zone how one of the group had just landed when a gust of wind came along before he had time to get out of his parachute harness. The wind inflated his canopy and pulled him along the ground… and into a barbed wire fence.

Then there was the warning to steer away from farmers’ dams, which I took somewhat seriously.

I was jumping a type of parachute known as a T10, an olive green military conopy. This you steer by pulling down left or right, depending on the direction you want to go, on a line with a toggle attached on either side at shoulder height. Simple, it sounded.

The silence was abrupt after the roar of the engine on our climb out… just the hiss of the aircraft as it passed through the air. No time to think about that, though. “Into position,” the jumpmaster called as he signalled to the opening where the door is normally attached.

Exiting is interesting. We were leaving the aircraft on its right hand side and you start by crouching at the open door, ignoring the earth a long way below, then putting your right foot on the boarding step, which is on the wheel strut, while reaching out with your left hand for the wing strut which you grip with a certain determination. You then reach out with the other hand further along the wing strut and cross step onto the wheel – which the pilot had thoughtfully locked by putting on the brakes to stop it rotating – with your left foot. Holding on grimly with both hands with your right foot just hanging there in the slipstream, the theory is that you are in the position to make a stable exit from the aircraft when the jumpmaster shouts “GO!”.

POP! I look up and feel a certain satisfaction as the big green canopy blossoms into its proper shape above me. No twisted lines, and that’s good news… no need to remember to release the canopy, tear away the ripcord of the reserve chute on your front, deploy the canopy by pushing it outwards and then to recall that the smaller reserve canopy has a faster rate of descent and isn’t all that steerable.

Exiting seemed to happen rapidly but hanging there drifting downwards over the landscape was the most pleasurable part of the descent, though I did watch those farm dams as I had been instructed. But all too soon the ground was rushing towards me. I checked out the wind direction and speed marker at the drop zone below and turned the canopy to steer into the gentle breeze. Then… bump crumple and roll… up onto my feet to gather in the canopy… then release the harness. Terra firma, but I was in no hurry to walk on solid soil again… I kind of liked it up there.

So ended my first jump. At the end of my next one, however, I found myself going through my parachute landing fall amid the long grass of some farmer’s field. Just a second’s delay in exiting has carried me way over the drop zone. As I stood and gathered in my canopy I thought it fortunate that this farmer did not graze bulls with a strong sense of territoriality.