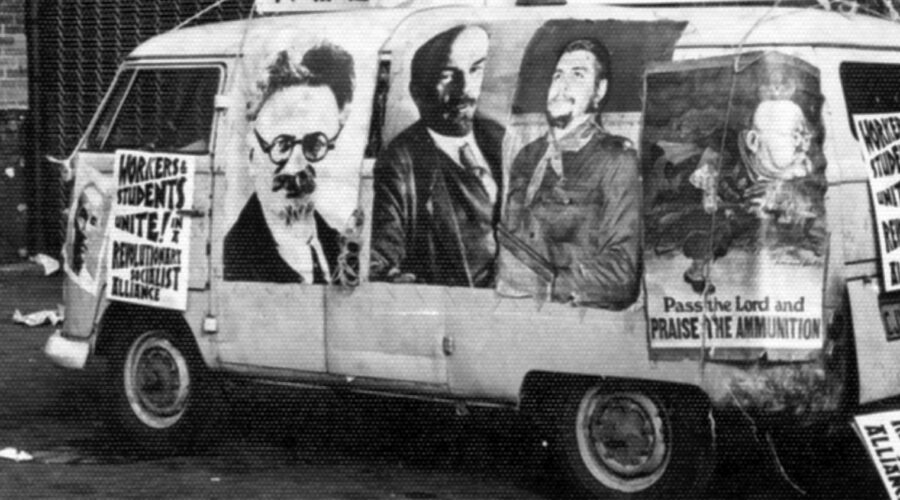 How to buy stamps

LABYRYNTHINE… that’s what it’s like… a tangle of streets falling towards the water in one of those North Shore harbourside suburbs. Which One? No idea, they seem to blend one into another with their neat, lookalike houses and old apartment blocks. Wouldn’t like to live in those old blocks of flats… they seem to be pokey little places with tiny windows, I thought.

Stamps were needed to mail out the Resistance newsletter, the means of communication for the main youth organisation of Sydney’s New Left. But buying stamps wasn’t the only reason the three were cruising those labyrynthine streets the better side of midnight. The other they had loaded into the Third World Bookshop’s old, less than reliable Kombi earlier in the evening when it was parked outside Trades Hall in Goulburn Street. Into it went a couple buckets of a pasty, white substance, a couple wide paint brushes of the type used by people who paint houses for a living and a parcel of A3 size, silkscreened posters printed a few days earlier in the  bookshop’s back room. I should point out that Resistance and the Third World Bookshop shared the same premises, an old, two storey building at 35-37 Goulburn Street on the dingy edge of the city’s central business district.

Preparation had started early in the evening. First, the shopping expedition to buy flour and sugar. The cheapest flour would do, no need for wholsesome wholemeal (even had it been available then) and sugar… well, sugar is sugar and you can get it in brown or white. White’s cheapest and does the job as good as any other colour.

Now, here’s the secret formula: take those two buckets later loaded into the Kombi, partially fill them with water (was it warm water?), stir in the bags of white flour just purchased, add a bag or so of the white sugar, stir quite a lot more until the mix thickens into a gelatinous, thick paste of an off-white colour, then exclaim—’Done!’.

It might not have been an exacting recipe and I’m not sure i’ve got it right. The proportions were added by dead reckoning rather than by measure, but it was exact enough to work. And work it did.

Then it was waiting for the sun to set, for evening to darken the city, for the streets to clear of early evening’s commuters, diners and others at large. Buying stamps, and the other reason for being out the better side of midnight, was something best done in a city of deserted streets.

Three were the number on this stamp buying excursion. Bluey was in his mid-thirties and had hair the colour of his name— red, that is — and, sometimes, a similarly coloured, trimmed beard. His manner was very much of the Australian working class mould… informal, direct, friendly. Come winter, he would don his khaki coloured duffel coat and spend his time doing much as he had spent the previous summer doing. On weekends he would be found behind the counter in the bookshop, but that was unpaid, voluntary work. Sometimes he would be found in the room out back operating the clanky Gestetner printer, its regular kerrr-chunk letting you know that printing was in progress, Other weekend days you might find Bluey lifting freshly printed posters from silk screen printer table onto the drying racks. Weekdays he had a regular job driving a delivery vehicle. With his work and the expedition about to set out that night, Bluey did a lot of driving.

In the waning light of evening

Afternoon’s light fades to evening; time goes by and the city quietens; numbers on the street diminish and traffic thins. It is now some time after nine… it is time to go.

Bluey drives. First, though, he explains how he will stay in the vehicle to keep a lookout while the other two do what they set out to do. Then we’ll go shopping for stamps, he announces somewhat cheekily.

The third person in that Kombi — she was a late addition and little is known of her except that she shares a taste for late might daring-do.

Through the city and onto the harbour bridge as Bluey moves the Kombi up through the gears. The motor makes that charactristic noise that only those who have owned or driven a Kombi of its vintage would recognise.

North Sydney, and Bluey veers to the right then swings to the east along what appears to be a major road but, being a stranger in these parts, I have no idea of its name.

We leave this road and turn onto a street that starts on what seems like a long downhill run towards the harbour that is still quite some distance away. Bluey drives slower here as if looking for something. On a short distance past old, two storey shops with what might be flats above. Slowing, he pulls over and parks but keeps the motor running — a good idea with this less than reliable vehicle, however it is more for a rapid getaway that he keeps it ticking over.

Bluey looks up and down the road.

The two in the back slide open the Kombi’s side door and step out, one with a bunch of posters, the other carrying one of the buckets of off-white pasty stuff and one of those wide  brushes.

Don’t imagine that there was no sense of adventure in this… it seemed all so surruptitious and daring as we went to work, quickly brushing the paste over the back of the posters then holding them in place as the one with the brush swished it over so that it gained firm adherence to telegraph pole or wall.

This we repeated along that unknown Lower North Shore road late that summer night, and when we had finished — and what a good job it had been — all those bland, featurless telegraph poles and walls were decorated with colourful posters bearing the message of the New Left. Revolution had come to a middle class encalve.

We were close to the harbour now, moving slowly past a minor string of shops. Bluey slowed the vehicle and he spoke more to himself than anyone else: “Yes, there it is. Time to go shopping”.

And, yes, there it was — the source of stamps over this way and the source of stamps across the nation — the post office. It was one of those old brick buildings dating back perhaps to the 1920s. Many of those houses around here would have been built then, at a time when this was a young country for those of European descent, a country of promise with a future to look forward to. Now, at the end of the 1960s, that promise was still there and those in the Kombi intended to inhabit it. And their shopping expedition was just one of the ways they planned to make the future — their preferred future — happen.

Bluey pulls over and turns off the engine. The three sit quietly for a few minutes as they scan the road and nearby buildings. Anyone curious enough to have looked out their window at the sound of an old, clunky Kombi would now have had their curiusity satisfied and would have retreated back inside, curtains drawn. All is quiet. The street is empty.

“You two stand at the entrance and watch the street while I get the stamps” says Bluey. Aknowledgement. There is no slamming of doors as the three quietly exit the vehicle.

The post office is one of those that have post boxes and a stamp machine in a foyer. Anyone in there is well concealed from the street, and that is a good thing this evening. While the two take up position either side of the entrance, Bluey jangles the currency in his pocket and moves towards the stamp machine.

Into the coin slot he pushed the currency, piece after piece as the stamps move of the slot in a long, continuous strip, each time making something like a little burping noise. The two watching the street come to the conclusion that the Lower North Shore is a rather quiet place this time of night.

I look over at Bluey, busy at work in the shadows. I’ve known him this last year, or is it longer than that?  I realise that I really know very little about him, his personal story. That’s true of most of those who come and go at the Third World Bookshop and Resistance.  Time there is spent in something like a continuous present.  There is always something to be done and little time to learn much of those you do it with.

This past year. It’s been a cavalcade of faces, of people.  Some came and went. Others are still around. People my age or a little younger, some fresh out of high school. They are middle class kids for the most part, some even from this North shore area, some at university. They mixed with others working for a living, making their way in the workaday world, and others doing who knows what as denizens immersed in the counterculture with its own dress style, language and pharmaceuticals. Most are smart young kids, some of whom may be destined for great things in life, others destined for their two years with the Green Machine. Such are these happy times of turmoil.

Suddenly — silence. The machine has stopped. Bluey’s out of currency. He’s rolling up the long strip of stamps.

Turning with that cheeky grin of his, he says in his characteristic chirpy  tone: “Well, that’s it — got the stamps. Time to go… I’ve run out of washers”.