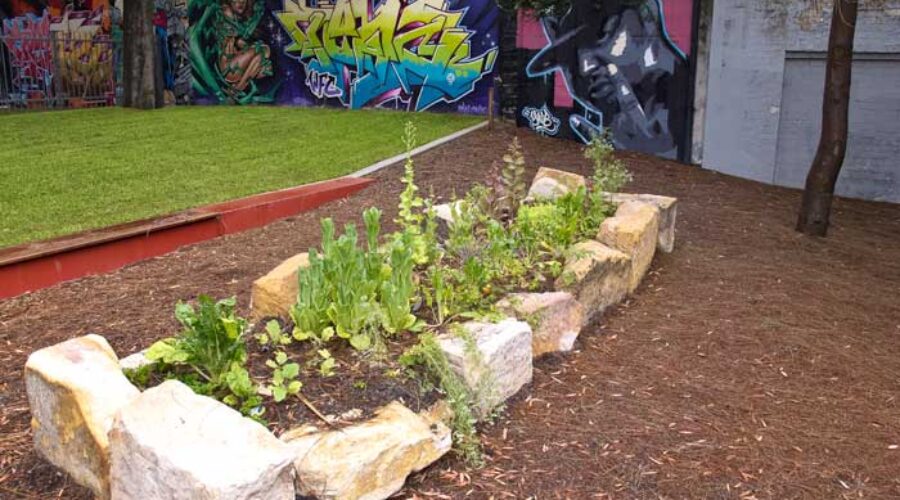 IT’S ALWAYS SOMETHING OF AN ADVENTURE  working with a new community garden group on their first project. You never know what to expect—so it’s best to expect nothing at all and that way you will be pleasantly surprised when things go well.

And go well they did over the first two meetings of the team that will set up the Bourke Street Park Community Garden, the second community garden in Woolloomooloo. That number would have been three had Housing NSW not demolished the informal (‘guerrilla’) community garden that locals started on its unused land , without permission, and operated for some time. Their idea was to put to productive use unused land in an inner urban area where public open space is in short supply. The state government department said they planned to build on the land and so the community garden must go. Go it did, but that was years ago and at the time of writing there is still no sign of Housing NSW building anything at all. What could have been a productive garden managed by local people is now a wasteland covered in the saplings of London plan trees.

The other community garden, Woolloomooloo Community Garden in Sydney Place, was established over a decade ago on its present site and before that was a tiny patch located below the Eastern Suburbs railway viaduct. It is now full, so a new community garden seems to be just the thing that is needed for Woolloomooloo, the densely populated area occupying the valley and its sides between Potts Point and the central business district.

I had been warned that the Woolloomooloo demographic could be a difficult one, however I found the people at the meetings easy to get along with and encountered no difficulties. Woolloomooloo has a preponderance of social housing residents who are supplemented by those in private accommodation. It is what demographers call a ‘low-income demographic’ but the area is dotted with pockets of private home owners.

I worked with two smart, enthusiastic City of Sydney staff on this preliminary work—Kristin and Yvette from City Engagement, the team that organises and runs community engagement. They, with their competence and cheery attitude, were a pleasure to plan and engage with in my role, which was to assist the team of people interested in using the area set aside for community gardening get started through two meetings:

Social design component done, I arranged for a landscape architect experienced in designing community gardens and training community gardeners in the skills they will need to lead a participatory site design. The process will be to take the garden team through a site analysis so that they get to understand the site and what influences conditions there, then to draw up a concept plan, negotiate this with the garden team and come to agreement on any changes, then produce a working drawing that will guide construction.

The City will purchase the required number and size of galvanised iron planter boxes and these will be installed as per the plan, as will an area set aside for composting that will make use of the rodent-resiatant domestic Geddy composters.

Later, the City plants to relocate one of its old trams in the same area as the community garden and retrofit it as a activity shed for local people, what s commonly known as a ‘men’s shed’ but has been given the name of ‘men’s and shiela’s shed’ in Woolloomooloo… perhaps we should just stick with ‘activity shed’. This was not part of the original plan for the site but after it was raised and I did a simple social ROI (social return on investment analysis to estimate the idea’s potential value to local people—what they could get out of participation in it compared to the cost of installing the thing) I realised that social return—social benefit—would be analogous to that from the community garden and therefore the shed should go ahead.

The garden group will be an unusual mix. There are people from both social and private housing, however the interesting inclusion will be the nearby Ozunan Learning Centre that wants to use the garden for horticultural therapy with Woolloomoloo’s homeless men.

TAFE Outeach, too, has indicated interest, offering the opportunity to create something quite innovative with the community garden, the activity shed and this diverse mix of community gardeners and social agencies.

For me, taking the project through social ensign and up to sit design stage has been interesting and rewarding. Now, its up to the gardeners to create something new in Woolloomoloo.