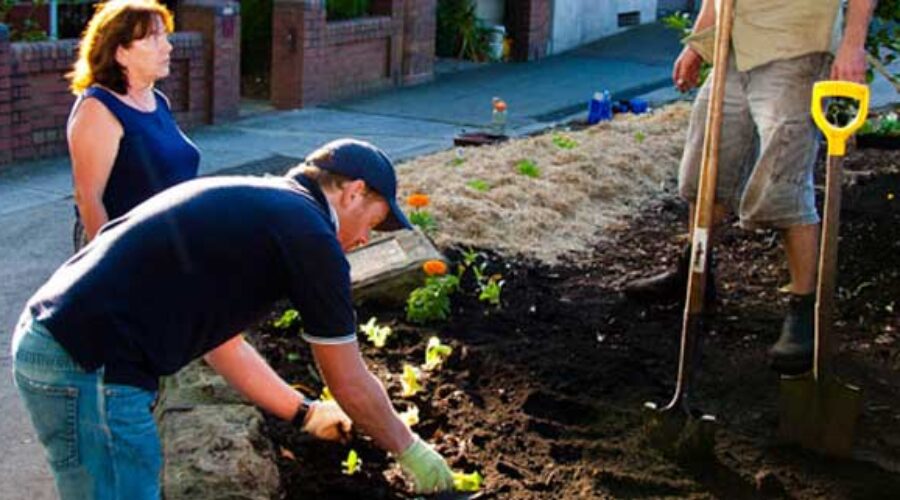 Read the story of day one of the transformation of the Barrett House footpath garden.

View the photo album of the Barrett House footpath garden.

IT WAS SUCH A CURIOUSITY that people stopped to look, to ask what was going on and to talk.

“Oh… are you making a community garden here?”, said a couple passers-by, hopefully.

On of these was a young woman with two young children. The boy was especially keen on watching those of us planting.

“You can watch the lady dig for awhile then we have to get going”, the mother said to the boy as he stood watching Fiona use a spade to scoop soil to mark out where he path would go.

“He likes digging”, his mother said to me “At home he digs the front lawn”.

Steve Batley, the landscape architect council uses for design as well as garden and permaculture  education was scooping holes into the freshly laid mulch, filling them with a handful of soil and inserting seedlings of herbs, vegetables and flowers.

“Do you want to plant something”, he asked the young boy, who hurried around to take up a trowel and start excavating. Steve guided him through the planting process and his mother ended up waiting there somewhat longer than she had anticipated.

Planting, this late afternoon, has become something of a children’s participation activity and a spectacle to passers-by.

It was day two of rehabilitating the footpath planter outside Barrett House—Randwick Council’s energy and water efficient demonstration house that serves as a meeting space for community organisations and as a workshop space. You find it at the end of the commercial strip on Frenchman’s Road, between Clovelly and Carrington roads.

Day one, a week earlier, had brought the removal of the agapanthus that had previously occupied the patch and the dismantling of the community compost bin which, when Fiona started detaching the panels to clean the bin, she found to be infested with cockroaches. The bin had created ideal habitat and the roaches had set up a breeding colony in it. The new bins will be easier to clean and offer few of the nooks and crannies the Aerobins made available to roaches and their hatchlings

Once the garden had been cleared we discussed how best to position the Gedeye bins and the accompanying rubbish bin that would hold the  dry, carbon-rich leaf litter and other material that composters would add a handful or two or three of to the kitchen wastes they tossed into the community compost bin.

Supplying enough carbon material has been something of a challenge for community composters and it is needed to balance the nitrogen-rich kitchen wastes or the compost can get… how do I put it?… sort of sloppy, disagreeable looking and maybe even smelly. It was telling that someone commented that she could smell the compost in the bin—the one that the crew removed—when she walked past.

We decided that the best place was more or less where the bin had been—up against the moraya hedge that forms a visual barrier separating the road from the footpath. A platform will be levelled for the bins at the next stage of garden reconstruction. Meanwhile, the Gedeye composter and rubbish bin have been placed there and brought into use.

First task in the makeover of the roadside planter was to mark out where the path leading from the footpath into the garden bed would go. A path would be necessary for people to access the community compost bins and for maintenance and harvest of the herbs and vegetables planted into the bed.

A simple, curved path leading around the small, fruiting lemon tree planted by the three Eastern Suburbs mayors at the opening of Barrett House was the obvious solution, and this will be paved in the next phase of garden construction.

This leaves a broad band of garden along the footpath edge and a broad patch around the lemon tree. It was the footpath edge that was planted out this time. It brings the herbs and vegetables within easy reach of passers-by, which is just fine because this is a forage garden from which local people are welcome to take to supplement their cooking.

A public forage garden? Won’t people rip up all of the plants and take them? This is a common but valid question, especially because we have learned from other gardens that many people don’t know how to harvest vegetables. Instead of taking a few leaves of lettuce, for example, they take the whole plant. We expect that this will happen at the Barrett House planter and Council’s sustainability crew—Richard Wilson, manager of the 3-Council Ecofootprint Program and Fiona Campbell, sustainability educator—will simply replace the removed plants.

There is an element of trust here, and while a limited amount of vandalism might occur—we accept this possibility—more likely is that people will not trash the garden, taking only moderate amounts of produce. We could erect a low fence around the garden but all this would do is say to passers-by is ‘don’t touch’; ‘this garden is not for you’—and that’s just the impression we want to avoid. One thing that has been learned is that when you put up a fence or a ‘keep out’ sign people cease to care for what is behind that barrier. Not what we want at the Barrett House footpath garden.

Watching people passing by stop to look and talk with the garden makers, I realised that this—this positive, direct contact between council staff and the public—is the best sort of public relations councils can find. It is of far greater value than any number of media releases, any number of official announcements.  Why? Because it is authentic.

There’s still some work to do to complete this little patch of footpath edibles and that is being planned. Anyone in the area, including anyone from a permaculture or a Transition Town group is welcome to participate—just call Richard Wilson at Randwick Council.

As day turned into the half light of early evening I sat talking with Cecelia on the wormfarm seat below the yellow robinia tree in the tiny Barrett House garden. The pedestrian traffic was less now, but as we looked out onto the footpath garden resplendent in its cover of fresh mulch, a man passing by stopped, looked it over then bent down to smell the bright yellow marigolds. Then, we realised, we had created something worthwhile. Our work was done.