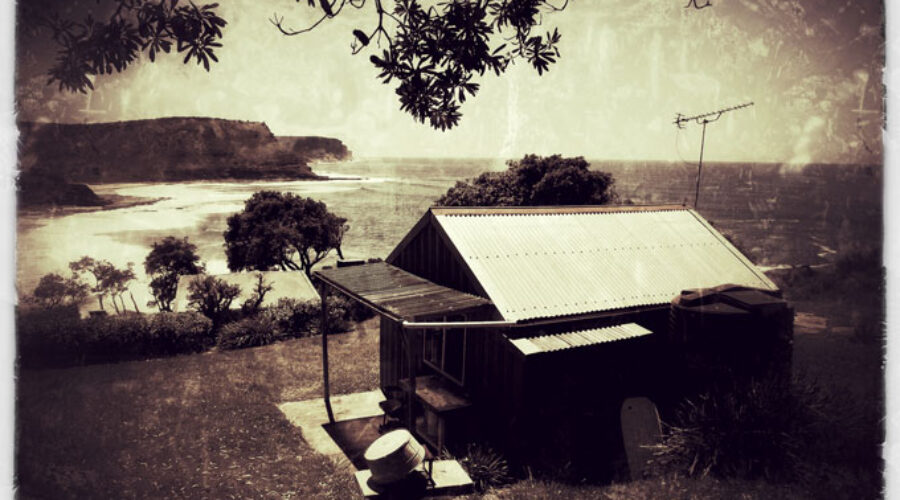 WHILE I WAS AT the Randwick Community Centre the other day I took the trouble to look closely at the old photographs of the area arrayed around the walls.

And as I stood in front of one of those images, a photograph of times past taken by some unknown photographer using what probably was a glass plate camera on a tripod—time consuming, fiddly photography—I noticed that the image was of the La Perouse area where Sydney’s Eastern Suburbs fall into botany Bay, and it was taken after the Bunnerong power station had come into production for there were other images that showed its high, dirty smokestacks belching its noxious coal fumes into the sky. That power station is now long gone—there’s another photo that shows it at the moment an explosion rips into its walls to start the demolition.

But there was something else in those photos, in that particular one I stood in front of, that has also gone… long, long gone. It’s those shacks of galvanised iron and timber dotted through the sandhills behind the small beach there on Botany Bay. Modest, hand made affairs they were, the work of what we would today call ‘owner occupiers’ which in those days, I guess, was the norm. I think today it’s known as ‘vernacular architecture’.

These were the work of what we now call ‘low income people’ and as I stood and looked the notion that came into my head was of people scrounging building material and cobbling it together so that it kept the rain out, if not the heat of the midday summer sun. Makeshift those first dwellings of the area might have been, they were prime examples of a fine Australian building tradition, that of shack building.

We’ve lost most of our architectural shack heritage. Many were not solid enough to survive the decades and others were removed to make way for more substantial buildings. You see this in those once out of the way coastal towns where beach shacks have been replaced by substantial homes.

Occasionally, there have been public campaigns to retain these examples of our national shack culture from demolition by civic authorities. Such was that around the Crater Cove huts in Sydney Harbour when, in the 1980s, the national park service thought that the foreshores should be free of human structures. A similar struggle took place later to retain the huts in Royal National Park.

Down there, on Sydney’s southern border where wild nature has retained a substantial foothold in Royal National Park, there are three substantial shack settlements remaining. The first you encounter when you walk to the southern end of Garie Beach, a wide swarth of golden sand held in place between the high, flat-topped but steep-sided headlands at either end. Walk south over the headland the hut settlement occupies – and walk you must for you are now out of the realm of the motor vehicle – and sooner or later you come to Era with its own hut village. Walk south over the next headland and you find the smaller shack village at Burning Palms.

These modest buildings we made of scavenged galvanised iron and timber and various other building materials which were hand-carried in and assembled into weekenders by people from the townships near the national park and by Sydneysiders. They have been passed down through the generations, modest architectural hierlooms, and today their holiday-time and weekend owners enjoy a permissive occupancy following campaigning against the national parks service which wanted to demolish them.

But it’s less the history than the ambience that you experience when you walk among these shacks. A village, even a shack village without roads and cars is truly unique, as is one consisting of small buildings maintained in good, habitable condition, patched here and there by new materials and still in use for their original purpose – temporary accommodation. These shack settlements are heritage, but they are living heritage with the historical continuity that makes them authentic. The little villages are not heritage-as-museum as so many historic sites have degenerated into, to become mere cliches of their former selves.

As I stand looking at that photograph of those long lost shacks that once dotted the sandhills behind that beach on Botany Bay all that time ago, I feel comfortable in that the knowledge that not really all that far away, just over the southern horizon, those national park shack settlements are still there, still a tangible link with our cultural past.