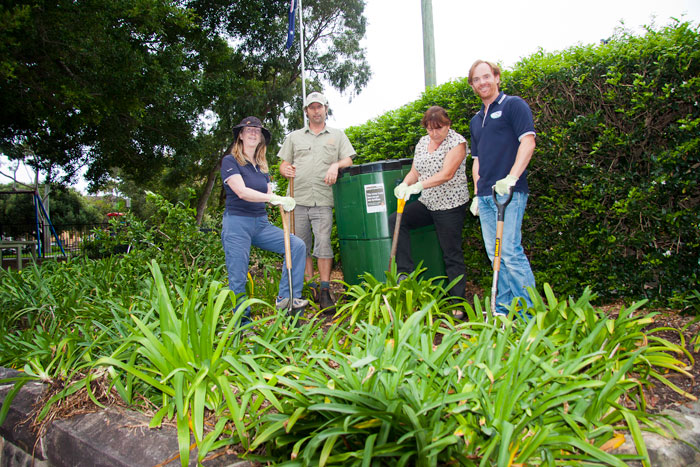 IT WAS A RIPPING TIMEon the footpath garden adjacent to Barrett house in Randwick as we ripped out an ornamental monoculture to make way for an edible polyculture.

Here’s how it was done: dig the garden fork deep around the root mass and lever it up and down to loosen the soil. Next, repeat this process all around the plant. That done, grab the thing by its strap leaves and heave—and up it comes. Shake it back and forth and watch the clods of soil fall away, then cast it aside with all the others. The garden at the end of the day—free at last from agapanthus and ready to prepare the soil for vegetables and herbs at the next working bee. This was day one of two to repurpose Randwick Council’s footpath garden bed, at the end of the commercial strip on Frenchmans Road, from a low-biodiversity agapanthus plantation into a high-biodiversity herb, vegetable and fruit patch.

It didn’t take long for the energetic crew to remove the agapanthus outside Barrett House, the retrofitted, energy and water efficient building shared by Randwick, Woollahra and Waverley councils and used as a meeting place by community groups and for council workshops.

The day started as all such events should, sitting around the table, coffees in hand, discussing how to proceed. Day one—this cloudy and, later, rainy Thursday morning—was to bring the clearance of agapanthus from the garden bed in preparation for next Thursday’s installation of path, compost, mulch and edibles.

It was decided that the community compost bin, an Aerobin type, should be emptied but that the fruiting lemon tree planted at the opening of Barrett House by the three eastern suburbs mayors should be retained.

Agapanthus… we’ve probably all seen it because it’s quite common as a public place planting. It’s a perennial with long, dark green straplike leaves and clusters of colourful flowers on a long stalk, and it is favoured by councils for its ease of maintenance. Removing it is sometimes easy, sometimes more difficult, especially when it forms a large root mass and is quite heavy to free from the soil and lift.

The agapanthus removed, the question was what to do with them… they were offered to passers by but nobody seemed interested… so what about composting them?… that was a possibility but wouldn’t it be better to replant them somewhere? A call to council’s nursery solved the problem—they would take them all… which meant that creation of the new garden would be a zero waste operation. Fiona Campbell cleans out the community compost bin. The Aerobin model was found to be infested with cockroaches and was removed in favour of the simpler Geddy bin which has fewer nooks and crannies where the creatures can breed and is easier to maintain and clean.

The community compost bin situated in the footpath garden is used by people living nearby, and as as soon as the agapanthus was removed from around it Fiona set to work, removing its panels so as to empty it out.

As is found in other community composting systems there was a preponderance of kitchen and food scraps in it but not enough of the carbon materials that make for a balanced compost mix. Compost requires a mix of dry, brown carbon materials and moist green, nitrogen-rich material for effective breakdown.

The day after the gardening session, Richard and Fiona, from Randwick Council, installed a rubbish bin adjacent to the composter to hold a supply of dry leaf sweepings. It is planned that, when council maintenance staff sweep the fallen leaves from below the adjacent native fig trees in the park, they will put them into a bin from which community composters could scoop a handful to add to their kitchen wastes.

At the same time the two replaced the Aerobin with a couple of the domestic, black plastic Gedeye compost bins (also known as Dalek composters because their shape is reminiscent of the malevolent Daleks that appear in the BBC television series, Dr Who). These are easier to use that the Aerobin and compost is more easily removed. The things you find in compost—a whole coconut would take quite some time to break down.

Community composting is a new idea presently being trailed by Randwick, Waverley and Leichhardt councils as well as by the Sustainable Chippendale team and, in Melbourne, by the City of Yarra. It’s a means of reducing household green waste for people living in apartments instead of consigning the stuff to landfill.

Footpath gardening, too, is something new, presently being done in the Randwick, Waverley, City of Sydney and Marrickville council areas.

The design and plant list for the revived footpath garden is being developed by Steve Batley from Sydney Organic Gardens, who provides garden design and education services to Randwick and other councils. The project is facilitated by Three-Council Ecofootprint Project Coordinator, Richard Wilson and by council’s sustainability education coordinator, Fiona Campbell. They were assisted this day by a Permaculture Sydney east member, Cecelia, and the author.

And next Thursday? We start on soil preparation, mulching and planting out… at the end of which the conversion of the agapanthus monoculture into a shiny and tasty new vegetable and herb garden will be complete.

This story also published at: http://reduceyourfootprint.com.au