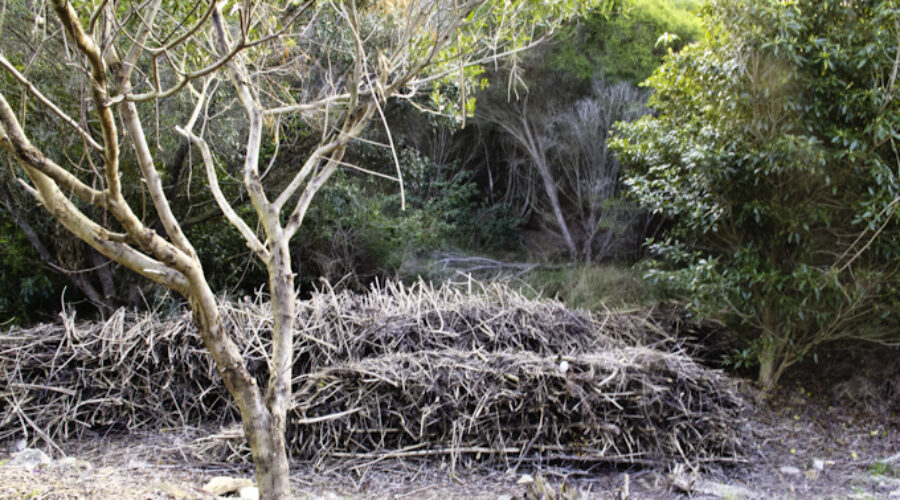 Ecological restoration: A familiar argument from across the Tasman

IN THE CABIN where we stayed during Australiasian permaculture convergence (APC11) in April 2012,  not far from the banks of the Tongariro, there a some past editions of NZ Hunter magazine.

Hunting is big over there in New Zealand. On the way down from Auckland we passed a car with the body of a deer tied across the bonnet. Venison is definitely on the local menu, an example self-provision of  food.

In that magazine there was a review of a New Zealand book, WF Benfield’s The Third Wave-Poisoning the Land, which presents a case against the use of the wildlife poison, 1080.

History as waves of change

The first wave of his title was the coming of Polynesians a millennium ago. Just as is proposed for the extinction of the Australian megafauna and the transformation of plant ecosystems in this country, Benfield says that the Maori exhausted the wildlife resource of flightless birds (a variety of birds occupied the ecological niches belonging to mammals in other places) and changed the land with “extinctions of the majority of the browsing bird biomass and major forest composition changes”.

Europeans, with their animal introductions and their own version of changing the land, arrived 400-500 years after the Maori. They are Benfield’s second wave. The third wave are current attempts to undo aspects of European intervention and introductions.

One of these attempts takes the form of what in Australia we call bush regeneration or restoration ecology. And just as there is controversy about Australian bush regenerators attempting to turn the bush back to the eucalypt and acacia dominated biome that evolved after Aboriginal firestick farming was discontinued a little over 200 years ago, so there is a parallel controversy in New Zealand.

For Benfield, restoration ecology “is an attempt to set the clock back to an idealised world that only existed for a snapshot in time.”

He might have something there. Here, it’s unclear what the model is for bushland regeneration. Is it to recreate the landscapes the regenerators imagine the Aborigines left us with when their dominance of Australian biomes ended with European settlement? Is it simply to de-weed (a weed in this context being any plant of non-Australian origin) the bush as it has evolved since the departure of the Aborigines as land managers? Is it to return the bush to a condition it might have been in before the Aborigines brought with them the first massive wave of ecosystem change as they moved across the county with their original colonisation?

If it is to return the land to how the Aborigines might have left it, then bush regenerator are doing it wrong, at least in part. That became clearer to me on reading Bill Gammage’s The Biggest Estate on Earth—how Aborigines made Australia in which he reports how the early settlers, explorers and artists reported landscapes consisting of parklike woodland where there should have been forest, not unlike the estates of Britain’s landed aristocracy; of being able to pull a wagon across country without feeling a single tree; of a landscape devoid of undergrowth and the shrub layer.

There was wild country however, where the vertical groundcover, shrub/small tree layer and canopy of the natural forest or where rainforest predominated, but much of the land had been turned into open woodland through a sophisticated use of fire and a deep knowledge of the different ecosystems, their plants and animals that could only emerge from total immersion in the landscape over generations, over thousands of years. The result was a system of landscape management so that it could support people.

This, according to Gammage, is how the Aborigines left the land, as a mosaic of forest and the woodland they created… and when they did leave it the undergrowth, previously suppressed by the judicious use of fire, came back with a vengeance to bring us the bush with its thick undergrowth we find today. Early artists did their work at the time between the Aborigines discontinuing their management of the and and the rerun of the scrub, a brief point in time.

And here’s another point emerging from Gammage’s book—this conversion of the landscape as well as that of large areas of Tasmania was a work of continental scale. We hear about the idea of terraforming the planet Mars by geoengineering its planetary systems, but when we think about it a little we realise that the Aborigines were engaged in their own terraforming project to recreate Australia so that the landscape provided for their continued existence. Industrial cultures, too, terraform landscapes globally but the difference with the Aboriginal approach is that the way they did it resulted in a new landscape that could be sustained over millennia.

Is it the landscapes of the Aborigines or the scrubby bushland that regenerators seek to recreate?

Like Settlers in early Australia, Benfield writes that the early European naturalists presumed the land in New Zealand was in its original condition. They did not recognise that the Maori had changed it substantially.

He writes: “Through ignorance, this has become the freeze-frame restoration biodiversity model for current management, entrenched in various acts of parliament and local body regulation.”

It’s a similar course to that followed in Australia where bushland regeneration long ago gained the ear of government and where it became established as a new industry in the 1990s. That gave it a measure of economic clout that added to the impetus it already had gained by becoming a popular voluntary activity for mainly middle class people and rural Landcare groups.

I’m not maligning bush regenerators here—most are well-meaning people who believe they are making a contribution to a better environment (and I once did a course in bush regeneration and practiced it a little and late became a Landcare educator at a city farm in south-west Sydney). But they have gained an inordinate level of influence in state and local government and their bio-nativist ideology is frequently taken as the default setting for local government when it comes to revegetation.

Landcare, and soon after it bushland regeneration, started to clash with permaculture as both approaches to land management grew through the 1990s. This was not always the case as permaculture people were sometimes Landcare people too and, in the suburbs, supporters of the wider growing of native plants. When it came into conflict with permaculture folk wanting to plant food bearing species and create their recombinant ecosystems however, bush regeneration could become a brake on urban food security. It’s no accident that permaculture co-originator, David Holmgren, has said a few critical words about restoration ecology.

Nonetheless, it’s an interesting topic and the review in the NZ magazine indicated that it is of interest to more than a few Australian permaculture practitioners and food security enthusiasts.

It was an intriguing thought to begin a permaculture convergence with.