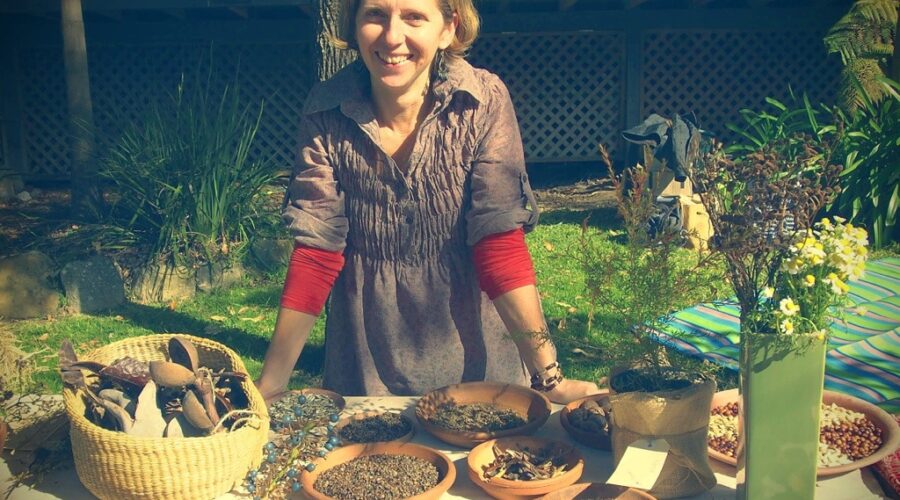 SO WE STARTED in the usual way by getting the 20 or so packed into this small room to introduce themselves and what they hoped to get from the coming hour together. That ranged through learning more on organic and local foods, where their school could get the stuff and how they could convince staff and parents of its value.

I was with Catriona Macmillan, who is a food systems consultant, at the ECEEN conference. ECEEN — the NSW Early Childhood Environmental Education Network — is a professional organisation for people working in sustainability education in pre-and-primary schools, and judging by the number and enthusiasm of those present, it’s something of a thriving organisation.

Walking through the conference venue I found a marketplace with books and resources on sale and I found familiar faces — a busy Julie Gaul, an ECEEN organiser — and Emma Daniel, a horticulturist-landscaped designer and Randwick community gardener who was there doing a seed saving workshop. She had bowls of seed spread across an outside table, which, when she left it awhile, was discovered by magpies.

Why food is a relevant topic for people working in this sector is because there is now something called, I think, the Early Childhood Framework, and food gets a mention in it. Not all that substantial a mention, but something is better than nothing and people could look through the rest of the framework to make useful links with other topics. Preschools are visited by assessors and they will be looking to tick the sustainability box. Sometimes, though, so I have been told, centre staff don’t know how to introduce sustainability topics to their centres.

Introducing our food session
Present in our session were a couple young women teaching at private schools, a preschool cook, assorted school and preschool teachers and an administrator or two. One is a Sydney Food Connect City Cousin, the name given to the people who crew the weekly distribution of the organic, local food boxes to subscribers to the CSA (community supported agriculture scheme — http://sydney.foodconnect.com.au/).

After that we introduced ourselves, Catriona’s and my different but sometimes overlapping backgrounds in community and smaller scale food business, Catriona’s role on the Organic Federation Australia, the peak industry body, and on the team that established the Australian Standard for organic products, her background in organic wholesale, advocacy and retail. If you get the idea that Catriona is Sydney’s organic food maven, you’re right. I briefly mentioned my background in international development in food security and small scale village farming systems and analogous work here in Australia with community garden development and with the Australian Food Sovereignty Alliance developing the People’s Food Plan. Catriona told the group that I left out my role in permaculture education, which I had.

The difficulty with local
After intros, Catriona did an introductory talk on organics covering certification, the Australian Standard and why it came about. Then I asked what people understood by ‘local’ when it came to ‘local food’. Responses ranged from food produced in Australia to someone remembering that someone else had claimed it was food from within 100km of the city.

For me, you can’t define local in terms of kilometres distant from the city. In Food Connect, local means seasonal and I use the range over which the CSA sources its foods as a guide to what local means in practical, realistic terms. Last I looked their ‘food miles’ was around 200km. That includes the distance travelled by Sydney’s closest source of organic bananas, which is Coffs Harbour, and of coffee, which is the Byron Bay/Lismore region.

The difficulty with the 100km range one participant claimed for local (it’s actually an Americanism and is 100 miles, not 100 kilometres) is that examples I have read about include people in the US who have moved to a rural town to try to live off food from within that 100 mile range. That’s an interesting experiment, however doing that for a metropolitan city like Sydney would be difficult, giver the sprawl of the place, and would exclude the farmlands of the Hunter Valley, south coast and the Riverina. It would also be goodbye to bananas, avocados, grains and those delicious, tasty tropical fruits we enjoy in season.

Small group collaboration
I sometimes find that in sessions like this at the ECEEN conference, people bring their problems while others are unknowingly carrying the solutions to those problems. That’s why I like to get people talking in small groups, so they can share that information. So, next up, I got them to self-organise in small collaborative groups with focus questions about what barriers them have run into and what solutions they have found in introducing more wholesome foods and food education into their schools and centres. That might have been a little too broad, but when your allocated hour for the session is moving on all you can realistically do is to get people to learn of each other’s barriers and solutions and to encourage them to follow up the conversation.

All too soon Rose, our minder from ECEEN, gave the five minute warning yet just before we were to finish there came another flurry of conversation… perhaps we were just getting started, I thought. I suggested that, as conversations as short as this barely allow you to scratch the surface of a topic, the conversation could be continued on ECEEN’s social media. This I said glancing over to Rose in hope of receiving confirmation that ECEEN did, indeed, have social media. Yes, she said, they have just set up a Facebook.

The ECEEN conference took place at Naamaroo Convention Centre, adjacent to Lane Cove National Park, in a big patch of remnant bushland on the city’s northside, among the suburbs. That gave me the excuse as I was leaving (as if I needed one) to wander by the creek and the bush among the casurinas, and look out on the golden, late afternoon orange glow of sandstone outcrops and the chaotic shapes of the eucalypts (note to self: I should do more on this).

If you teach young children in sustainability topics, I seriously suggest you consider becoming an ECEEN member. Contact ECEEN: http://www.eceen.org.au/