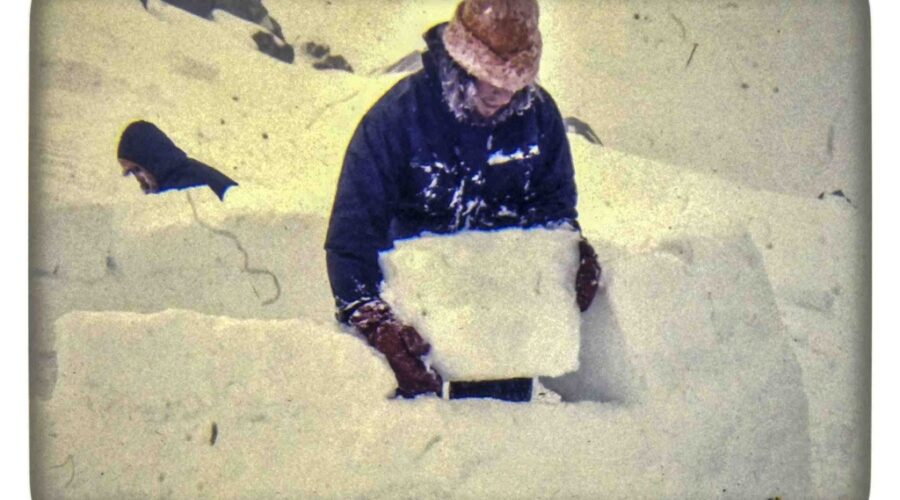 A domed home in the hills

AS it’s the first day of Spring 2013 I thought I might commemorate the passing of the cold months (which weren’t really all that cold at all) with a picture from my film photography days, a photo now some decades old that raises recollections of a memorable night in the winter mountains.

For photographers who might encounter this story, the photo was taken either with an Olympus OM10 or, more likely, a Canon TF SLR with standard lens.
…………

MY MEMORY of that night is as clear as was the mountain air.

We were on a multi-day trek through Tasmania’s winter mountains. It had been a good snow year and about us the blanket of whiteness shone with a bright, reflected glare in the afternoon’s sunlight and was deep enough for what we wanted to do.

We started looking for a campsite well before sundown. It had to be just the right location. We scouted around awhile as we moved along the ridge then found a place, a shallow depression sheltered by surrounding rocks that would offer protection from the wind should blizzard conditions develop during the night.

You see the result of this in the photo, a man clothed against the late afternoon cold of a Tasmanian mountain snowfield, placing the solid block of snow he has cut onto the wall of an igloo we were building for our overnight accommodation.

In the winter mountains, this is how we lived… sometimes pitching a tent and anchoring it firmly against the night’s cold and, perhaps, strong winds (I took care in doing this, having had a tent blown away in the night, the noise jarring me suddenly awake to look up at the star studded sky above). Other times we would find a snow slope and dig a snow cave. This time, we built an igloo.

Standing outside in the early evening sometime after sundown, it must have been well below zero. It was quiet, the sky was clear and the stars like diamonds. There was no wind and the air had that crispness, that sharpness, that only those who overnight in the high snowfields would know.

We were quite some distance from habitation but being high on that ridge, and with the air so clear we stood there, out little group of warmly-clad figures who could nonetheless still feel the evening’s chill, and in the distance we could see the distant lights of farmhouses in the Derwent Valley. It was a wonderful sight and never since have I seen conditions so clear or been able to see so far.

TO MAKE AN IGLOO
To make an igloo you find compacted snow and carve blocks like that which you see in the photo. The base of the blocks we would angle so that, placed one on another, they would spiral their way towards the top of the dome. An entrance tunnel would be cut so that it dipped in a curve and surfaced inside the igloo. This kept the warm air in.

Once inside, someone would take a touring ski pole or some similar object and make a ventilation hole so as to ventilate the igloo, allowing in a seepage of fresh air, removing expired carbon dioxide (and so preventing suffocation during the night) and allowing the exhaust of our small bushwalkers’ stoves to escape, these using the petrochemical, shellite (aka white gas), for fuel.

Early evening now and almost dark outside. We start a couple bushwalkers’ stoves and put on some quick-to-prepare food. The igloo fills with a pleasant fug and the hum of the stoves. Those stoves — they make a sound that is background for bushwalkers but that largely goes unnoticed. It’s a sound you hear repeatedly in the open forest of a summer campsite and in a mountain hut.

Dinner eaten, we put on a pot of water for a warming drink, one of the sweet luxuries of mountain travel, especially in the colder months.

It’s quiet in an igloo, the snow walls insulating not only against the cold but against sound too. Here, it remains a little below zero through the night, not particularly uncomfortable when your wrapped in your sleeping bag. It’s quite different to overnighting in a tent with only a sheet or two of nylon to offer protection from the sounds of the night or the pounding of the wind or rain.

A GOOD FEELING
It’s such a good feeling to crawl into your sleeping bag on a cold winter night, especially when you are surrounded by the icy dome of an igloo. This done, talk follows… talk of people we know… talk of past journeys through the mountains… talk of plans for the coming spring and summer. An igloo can be a reflective as well as a speculative enclosure.

I don’t know who was last to turn off their torch but it certainly wasn’t late when they did so. We had a distance to go the next day before we would descend the ridge and enter again the land of colour, the green of trees, the orange of lichen and the smells of a vegetated world.

A calendar triggers memories of mountain huts, summer and winter…

Life on the road. It's a romantic notion. It is also reality for a growing number of people. I got