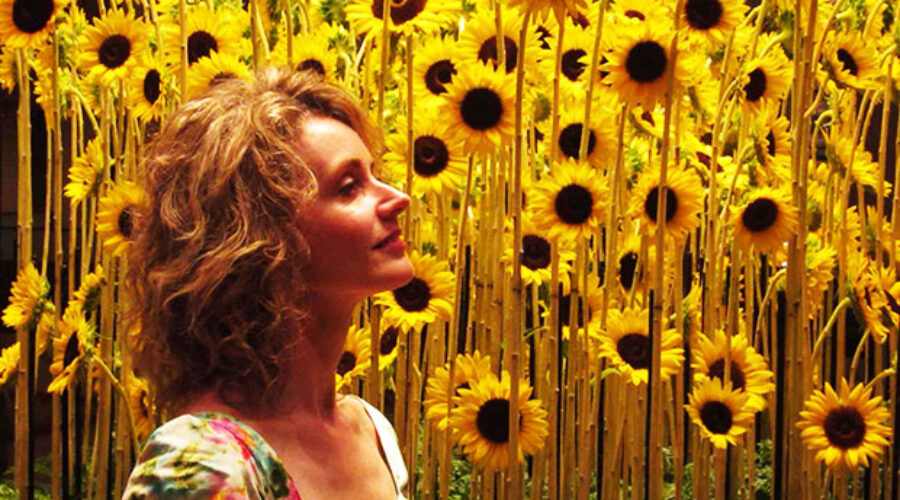 Declutter your life with Cecilia

You can think of Cecilia Macauley as a connector; she describes herself as an edge dweller. Cecilia is both of these — a connector between Japanese and Australian culture and a woman who lives on the edge where those cultures meet.

Edges are important to Cecilia because she is also a practitioner of the permaculture design system. Permaculture sees edges in human society as potentially productive places where new ideas form. It’s just like edges in nature — the ecotones where two ecosystems meet — they are productive places supporting species from both ecosystems.

It was a fresh approach to applying the principles of permaculture design to the overabundance of stuff that accumulates where the edges of organisation and disorganisation meet that Cecilia brought to Randwick Council’s ‘Declutter Your Life’ workshop on a fine morning in October this year.

Cecilia is a petite, stylishly dressed young woman with well coiffured blonde hair and a light, outgoing personality. “You never forget the powerlessness of being a child”, she said in explaining that, as a daughter in a large family she learned to cook and look after herself at a young age. Now, she continues to do that as a designer of small urban gardens and redesigner of cluttered urban lives.

It was mostly females who sat in the circle at Barrett House at the workshop that day. Most wanted to declutter. A couple had already started. Some had attended other workshops that council’s sustainability educator, Fiona Campbell, had organised. Others were new to the Barrett House community centre.

Fiona started the workshop by exploring the meaning of ‘permaculture’ for it is the principles of that design system that Celilia applies to decluttering homes and lives. One of the participants thought it was self-sufficiency; another thought it was about sustainability; was it about working with nature in the garden, asked another?; one thought it was about gardening but the philosophy of permaculture could be applied to anything.

“For me, it’s more self-reliance than self-sufficiency”, explained Cecilia. “Permaculture is about linking things up, about maximising options, about using design-power. It is about the ethic of care of people, about the way you live and about caring for the Earth. For me, the principles of permaculture are like goals.

“You don’t have to be a gardener to do permaculture. Instead, you can support the lady who sells at the farmers’ market”, she said.

“Permaculture is essentially putting the right things in the right place”, said Cecilia about organising our home space to bring order to the excess of stuff that can clutter the places we live in.

“I like to co-locate things with where they are used. That way everything is at hand. Permaculture is like playing chess with the world, putting things where they are valuable. I make use of permaculture’s idea of placing things in our home according to zones”.

Elements in design in permaculture are placed according to the frequency at which they are used or visited. Applied to a home garden, for example, fruit trees are located further from the dwelling because they are visited less often for maintenance and harvesting. This is known as Zone Two. The kitchen garden is placed close to the dwelling in Zone One because it is visited frequently to pick herbs and vegetables for cooking.

Applied to our homes, Zone One can be considered the places where we put things we need more often. “Things like work in progress”, explained Cecilia. “This is the high-attention zone and we make places for things that change, such as our fridge door and kitchen shelving.

Kitchen shelving. Hearing that, my mind threw up an image of the kitchen at Seli-Hoo, at more than 30 years one of Australia’s longest running share houses. An owner-occupied premises in Adelaide, the kitchen features an array of open shelves with foods stored in clear glass jars so everything can be seen and found easily. Cooking utensils are co-located with the stove where they can be easily reached. There’s none of that hiding stuff away in dark cupboards where it is out of sight, out of mind and out of use. Seli-Hoo is a fine example of logical order. It is uncluttered. It is attractive. It works. I thought that it must be what Cecilia was talking about.

“Turn the kitchen sink into a shrine of beauty and love”, Cecilia advised. “Aim for zero dirty dishes on the sink although you can put them aside and do a single washup later in the day. “It’s about setting up to do a task so you’re ready to go. A place has to be clear to work in”.

Applying the permaculture zoning system to the home, Cecilia explained that zones Two and Three were for things used less frequently. Zone Four might be a location for stuff from the past “…that is still loved, stuff that might be used only once a year and that is stored in clear boxes in the garage”.

Here’s a few tips on decluttering and reorganising your home:

If a decluttered mind is reflected in a decluttered house, then Cecilia’s workshop made clear the logic of making the effort to shrug off all of that accumulated, unused stuff so as to clear our physical as well as our mental space.

Interestingly, her workshop takes permaculture design into an aspect of life it seldom ventures into and in doing so shows the versatility and universality of the design system’s zoning concept.

As someone who is in the process of decluttering I have learned in a practical way the wisdom of following Cecilia’s ideas. It’s a form of simplification of possessions and, in giving ourselves permission to abandon and pass on possessions we make limited or zero use of, there comes a clearing of the mental as well as the physical space, a mental lightening.

When it comes to the stuff we own, there’s the confusion of clutter… and then there’s the having of enough, enough that is well organised and, somehow, seemingly all the more valuable for being so.

The Big Aussie Swap Party is a great opportunity to hand on those possessions we no longer need, an incentive to get bust decluttering. The next swap will be held at:

Find out more at http://reduceyourfootprint.com.au