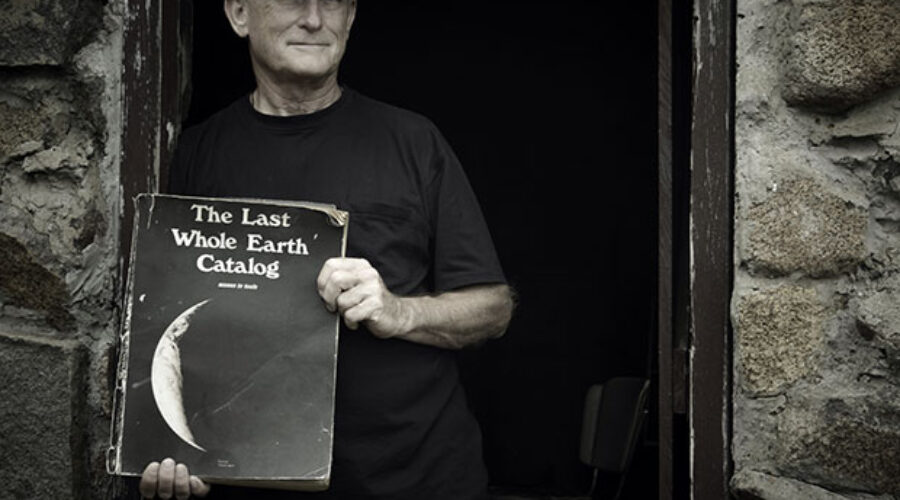 I DESCRIBED in an earlier article how we had trekked along the southern side of the Mt Wellington summit road looking for the lead to Luckman’s Hut, and how we had found it on our walk back to the car. We had been led by guesstimate and by a pale, fuzzy rectangle of a roofline visible on a Google satellite image.

We — Fiona Campbell and I — had follow the trail into an open forest of low-growing snow gums where alpine shrubland gives way to the treeline. There, blending into the surrounding dolerite outcrops, was the little hut.

And it was there past and present joined to complete the circle.

I was vaguely acquainted with one of the hut builders — Leo Luckman — when I lived in Hobart in past times, and with Roy Davies, another of the hut builders who was instrumental in rebuilding the hut after the ’67 bushfires. But it wasn’t just the joy of finding one of their stone creations hidden on the side of this mountain. The other thing that closed that circle in time lay within.

Inside the hut it’s dark, as is often the case in these mountain shelters, the only light that coming through the window in the southern wall and through the open door which never fully closes anyway, having been warped by the wet and cold of passing decades of mountain weather and now somewhat misaligned. A couple chairs, a bench seat, a fireplace and a bookcase in one corner. That’s all.

To this, the bookcase, I go over and pick up a few dusty items from the shelves, food mostly, stuff left here by those who have camped in or near the hut overnight. Old stuff not even marauding possums would touch now.

I’m looking at this, squinting at the odd packet held up to the weak late afternoon light coming in through the window to see what it is, or what it might once have been, when on the shelf below I see something like a large-format book whose black cover blends into the gloom so as to make it difficult to notice.

I pick it up and recognition and remembrance flood my brain. Here, in this little hut high on the mountain where treeline gives way to alpine heath, here in my hand I hold a copy of one of the icons of my younger years, a book whose pages I flicked through in the city down below all those decades ago. It was none other than The Whole Earth Catalog.

How did it end up here, in a small stone hut high on Mt Wellington? Who brought it up here and left it? Why? These are questions without answers.

I’m sure that you who were present in those days will remember the Catalog as the go-to place for ideas and tools for society’s footloose and innovative edge of the 70s. It has been described as ‘the internet before the internet’ because it printed user-generated content and because it provided access to all those tools, those books, those ideas that we might use in recreating our lives as something different to what society then offered us. I flick though the pages as I once did in the city below.

This edition that I hold in my hands is The Last Whole Earth Catalog. It wasn’t. The creation of Stewart Brand, the publication first appeared in the restive Spring of 1968 and was published in successive and occasional editions and in the form of sister publications until 1998. After the 1970s, these became more specialised and reflected new trends in society, especially those Stewart Brand had been involved in.

There was a Whole Earth Software Review that appeared in 1984 at the dawn of the personal computer era in which Brand played no small part (see: Fred Turner’s From Counterculture To Cyberculture). That was followed four years later by a Catalog focused on communications, and, finally, by the 30th Anniversary Celebration edition at the end of 1998. The Catalog’s most socially influential period was, perhaps, between 1968 and 1972 when it maintained its unspecialised, encyclopaedic format as a compendium of ideas, books and tools.

I once owned that first 1968 edition and I still have the Millennium Whole Earth Catalog in my bookcase at home, published in 1994.

It’s coming into late evening now and, as we prepare to depart this little stone hut, the gift of people I had known in the past. I replace the Catalog back where I found it. Perhaps, I think, others will gain from looking through it and, perhaps, some will realise the value this volume gave to the many that devoured the content of its pages.

Finding the Whole Earth Catalog was a surprising and poignant moment for me and it raised recollections of past times that over the years have remain buried deep in my brain waiting for the right trigger, the right moment, the right book to surface and to make me feel thankful for times distant and for times present.

So, here I stand in the photo with the Catalog in my hand, a tangible link to the past, to the city below, to friends now widely scattered and to those no longer with us. Circle closed.

From Counterculture To Cyberculture: Stewart Brand, the Whole Earth Network, and the Rise of Digital Utopianism: http://fredturner.stanford.edu/books/from-counterculture-to-cyberculture/