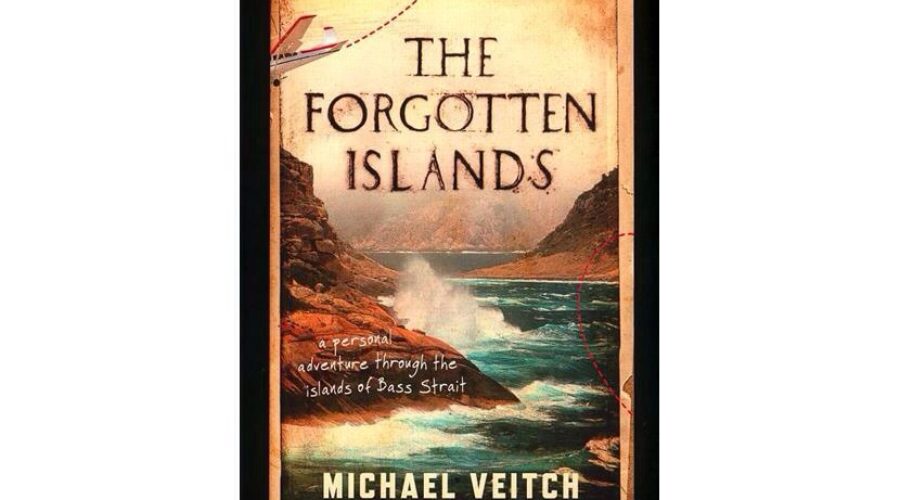 LIKE THE AUTHOR, when I lived in Tasmania I too felt the allure of the Bass Strait islands. Unlike the author, changing circumstances prevented me doing anything about it. Now I get to look down on Flinders Island every time I fly into Tasmania, providing the weather down there is clear. And down there… there’s those long empty beaches, those little islands off the coast, there’s Whitemark… and there, at the southern end of Flinders and within sight of Cape Barren Island, is the Stzelicki Range.

That allure I speak of I can trace back to the writings of Patsy Adam Smith who wrote about the Bass Strait islands and her own adventures among them back in the 1950s. After their publication, over twenty years were to elapse before I discovered her works and by the time I read Michael Veitch’s book this January, I had all but forgotten Patsy’s books, which he mentions.

Yes, that allure is still there and I’ll do something about it. Meantime, I’ve had the enjoyment of reading Michael Veitch’s The Forgotten Islands. I had meant to read it during my Tasmanian journey but I didn’t. Reading had to wait for my return to the mainland and to the city.

Veitch comes from an entertainment and journalism background, having spent time with the ABC. He also has a keen interest in World War Two aircraft, something that proved useful when, after several tries, he finally made it to Deal Island where he was able to identify the type of aircraft that crashed there in the latter years of that conflict, the wreckage of which still litters the ground.

GETTING THE TASTE – ALASKA
I think it was in the 1980s that I acquired a taste for the type of travel writing that Veitch’s book is. That’s books, I mean, about rough travel that describe the geography, geology, vegetation, weather and climate, animals and the people who inhabit remote landscapes.

It was writer, John mcPhee, that started it for me when I read his 1976 book, Coming into the Country, a tale of his travels in Alaska, his adventures there and the people he encountered. I think I was put onto McPhee when studying journalism at UTS, and I’m glad I was.

It is the descriptions of landscape, history and people that separate these types of deeper travel adventure books from the run-of-the-mill, daring-do stories of adventurers whose tales are mainly about themselves rather than themselves-immersed-in-landscape.

Veitch’s book describes how his obsession — I’m not sure that’s the right word on account if its usual negative connotations, for his is a positive obsession — started as a child when, holidaying with his family on Wilson’s Promontory in Victoria, he would look out to the offshore islands, fascinated. He would have to await adulthood before finding the opportunity to venture out there.

The book is a description of the landscapes, the people, the history, the geography he encounters over three journey into the islands. First up is Three Hummock Island off Tasmania’s northwest coast. What follows are his time on King and Flinders islands. It is from Flinders that his third attempt at reaching isolated Deal Island, with its lighthouse high above the sea, is realised.

BUMBLING ADVENTURER
Veitch’s is an adventure over time, not the tale of contiguous travel in the Strait. Like many of us he fits his journeys into available life-space, between commitments.

He comes across at times as the bumbling adventurer, someone poorly prepared for what he does, however this merely adds a humanising element to the story and makes it read as though visiting these islands is something almost anyone could do. Veitch’s is not the tale of some professional adventurer, some daring thrill seeker. It is the story of the travels of an ordinary man fulfilling his dream, and that’s something we all should do.

In his tale, which you could regard as a type of adventure travelogue, he meets people, describes places and introduces history — maritime history, European history and the history of the Tasmanian Aboriginal people who pined there on their Cape Barren Island settlement as they looked across the waters to their Tasmanian homeland, so close but so unattainable. This is a story of shipwreck, isolation, daring and geography blended with the sadness of a people lost.

A BOOK FAR TOO SHORT
I would have liked Michael to have visited and included the lesser islands that dot this stretch of treacherous water between King Island at the western entrance of Bass strait and Flinders at its eastern.

Maybe he would have liked this, too, for there are many isolated, deserted, dangerous-to-shipping outcrops in these waters that call out for a visit.

I also would have liked a longer book, one with more stories of the islands he visited, their geology, geography and history. What he describes he does well but it leaves you wanting more of the same.

WORLD BETWEEN
This is a loop story, one that finishes where it starts. And where it starts is with the story of a boy fishing from a rock shelf at an isolated inlet on Deal Island, and with something in the water. This is also where it finishes, with the resolution of that story, but I’m not going to relate it. That would spoil your reading.

Veitch’s is one of those well written, easy books to read, something you would do accompanied by a chilled glass of white wine on a lazy summer Sunday afternoon, an atlas at your side to locate the islands he visits.

But be warned if you’re an armchair adventurer. this book might force you out of your seat to book a flight to Currie or Whitemark, there to set out on your own exploration of these overlooked islands, islands that are the world between.