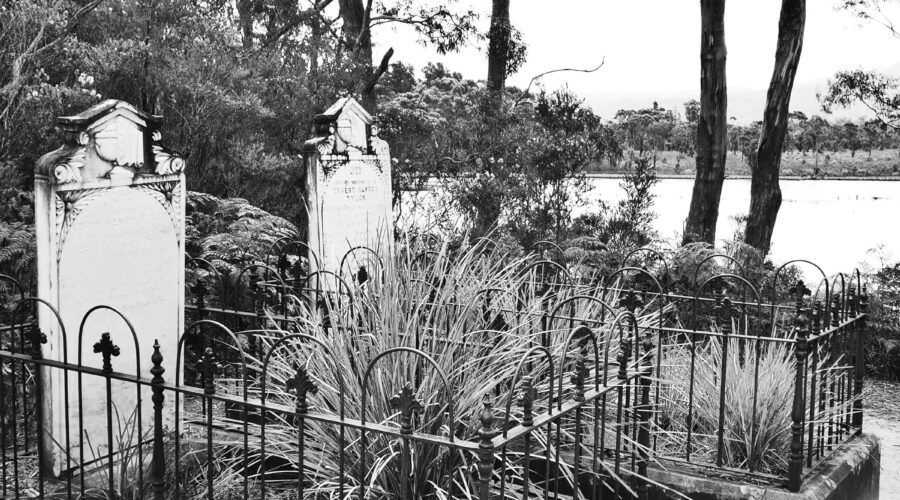 In the scrub, by the bay — a rediscovery

IT WAS AT THE END of 2104, December, when I accidentally rediscovered the Tyler family graves.

My discovery of them was back in the 1970s when I was with a group bushwalking down that way. The only person I recall from that walk — and it’s now something of a vague, poorly-recalled memory — was Arthur Knight. Face framed by a trimmed black beard, Arthur was one of those wiry, tough bushwalker types. He worked in the city at the Hydro-Electric Commission, an engineer, if my memory serves me well.

On that day, and I recall it as a sunny, warm weekend day, I think we must have followed the route of the old Ida Bay Railway, a narrow gauge line that once connected the dolomite mine inland with the wharf where the mineral was loaded onto a ship and sailed up the coast a way, to the processing plant at Electrona.

The Tylers were a pioneering family and their story is like that of so many of their kind — everyday hardships that were the way of life there in the forest, by the bay in what was then, and still is to some extent, an isolated place. I’m talking about the end of the nineteenth century.

But that rediscovery… I have an old colour slide of the graves taken on that first visit. Looking at it, I would wonder where it was that I had made it. Sure, I knew the part of the island where it was, but just whereabouts down there I could no longer remember.

In the late 1970s the Ida Bay railway was restored as a tourist journey and thanks to that, my rediscovery was made. So it was that in the December of 2014 we were trundling slowly through the tea tree scrub that occupies the poor coastal soils hereabouts. The tiny engine, the driver had explained, was a 1941 model, however it pulled the three or so open carriages without difficulty. It was a leisurely journey through the bush and, like that day I first encountered those graves, this day too was a warm, sunny one.

A little time passed as we moved slowly through the flowering scrub. The driver told us that botanists had recently counted 200 varieties of flowering plant hereabouts. Then the train stopped. We could get out here, the driver said, as there was something to see.

This we did, and looking through the scrub towards the bay my past linked abruptly into my present, for there they were — those old gravestones of my colour slide taken all those decades ago. Rediscovered.

The Ida Bay Railway is a worthwhile journey of a couple hours from the station just south of Southport in Far South East Tasmania.