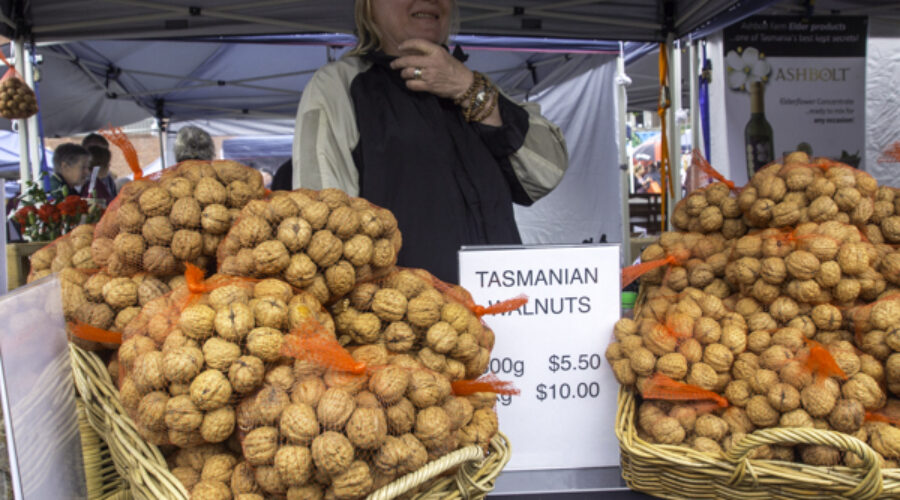 The Community Food Movement: An alternative — the community food system

WE CAN IMAGINE all of the ways we obtain the food we eat as a single, encompassing food system containing numerous food pathways from farm to table. To make comparison between those pathways, however, it is convenient to think of two separate but parallel food systems.

What we might call the ‘mainstream’ food system — ‘food supply chain’ would be a more appropriate term as it describes the path followed by food from farm to kitchen — is that utilised by most of the population. Food is:

…produced by farmers and graziers > bought by food processing companies who turn it into food products by cooking, bottling, preserving and packaging > sold to food retailers like shops and supermarkets > bought by the people who will eat it or by cafes and restaurants that will cook and sell it to diners.

That’s the general pathway of the food retail chain, however there are other pathways:

These are the common, commercial food supply chains found worldwide.

In the early 1970s, perhaps inspired by the increasing popularity of growing food in organic home gardens, food buyers started to seek a more direct way to intervene in their food supply. Out of this would later emerge the organic food industry, in the 1970s still very small in value, product range and farmer participation. It was linked to health concerns about the presence of synthetic agricultural chemical residues in food. The response took two directions:

It is these developments that led to the origin of what we call ‘community food systems‘ and to which we can trace what today is a diverse social movement around food.

It is at this time, the late 1960s and the 1970s, a time of growing awareness of food issues around conventional agribusiness, the emergence of the organic gardening movement and the first of the community food distribution systems, that we can say  that what we now call the ‘community food movement’ has its origins. In the following decade, the 1980s, the movement would be propelled by permaculture design practitioners, permaculture appearing in the closing years of the 1970s, who took food production, and later distribution, as their prime focus.

Success at home growing and setting up food co-operatives, or what are sometimes called, ‘box systems’ — because they supply members with a weekly box of organic or other food — led to the development of other community food systems. Eventually, these community food systems moved from the small number of early adopters of the 1970s into the social mainstream where today they are found in the form of community initiatives as well as small social and for-profit businesses.

Compared to the mainstream food system, community food systems are still small in their number of participants. This is due to a range of factors such as:

We might then define the community food movement as a social movement that meets the needs of its participants for a better food system that provides the types of foods we prefer, produced and distributed by means which we prefer to support, and that is economically and socially fair to farmers, food processors, retailers and buyers.

While the term ‘community food systems’ describes the different types of enterprises linking farm to table, the term ‘community food movement’ includes those enterprises as well as the beliefs, assumptions and knowledge, the practices and the economic and political components around this alternative food system. This positions it as a parallel food system to the mainstream that is sometimes in opposition, sometimes in collaboration with it.

Community food systems take two primary forms: those of the voluntary community sector and those that operate commercially as small businesses.

Lets look at these a little closer.

Food systems within the voluntary community sector are non-commercial in the way they operate. They take two pathways:

Social enterprise takes any operating surplus, that in for-profit businesses would be distributed as profit, and reinvests it into the business. This gives social enterprise its not-for-profit structure. Such businesses are usually set up to achieve some social goal such as supplying particular food types to particular markets. Because of this they are also known as ‘social businesses’.

Small for-profit business may be established, like social enterprise, to supply particular foods to particular markets such as organic food buyers. They may operate from shopfronts or as home delivery services.

Farmers’ markets are a popular type of for-profit enterprise in which farmers direct sell to the people who will eat their food.

There has been discussion as to whether the traditional greengrocer belongs in the community food enterprise category. Those supporting their inclusion say greengrocers provide fresh foods like fruit and vegetables through businesses that are too small to stymie the opportunity for others seeking to enter the industry, unlike supermarkets. Much of the fresh foods they sell are produced within the country.

Those uncertain of their inclusion say they offer a business model no different to the conventional and lack a stated commitment to selling Australian foods, especially those grown in the region. In other words, they are conventional businesses without the social goals of social enterprise and voluntary, community-based initiatives.

These are the general sorts of enterprises populating voluntary community, social enterprise and small business food systems. They have leaky boundaries, however, so can overlap in operation. For example, there might be little difference to an organisation labelling itself an organic buyers’ group and that calling itself a food co-op when both operate as weekly pick-ups for members’ food boxes.

Food co-operatives were the first of the community food systems operating as not-for-profit businesses in Australia. They were joined after the turn of the century by CSAs.

There had been attempts to start CSAs in the 1990s. Two that operated in the Sydney region, dating from that period, traded for some time but eventually folded.

One was located on the NSW South Coast a couple hours drive south of Sydney. It proved to be too far away from its main client base in the city. Another folded when the organic farmer supplying the CSA, and who had started it, moved away.

Those examples demonstrate the vulnerbility of CSAs based on production from a single farm, however single-farm CSAs have been successful, with Hunter region CSA, Purple Pear Farm, being an example.

Later enterprise based on the CSA model, such as Sydney Food Connect (which later sold to Ooooby, another iteration of the CSA), Brisbane Food Connect and CERES Good Food source from a larger number of farmers. If one supplier closes, the enterprise continues, simply finding a replacement.

The single-farm models are generally started by the farmer. Those sourcing from a greater number of farmers are usually established by the CSA enterprise itself.

In the conventional market system it is the wholesale produce market and the distributor and retailer that are the middlemen. In the CSA model it is the CSA itself that fills this role.

Farmers deliver to the CSA’s urban depot where the produce is batched into individual orders, previously placed through an online ordering system, by paid staff and then delivered, all within a few days so as to retain freshness.

The middleman role is necessary simply because (assuming there is no weekly farmers’ market nearby where individuals can buy their food directly from farmers themselves) it is necessary to provide the service at the scale required and to provide continuity. It also makes delivery conventient for farmers.

CSAs have proven to be an effective way for busy city people to obtain the food they prefer and as a means of contributing, through their purchases, to the livelihood of local farmers.

We look back to the 1970s to find the origin of Adelaide’s Clarence Park Food Co-op and the mid-1980S for NSW’s longest-running co-op, Alfalfa House Food Co-op. These two co-ops demonstrate how long food co-operatives have been trading in our cities and suggest that they have a good future ahead of them.

Co-ops trading from a shopfront face the challenges of conventional, for-profit businesses, however, and can be challenged by cash flow. Like other businesses, co-ops have rent to pay for their shopfront, pay for utilities like electricity and water and pay for the products they sell. This I learned while director of Manly Food Co-op on Sydney’s Northern Beaches. Like that co-op and the large shopfront co-op in Katoomba in NSW’s Blue Mountains, some employ a manager, at least on a part-time basis, so that they have continuity in stocking, accounting and opening hours.

Crewing the checkout, stocking shelves, cleaning and serving customers is usually done by member volunteers who trade time for further discounts in addition to those usually applying to members. A few of the larger, like the Blue Mountains Food Co-op, have paid staff.

Most stock as many organic products as possible and usually obtain their fresh fruit and vegetables from the city’s wholesale organic produce market. Some, like Manly Food Co-op, also have a low-waste ethic and select products that are minimally packaged or packaged in recyclable materials.

That’s co-ops trading from shopfronts and selling at normal retail price to non-members and at a discount rate to members. Others have no shop premises and meet weekly at a venue. Here, fresh foods and other products obtained from the city’s organic wholesale market are divided into individual orders (this can be a convivial, social activity) that are collected by members.

Clearly, this is the more economical type of food co-op to manage. Some, like Sydney’s Rhubarb Food Co-op, have taken advantage of the local council’s offer of a free premises for the weekly food distribution.

Food co-operatives have been a part of Australia’s urban landscape for the past 35 and more years and although they do not proliferate at the rate of supermarkets they offer a more personalised, far more pleasant and convivial way to shop for food and groceries than the industrial shopping experience of the supermarkets.

The Bulk Food Co-ops in Australia Facebook (https://www.facebook.com/notes/quirky-cooking/bulk-food-co-ops-in-australia/226374137379602) in 2015 listed a total of 56 food co-ops across the country, however this is likely an underestimate.

Community food swaps are relatively new. While gardeners have swapped produce over the back fence for many decades and community gardeners share their produce, the organised food swap only started to appear in the opening years of this century.

The more organised swaps have their own methods for receiving and swapping produce. Some utilise weekly collection evenings for existing food co-ops while at least one has, with permission, set up in a public park in Adelaide.

The swaps have social utility as a means of exchange in that they give value (not monetary value) to excess garden produce that might otherwise not be used, and this value is the basis of their exchange.

All part of the movement

As the community food movement’s production and distribution methodologies, all of these community food systems are the practical initiatives underpinning the broader movement.

Without them the movement has nothing of practical worth that can be copied, adapted and implemented to create social value and utility.