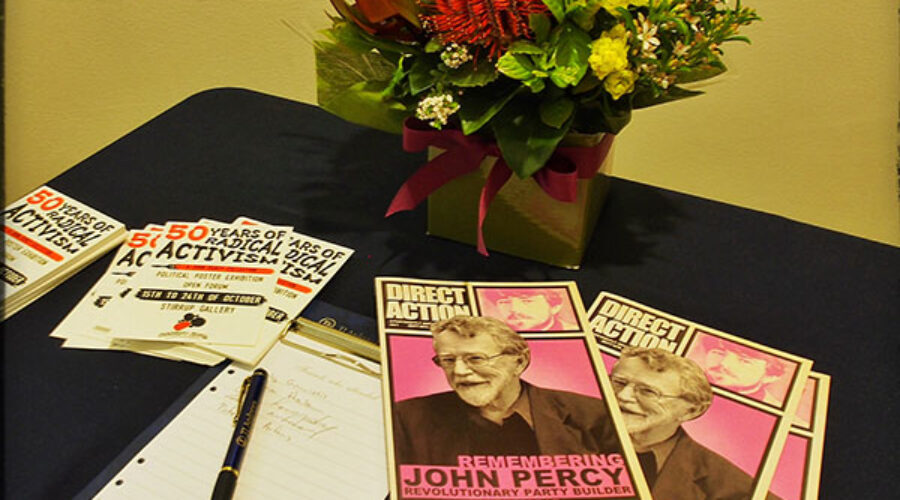 WE SAID GOODBYE to John yesterday afternoon. Around 100 gathered in the restored Art Deco ambience of a room in Erskineville Town Hall to hear reflections on John Percy’s life from his family and from those who had worked with him over his 50 years of activism.

There at the front of the room beside the speakers was John, his coffin a plain wooden one flanked by the colour symbol of what he stood for — a red flag either side. It seemed appropriate that another of John’s political lineage looked down over those gathered there that afternoon. Backlit by the afternoon’s light so as to cast its rosy glow over those below as if to signify its approval of a life lived unwaveringly in pursuit of a better future for humankind, was Cuban photographer, Alberto Korda’s famous image of Che Guevara.

Part of the landscape

“We are all part of the landscape of the Left”, John’s daughter, Emma To, told those gathered. She explained how she had joined Resistance, the leftist youth movement, at 12 years old and later spent time in Venezeula. She went on to make some critical remarks about Leftist groups and parties.

It was from Emma that we heard of a different John Percy than many of us had encountered over the decades. This was not John the politico but John the family man, John who made home videos with Emma, John who had a happy home life. For me and perhaps others, listening to Emma rounded out our impressions of the John we had known.

Speaking from his hospital room by recorded video, Max Lane said that John’s personality never became diffused in the organisations he was a member of even though he was a team player… “he was himself but he was also a member”. John viewed those who joined as people with potential, and he was “humble and unapologetically stubborn in his ideas, for what he thought right”.

“The Percy brothers — you loved them or you hated them, depending on what side you took”, he said. Even those who had stepped back from activism admired John’s tenacity, Ian said, concluding that John would “inspire a new generation by example”.

Alan Myers appeared in recorded video from Cambodia, explaining that history is less the past and more something that is still with us and that it can be used to modify the future. John, a man who never stopped learning, didn’t expect people to believe something he had said just because he had said it, Alan explained.

The two had met in Sydney at the Third World Bookshop in 1969 when it was at 35-37 Goulburn Street. That was during planning for the Vietnam Moratorium (and here) events that brought hundreds of thousands on to the city’s streets.

Diane Fieldes, the final speaker, was drawn into John’s political ambit when she bought a copy of the newspaper, Direct Action. She pointed out that John’s political career — his political life — had started back in 1965 and that it had been “a remarkable life that John has lived… he was immensely kind while trying to direct you”, Diane said.

May I be allowed a few observations?

I wrote earlier, on being informed by Yvonne Gluyas and Stephen Lomas that John had left us, that he was the last of the Bob Gould/Percy brothers troika that created what has been a sometimes successful, sometimes divided and troubled but ultimately persistent political movement that translated socialist values and ideas for changing times. Yvonne and Stephen, who I mention above, will know this for they, like me, were there at the dawning of that movement — what went by the name of the ‘New Left‘ — as the decade of the 1960s came to its end. Let’s be clear that this troika, though having physically left us, remains ever-present in the spirit of their ideas, their example, their leadership. Even those of us who have moved away from the Left will have their own memories of John and their remembrance of his quietly energetic, intellectual and reasoning presence.

A persistent political movement I called it above… and attesting to that were the number of younger people at that recognition and celebration of John’s life, his funeral. They provided evidence that the movement is undergoing intergenerational change, as must any social movement that aims to endure.

It was the plastic cups of red wine served after John’s funeral that reminded me of the flagons of rough red from the Star Hotel down Goulburn Street, and the parties and conversations the wine lubricated there in the backroom of the Third World Bookshop in the days when John was young. And his brother Jim, too, of course, and the rest of us from that time when John became a presence in our lives even though for some that would span only a few years.

Over finger food and those cups of red after John’s departure, we mingled in small groups and shared memories of our encountering him. One of my own conversations was with Gordon Biok, who had been among the first inhabitants of those rooms above 35 Goulburn Street, the Third World Bookshop, and who had been there when the organisation that would in 1967 become Resistance, a Percy brothers/Bob Gould creation, was known as SCREW — the Society for the Cultivation of Rebellion Everywhere.

The speeches and reflections on John’s life finished, the room rose, clenched fists raised in the classic leftist salute, and sang the anthem of the global socialist movement, the International. It was a rousing sendoff, and fitting.

John was carried down the aisle by his peers and, as the hearse turned slowly out onto Erskineville Road, a final farewell was said as those from the ceremony lined the footpath, fists raised, red banners hanging brightly in the fading light of late afternoon.