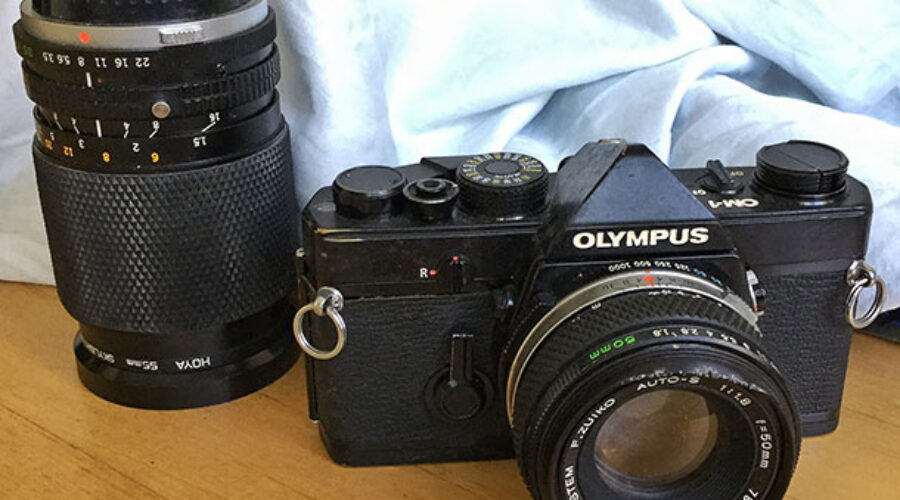 The OM1 — a photographic tool for the mountain walker

A FEW YEARS back my partner and I decided to catch the lake boat from Cynthia Bay to Echo Point hut on Tasmania’s Lake St Clair, then walk back along the Overland Track where it follows the lake shore through the tall timber of the dark, temperate rainforest.

It was only a day walk but with the fungi, the trees, the tall ferns of the forest and the occasional views across the lake’s silvery grey waters to the Traveller Range on the far side, I stopped frequently to retrieve my Canon SLR from my pack, take photos, then pack the thing away again only to repeat the process a little further along. I carried my camera and associated equipment in an old Mountain Designs bag, a padded, compact bag that I bought years ago. This went into my day pack and in there it took a lot of space.

The start and stop walking involved in bush photography took me back to the late 1970s when I had earlier followed this and many other tracks and off-track routes through Tasmania’s mountains.

Then, sleeping bags were bulky. Tents were heavy. The packs themselves, thick canvas sacks attached to external steel frames, did nothing to lighten your load either. Add up the weight of all this equipment then add your food, your small bushwalker’s stove and extra fuel, a change of clothes and your wet weather gear and the last thing you want to have to pack and carry is a bulky, heavy camera. But in the seventies that’s all you had.

At the time I carried a Canon FTB, a sturdy, metal bodied SLR fitted with a standard lens of 50mm focal length. It was one of those cameras where you set the exposure manually by matching a needle visible in the viewfinder with a little circle — the ‘match needle’ system. Metering was centre-weighted. The camera wasn’t compact or light weight but it was reliable. And it was tough, the kind of camera that bushwalkers favoured.

Earlier, I had carried a Minolta SLR of similar characteristics though without any built-in exposure metre at all. The Canon, and the sturdy old Pentax Spotmatic with its stopped-down metering system that darkened the viewfinder image as you closed down the aperture, was the sort of camera equipment bushwalkers lugged through the mountains in those days. And there was no sign that camera manufacturers would do anything to lighten their load or free-up space in their packs with smaller, lighter weight cameras.

Until the Olympus OM1 came along.

Brian, a bushwalking friend, was the first to buy one of these new cameras. He spoke about compactness and light weight — the characteristics that made the OM1 attractive to bushwalkers — and when I handled his camera I could feel what he was talking about. Its compactness was self-evident but was even more apparent when compared side by side with the Canon or similar camera. Simply holding the thing gave you this feeling of compact solidity and toughness. The OM1 wasn’t heavy, yet it had heft. And it had those sharp Olympus lenses.

Soon others bushwalkers acquired them. Why? Primarily because of their lower weight and bulk but also because they were a metal bodied, full systems camera with a range of interchangeable lenses available. Olympus had done something revolutionary and bushwalkers were willing customers.

The OM1 was a mechanical camera. All the tiny button battery did was power the light metre. Even when the battery was flat you could take photos by estimating exposure, a skill then part of the photographer’s kit. Exposure was set manually by matching a needle with an exposure indicator on the left hand side of the viewfinder. A + and – marked the degree of over or underexposure. It was a reliable method.

That day we did the day walk from Echo Point hut a few years back I had left the Canon 80-200ml lens behind as it adds quite a bit of weight and bulk. For the same reason I left my flash with it in the hut.

Your mind can wander when you bushwalk. You go into a sort of reverie or you start to think about stuff that you don’t usually consider. So it was that walking through the forest I speculated about acquiring something lighter than my Canon SLR. But what? There was nothing offering quality kit and quality images that was significantly lighter and smaller.

Until the Olympus OM5D came along.

Olympus to the rescue of the weary mountain walker again, just as it had done all those years back. The then-new OM5D seemed to reprise the OM1 experience of all those decades ago with a meal-bodied systems camera that was both compact and light weight compared to my Canon SLR. That’s the camera I take into the bush now, and with its weather sealed body and lenses it’s just what bushwalkers need, especially those trekking the misty, moist mountains of Tasmania.

My OM1 film camera with its standard 50mm, f1.8 and its compact 35-105ml. f3.5-4.5 lenses now sits in my cupboard. Sometimes I lift it out just to handle it, to feel its compact heft again, to peer through its viewfinder. Then I look over to my OM5D, which is something of a retro, look-alike design, and I think that here are two kin, a brother and sister if you like, separated by something like 45 years but still bearing the same family resemblance.

Whatever it is, both of those cameras have saved a lot of energy for tired bushwalkers and a lot of space in their packs, mine included. If anything, the OM1 and the OM5D are an exercise in smallness-with-function, a design exercise that raises just a little less sweat on the brow of the weary mountain walker.