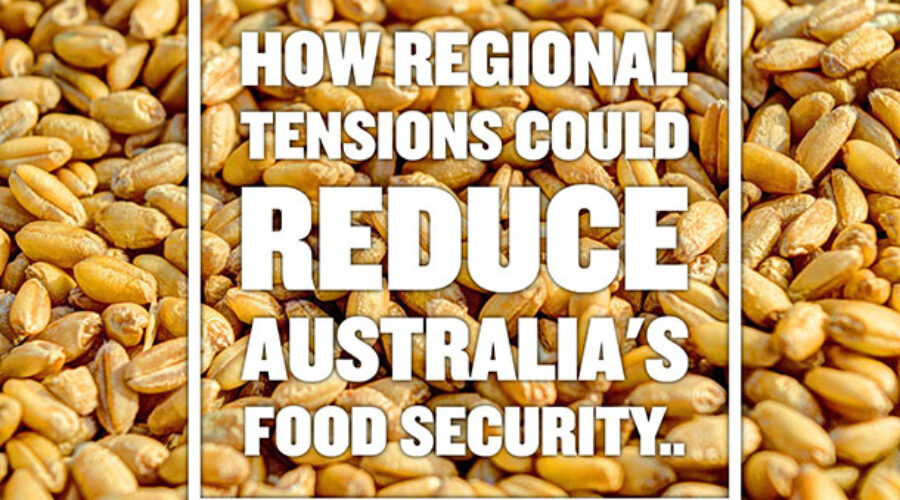 ONE DAY, a Chinese air force aircraft intercepts a US air force reconnaissance flight near the Spratley Islands. Risky flying results in an accident. Accusation and counteraccusation fly between China and the US and tensions increase to the extent that shipping, including that transporting food, is diverted from the South China Sea.

That diversion has not happened, but an accident like that hypothetical one has — the Hainan Island incident of 2001. Clearly, the tense situation in the South China Sea has the capacity to affect the global trade in food and, with it, the livelihood of Australian export farmers and our food imports.

It is not clear what regional nations and the US can do if China extends its sovereignty over the South China Sea. With naval and air bases on the islands China would be in a position to close navigation through the region and civil and military air passage above. There is already talk of China declaring an air defence zone over that part of the South China Sea. That would be to annex the region, not a land grab but a sea grab and a grab of whatever hydrocarbon resources — oil and gas, that is — lie beneath it.

At present, China is colonising atolls and building airstrips and docking facilities on them and the USA and its allies are insisting on the right to unhindered navigation through the region. There is potential for miscalculation and provocation to disrupt the more than $5 trillion in global trade that passes through the area.

How much of that trade is food and agricultural commodities I do not know, however were the tensions to worsen there may well be potential to affect Australia’s agribusiness trade with China and elsewhere.

China is now Australia’s largest agribusiness export market. The US is our defence partner. This creates tension were a confrontation that does not directly threaten Australia to occur.

There have already been Chinese intercepts of US reconnaissance flights and of the naval shipping of regional nations such as Philippines and Vietnam. With these nations having an interest in the oil and gas deposits below the South China Sea bed there is much at stake.

For the US, though, it is more than economic interest that is at stake. It is US strategic interest as well. Were China to deny the US navy access to a large area of the South China Sea, then its influence in the region could decline as would its ability to assist regional nations, including Taiwan, were they to be threatened.

National food security seldom figure when national security is discussed. But it should, for how secure is a nation if its food supply is disruptable? Ask that of the British in the Second World War.

This type of vulnerability is built into our global trade in food, and it is not only the South China Sea that is a geographic and navigational choke point where regional conflict could disrupt that trade. Conflict and instability among countries like Yemen and Somalia, on the Horn of Africa where there has already been piracy, make the Suez/Red Sea region one vulnerable to disruption. So, too, the Straits of Hormuz giving access to the Gulf states and the northern Arabian Sea region could be disrupted in any confrontation with Iran. Then there’s the South West Pacific and navigational access to Australia, and the straits around Singapore and Indonesia.

While it may be possible to navigate around these choke points, longer sea journeys would increase the cost of imported food.

It is risks like these that should be taken into account by the federal government when it deliberates agricultural policy. Here, I’m not talking only about the financial loss to Australian food exporters but the security of the nation’s food supply itself.

Australia has the capacity to provide much of what it eats and that capacity remains largely intact. Weakening it through increasing reliance on food imports and by selling agricultural land to foreign businesses which produce for export is risky policy. This is not an argument against food exports, more one about maintaining a capacity to feed ourselves.

Government can deploy economic incentive and policy to ensure our native food production capacity is retained. Limiting sale of large areas of Australian agricultural land to overseas interests, tax incentives and support for a diversity of regional food products and regional food economies would all increase our resilience to global food trade disruption.

When it comes down to the detail of national food security, the necessity to maintain urban fringe farms grows in importance. Rather than even more low-density, vehicle-reliant housing, state planning legislation should retain good agricultural land for farming. Housing can be built on marginal land.

This decade has brought a fragmentation of the world. Rather than the globalist’s dream of one world, one market, we are seeing the world break up. A newly-assertive Russia and its developing ties with China, the rise of the Islamic State in the Middle East — still there more than a year after its violent birth — the rise of China and the development of a multi-polar world are all increasing this fragmentation. Rather than a recipe for secure global markets we now have a clash of ideologies.

It makes sense, then, to ensure our own food security as a component of our national security, and to build an even stronger agricultural base capable of food import replacement were any of those global choke points to snap shut.