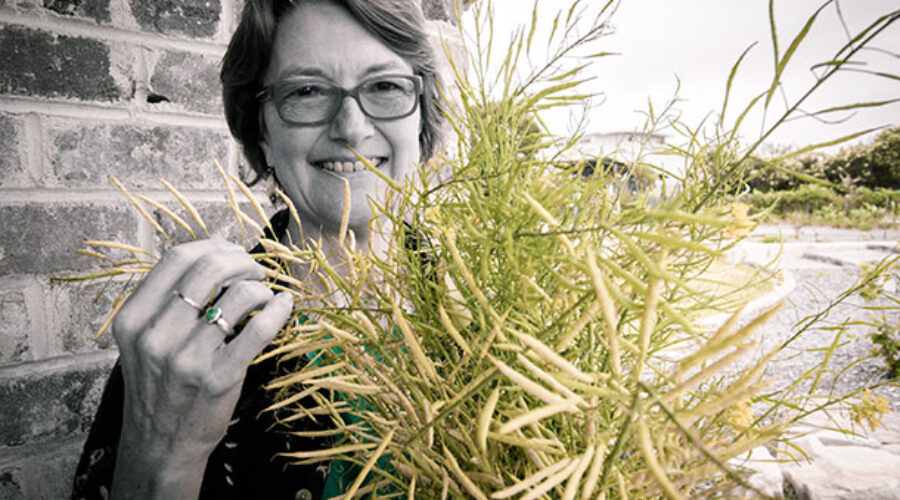 The Community Food Movement: Save your own, says Jane

The community food movement: a series about the emerging social movement around food…this time, a DIY technique for securing your own food supply from your home or community garden…

At Randwick Sustainability Hub, the educational component of Randwick Community Centre,  Jane Mowbray’s seed saving workshop taught participants how to produce their own seed rather than rely on distant seed companies…

THREE HOURS is really too short a time to learn about seed saving, but what a packed three hours it was.

There was Jane Mowbray, horticultural educator, Inner West Seedsavers‘ originator, president of the Australian City Farms & Community Gardens Network and retired teacher who still likes mathematics. There she was leading around 23 people through the intricacies of this unusual practice of saving the seeds of the plants we eat… our veges and herbs.

First, we checked out how plants are structured. That’s a rather clever piece of DNA-encoded bioengineering that grows specialised parts that work together to allow the plant to recreate itself plant after plant, generation after generation.

We all know about leaves — the solar arrays deployed by plants… the biochemical converters powered by photons streaming from the sun that convert carbon dioxide and water into biological energy and the oxidising gas known as oxygen. But what about the anthers, petals, styles and stigmas? Who knows what they do in this great dance of botanical life? Well, Jane does, and now all at the workshop does too.

Turns out some of these flowers are edible… and you don’t have to cook them. Nasturtium, borage and others were quickly named by the botanically savvy. Then there’s pollination which is a function of these flowers.

Permaculture co-inventor, Bill Mollison, used to say that birds were the mobile part of the forest. They spread seeds, expanding the forest and replanting it after disturbance. I can’t disagree with that, thought I would say that bees are the mobile part of the garden that spread plants through fertilising them and, at the same time, producing a runny, semi-liquid carbohydrate known as honey much beloved by that other forest-and city-wandering species, people like you and I.

Jane passed around some scented pelagonium flowers and some flowering herbs which were dutifully sniffed and explored by the workshop participants with the magnifying lenses issued.

” …it’s amazing what you can grow from your spice cupboard…

“Fantastic to grow”, exclaimed Jane, holding up as twig of coriander, ” …though it can bolt to seed… I understand there is a non-bolting variety available now”.

Someone asked about sources of seeds. After mentioning seed companies selling non-hybrid seeds that will reproduce true to type she said that ” …it’s amazing what you can grow from your spice cupboard… don’t underestimate this source… anything that is a bit old and out of date you chuck it into your garden and maybe a quarter, maybe half will germinate”.

It turns out that seeds can be extracted wet or dry. It’s less an option for any old seeds than a process for particular seeds.

Tomatoes, for instance. Jane demonstrated how you can scoop the pulp containing the seeds from a tomato, put it into a jar and add a little water then let it stand for a few days. The frothy stuff that appears on top is nothing to be alarmed at, said Jane, that’s produced by fermentation and that’s a good thing. When the seeds separate from the gunk they are filtered out and laid until dry on a piece of tissue paper placed on a plate. They keep for maybe three years so there’s no need to rush out and plant them immediately.

Dry seed extraction is a lot easier, as people found when curcubit pods were passed around. You simply break the pods and out tumble the seeds.

Our seeds — how viable?

Jane recommends seed viability testing for schools and teaching children because it demonstrates that mathematics is an everyday part of our lives ” …rather than something we torture children with”.

The maths comes in when you test your stored seed to see how viable it is — what proportion of the seeds are likely to germinate and grow. This is important for seed you have stored for some years. It isn’t hard to do this and even the maths is manageable because most of us walk around with a mobile phone with a calculator app in it..

…someone mentioned how cities were very biologically diverse places, with their extensive range of exotic flowers as well as natives and food species…

Lettuce, coriander, radish, borage — these are all flowering plants that attract bees and beneficial insects, said Jane, who recommended planting them in all gardens. They add to your garden’s biodiversity. On hearing this someone mentioned how cities were very biologically diverse places, with their extensive range of exotic flowers as well as natives and food species. That’s good news to bees and other insects, it turns out, as they aren’t all that fussed about where it is that the plants they visit come from.

In raising biodiversity Jane linked the microcosm of the home garden to the macrocosm of the biome, the suites of plants, animals and the geology that characterises a region, what we sometimes call the biogeology. It is made up of all those ecosystems we and our insect, animal and plant colleagues inhabit — the bush, the farms, the coasts, the cities. Making links like this contexts small initiatives and improvements, such as the plants we establish from our saved seeds, in their bigger contexts. Doing that is important because it shows that we can all do something that is positive and good.

Jane has led the seed saving workshop before and, as always, it is popular. I’m sure she’s destined to lead many more.

Recent workshops in the classroom-in-the-field:

A new classroom for Randwick