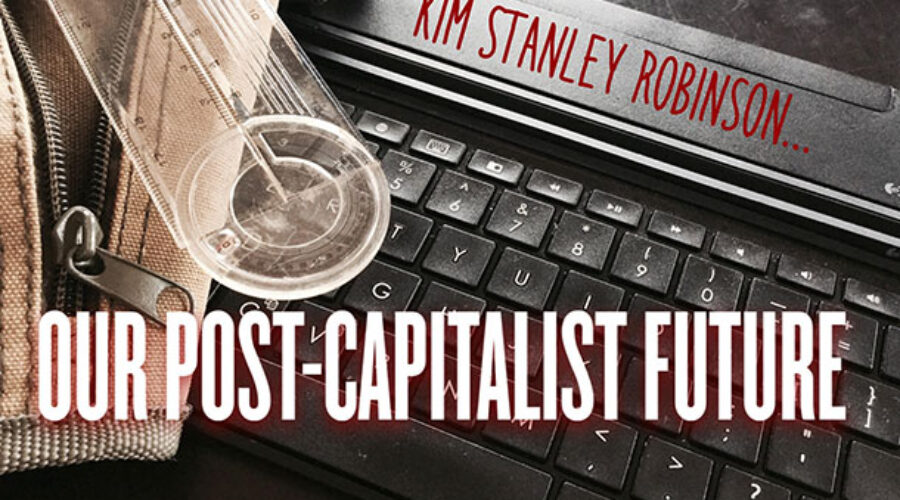 THE FUTURE — it’s not going to be a linear projection of the present, nor is it some kind of repeating cycle. So says noted science fiction writer and speculative futurist, Kim Stanley Robinson (KSR).

Imagining the future as some kind of extension of the past is erroneous because doing that misses the slowings and accelerations in economies and societies. It misses the plateaus when societies stay more or less unchanging for long periods of time and it is certain to miss the sudden, non-linear changes that bring chaos.

If you don’t believe non-linear change can suddenly emerge from the background, then how do you account for the sudden decline of the Arctic winter ice pack, the sudden appearance and success of IS in Iraq and Syria? Or, before that, the 2008 economic collapse and, 25 years ago, the destruction of the Berlin Wall and the collapse of the Soviet empire? I remember a German woman, a fellow journalist where I worked, telling me how the wall would never come down. That was about a decade before it was demolished at a time when the Soviet Union and it’s satellite states appeared as strong as they had ever had been.

An example of how imagining the future as a extrapolation of the present can delude and disappoint us was the failure to move to a fully-space-faring civilisation following the successful moon missions of the late 1960s. To the disappointment of many, that never happened.

…We can better imagine the future as tracing a spiral form in space and time, each loop being larger and more complex than what happened before…

If imagining the future as an extention of the present doesn’t work, what about thinking about it as a cycle, says KSR. That has a long history in human societies. But that doesn’t work either. It describes biological and seasonal cycles but it doesn’t work for human experience because at each loop of the cycle things are different. We can better imagine the future as tracing a spiral form in space and time, each loop being larger and more complex than what happened before.

So, it’s the Earth… we’re here… and we’re stuck with it

There have been four phases of capitalist civilisation, says KSR. It started with Genoa, then moved to Holland and the Dutch empire, then on to England and the British empire. That started to expire after World War Two. Now, we have the US economy that is dominating capitalism and we also have the rise of China and what some speculate to be the coming rise of India.

As capitalism moved from one empire to another it took different forms and it was based on new technologies. Genoa and Holland were mercantile trading civilisations, relying very much on naval design to give them the reach and cargo capacity needed to explore new countries, open new markets and transport goods. England’s empire relied initially on wind-powered vessels too, but it gained impetus with the new technologies of the Industrial Revolution such as the steam engine, as did the first phase of the US economy.

Now we find ourselves in an economic culture, a culture transforming from an industrial culture into one based on finance. This, speculates KSR, could be the end phase, the bubble in which people “try to make something out of nothing”. Does ruination follow?

The future of extra-terran resources

Access to resources is a basic need of any civilisation. For capitalism, access is critical to its market economies and it is the pursuit of those resources, especially primary resources such as minerals, energy and biologial resources like timber that clashes with the popular sentiment in favour of natural systems remaining intact. Those taking this view say that many of the resources capitalism needs to exploit are better left as biological resources sustaining our earth systems like the atmosphere, the oceans and agricultural soils. It was this sentiment that was behind the great environmental campaigns in Australia at the close of the Twentieth Century, the political battles for the forests, the wild rivers and the wilderness.

Retaining these natural systems is a motivation of those proposing we exploit extra-terran resources. Perhaps capitalism, or some other economic system emerging from it, could continue to grow by exploiting space-based resources, they propose.

NASA and other space interests are already talking about capturing asteroids and harvesting them for minerals. There’s talk of mining on the moon. For many, doing this would be a positive thing as it could move mining off the Terran surface where it has done so much damage. It raises the possibility that exploiting resources on other planets in the solar System could open up another great expansion for humanity and at the same time return parts of the Earth to natural systems.

…most of what we need we still have here on Earth, in quantity…

“We live at the bottom of a gravity well”, KSR reminds us. And while science fiction can write its way around that problem, escaping the Earth’s gravity well requires enormous energy. KSR says that there won’t be space exploitation without a space elevator, a counterweight in orbit with connection to the Earth’s surface up and down which an elevator can move.

Also countering the drive for space resource exploitation is the reality that most of what we need we still have here in Earth, in quantity.

We have this progression says KSR:

This leads to the question of what post-capitalism would look like. And that, says KSR, we don’t know.

He explores this further by quoting Raymond Williams, a literary critic, who pointed out that:

“Every civilisation is a combination of the residual and the emergent”.

Capitalism, therefore, is a combination of feudalism and the unknowable post-capitalism. But, if we can’t extrapolate the present and say this is what the post-capitalist future will look like, and if we can’t look back to history to say that the cycle is turning and the future will look like some period in the past, then how do we go about thinking about the future?

“I like to think
(it has to be!)
of a cybernetic ecology
where we are free of our labors
and joined back to nature,
returned to our mammal
brothers and sisters,
and all watched over
by machines of loving grace.”

So, if we don’t live in those worlds and we can’t foretell the future by extrapolating the present into it or by imagining some kind of cyclic pattern to time, where do we look for signs of the future emerging?

We have to imagine the world we want, says KSR, and imagine he has in his science fiction novels. He sees traces of a post-capitalist era, the emergent in the present as Raymond Williams put it, that he identifies as:

All of these things currently exist and many are the product of our connected, internet-enabled culture. This highlights the importance of hi-tech to creating a good future. Technology enabled the modern world and our future world depends very much on it. It is common knowledge that you can’t go back to some past time (and those proposing we do often see only the good things that were there, not the bad) and proposals to revive some part of it are rich in nostalgia and poor in imagination. As KSR says, the past does not repeat because at every turn of the spiral of time, things have changed. You can’t recreate what is past in the present.

KSR’s traces of the emergent future in the present paint quite a different picture to the econo/political system that has in the past been proposed to replace capitalism — socialism.

Those traces point to a more decentralised, less-governed, more self-managing future rather than the continuity of big goverment and big industry that traditionally comes with socialism. Worker self-managed industries like those of the Mondrogon co-operatives and of other, exiting co-operatives are different to industry in socialist regimes, though democratic socialists might be supportive of them. Nor is KSR’s the rosy future of the techno-optimists at the start of our digital culture.

A name for a certain type of history

KSR points to another component of a possible future: “By permaculture I mean a culture that can be sustained permanently. Not unchanging, that’s impossible, we have to stay dynamic, because conditions will change and we will have to adapt to those new conditions and continue to try to make things even better — so that I like to think the word permaculture implies, also, permutation.

” …if you think of yourself as terraforming Earth, and if you think about sustainability, then you can start thinking about permaculture and what permaculture really means. It’s not just sustainable agriculture, but a name for a certain type of history.

“I’ve been working all my career to try to redefine utopia in more positive terms — in more dynamic terms. People tend to think of utopia as a perfect end-stage, which is, by definition, impossible and maybe even bad for us.And so maybe it’s better to use a word like permaculture… which suggests a certain kind of obvious human goal, which is that future generations will have at least as good a place to live as what we have now.”

Speculating, KSR offers ideas for this better future. It would have some residual capitalism but it would differ to that earlier system in that it provides basic human needs — as defined by psychologist, Abraham Maslow in his well-known hierarchy of human needs — as public utilities, a “communal enterprise”.

Those basic human needs consist of clean water, health care, education, food, shelter, clothing and personal security. Without these, people find it difficult to engage in self-development as their focus needs always be on survival.

To this list I would add access to some kind of computing and communciations technology as it is even now very difficult to engage in the transactions of life if you are digitally disconnected.

The rest, those things not necessary for human life and for the creation of further opportunity, could be a capital investment market, which KSR says he would expect to grow fast.

A social role for permaculture

KSR clarifies a social role for permaculture that goes well beyond vague notions of creating a ‘sustainable’ society. This is even more important because sustainability, popularly envisioned as some kind of stable state or a state of being adapting within set boundaries, may no longer be attainable.

That is because those boundaries within which a more or less stable state can exist might no longer themselves exist thanks to the changes the Earth and its human societies are now going through. KSR’s version of permaclture fits well the goal not of a sustainable society but of a resilient society, one that can rapidly adapt to changing conditions.