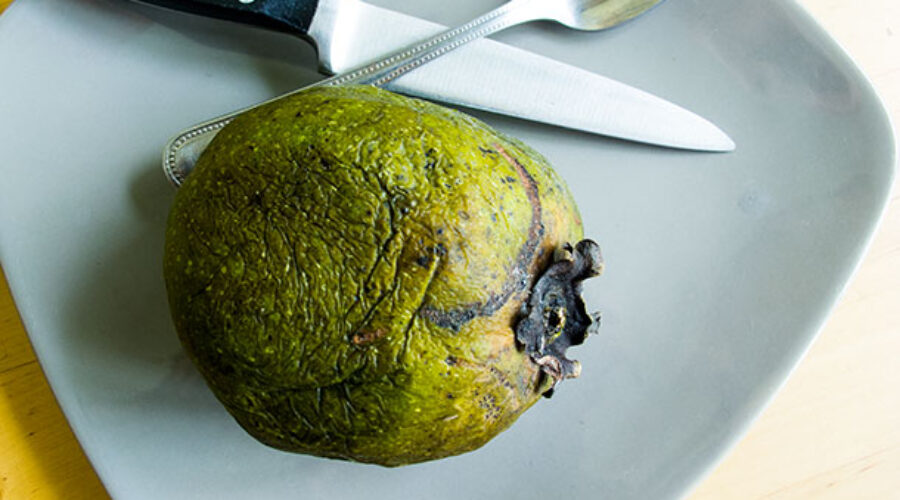 “Yeah, at last”, I responded, reaching over to take it from her and feel how over the past few days what had been a hard, green fruit the size of a large orange had become a soft, darker coloured fruit that was easily dented when I touched it.

“Yep”, ready to eat”, I said as I placed it carefully back into the bowl it had sat in these past couple weeks. “Maybe tonight?”.

The green fruit was hard when I had taken it out of the Ooooby delivery box, our regular drop of food mainly from Sydney-region small farms. Finding it was a surprise.

Ooooby is an iteration of the CSA, the Community Supported Agriculture model. It is the go-between for farmers within a few hours’ farm truck drive of Sydney and urban people who like their fresh food to be local food.

Unlike CSA’s that source from only a single farm, Ooooby, Brisbane Food Connect and CERES Fair Food source their supplies from a larger number of farmers. This provides continuity if a farmer drops out rather than risk closure of the CSA, as has happened in Sydney in the past.

“A black sapote!”, Fiona called out in surprise at seeing the fruit when we opened the box.

“But… not from Sydney region farmers”, I said. “Sapote forests are about as plentiful around Sydney as the banana plantation Ooooby gets the bananas it supplies from. Both come from up in the subtropics further north”.

“But the rest of the stuff is from Sydney region farms”, said Fiona.

“Yeah”, I relied. “If you look at the list on the page accompanying the box of food Ooooby delivered you see that it comes from up to five or so hours farm-truck drive of the city. Much like Food Connect up in Brisbane”

“That taps into a range of regional microclimates spanning the warm areas to the north and north-west to the cooler climate around the foothills of the Snowy Mountains down south and to the different farm products those regions grow”, she said.

“Which defines what really is ‘local food’ for Sydney. That distance supplies the varied range of products than help make a nutritionally balanced diet”.

That distance will be different for other cities as it depends on how far the market gardens are from the cities. Sydney is fortunate in that the agricultural soils to the north west and south west of the city, which were where the first farms were established in Australia, are among the most fertile and productive in the state. It is this productivity that makes imporant preserving them for farming rather than for urban development. Those urban fringe farms, many are small, family-owned market gardens and orchards, feed the city with much of its fresh produce and sustain a fresh food industry based on regional foods.

That black sapote was too tempting to me, and after Fiona set off to walk to work I couldn’t help but carefully cut the thing open to see what was inside. Black gooey stuff. The peculiar thing about the black sapote is that it is ripe and ready to eat when it gets soft and squishy and resembles some kind of dark pudding. And that, its appearance and texture, is why it is also known as ‘black pudding fruit’.

Now, there it sits in the fridge awaiting Fiona’s return. Tempting it might be, but to eat it by myself would be to tempt too much trouble.