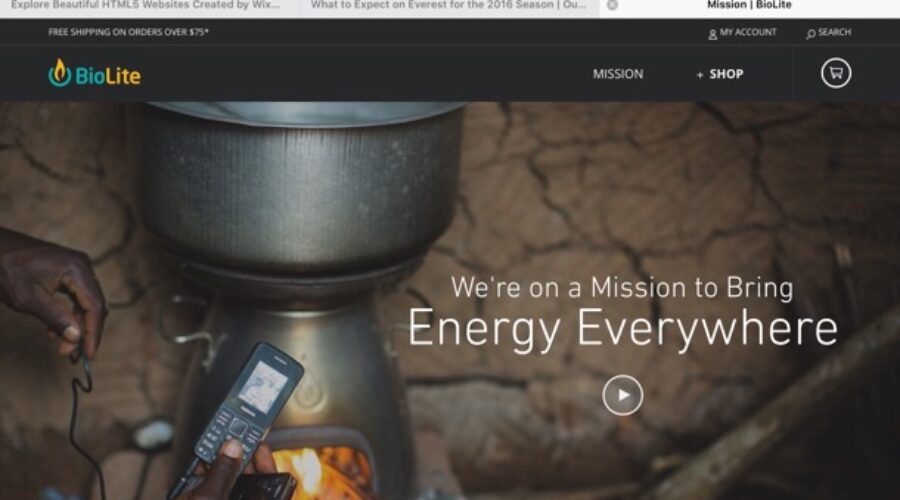 Let’s support, not nitpick companies trying to make a difference

Patagonia is improving its materials supply chain and using a portion of the company’s earnings to preserve wild places. Gaol Zero and Biolite are using a business model of sales in developed countries to finance the distribution of energy technologies in lesser developed countries.

“We build technologies that address cooking, charging, and lighting, which are the most energy intensive needs of low-income families”… Biolite.

Smoke inhalation from open cooking fires is a leading cause of illness in developing countries. Biolite supplies low-smoke emission fuelwood cookers equipped with a small thermoelectric generator for recharging phones and mobile devices.

The increasing use of mobile telephony and the mobile internet in developing countries is another reason that a reliable and cheap source of clean energy, along with clean water, good food, sanitation and health services are the basics without which any further development is unlikely to take place.

Technology transfer to lesser developed countries has been fraught with issues around the maintainability of the technology with locally available skills and funds, and training and scale.

It was EF Schumacher with his book, Small Is Beautiful, and the Intermediate Technology Development Group that emerged from that in the seventies that brought to international development a focus on technology appropriate to smaller scale development.

Encountering Biolite’s story on Medium reminded me of how the notion of what became known as ‘appropriate’ or ‘intermediate‘ (intermediate between costly, large scale high-tech and more efficient than traditional technologies) technology transfer has been a focus for international development agencies.

I know that because I worked for one such agency. My role was primarily in the food security/farming systems area where I worked with Tony Jansen, one of the most experienced people to come out of the permaculture design milieu working in international development (he is presently living and working in West Africa). The agency also did technology transfer in the form of village micro-hydroelectric systems. After using dim and stinky kerosene lamps for generations, those who have not seen the first electric light switched on in a rural village can have no idea of the joy with which that is received.

While working in international development I spent many days writing applications for grants to government. Whether or not you get the grant determines whether or not a community in a developing country gets the assistance it has requested. Government is a chancy and uncertain source of funding.

The model Biolite has adopted is at least as good and, I suspect, better in many ways than reliance on what are usually short term government grants:

“Our customers live in places where the grid doesn’t exist, so we bring the grid to them — and give them control of their own personal energy ecosystems so they can generate, store, and use energy as they see fit”… Biolite.

The trouble with critics

Like Goal Zero, Biolite is a technology development business. Not many years ago we would have described it as part of the ‘new economy’, that around emerging technologies. As does Goal Zero, Biolite spends a portion of its earnings on trying to do something good in the world.

“If we can expand energy access, we can improve health, combat climate change, enable communication and education, generate income, and reduce inequality”…Biolite.

This is the sort of initiative that the environment lobby and other reformers have been crying out for business to do for some time. Usually that falls on the deaf ears of the business class, but just occasionally it finds fertile ears with an imaginative brain behind them.

Sure, the model might have imperfections and, sure, it might be small scale (as is the work of all those small international development NGOs), but what I find disturbing is how some of those who should support efforts to make things better can turn around and criticise them.

Let’s take one of those businesses I have mentioned as an example — Patagonia — which produces equipment and clothing for people engaged in adventure sports. Last year, the animals lobby, PETA, attacked rather than negotiated with Patagonia for unknowingly buying merino wool from Argentinian graziers who allegedly sheared their sheep with what PETA claimed to be cruel methods. Patagonia suspended purchase of the wool until the graziers adopted better practices. Those with a healthy perspective on the world know that imperfection exists in all well-intentioned efforts and is reduced with time. They also know that dialog with companies that are open to discussion works better in the long term than grandstanding and criticism.

Patagonia was trying to source its raw materials ethically yet PETA saw fit not to congratulate and say ‘we can help you do this better because there’s a problem with your Argentinian suppliers’, but to attack a company they could have been supporting for what it was trying to do.

This is not the best way for those interested in sustainable development to act. It creates enemies rather than builds alliances. For those of us who recognise that PETA has a role in alleviating the cruel treatment of farm animals but who also support Patagonia for its efforts to improve its supply chain, it merely alienates us from PETA.

I find that environmentalists and some permaculture practitioners behave in a similar way to PETA when they see a company or some organisation or individual doing something good and then cherry pick the less-than-perfect parts of it for criticism. Yet, we should ask just what it is that these self-appointed critics have done that attempts anything significant? Is their work without imperfection?

Rather than fault-find businesses making an effort to improve things, perhaps a more enlightened approach would be to recognise the good in what they do and, when thinking of purchasing a product such as they produce, buy theirs’ so that a portion of your money goes on to do something good.

“…access to clean energy has provided her family with a ripple effect of positive outcomes”…Biolite.